The Wire Troll: Angel in the Outfield 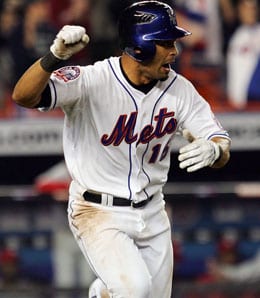 Angel Pagan has had plenty of reason to celebrate lately.

David Ortiz is denying he ever used ‘roids, but we’re here to inject a little life into your Fantasy lineups with our waiver wire recommendations, which grow more important as the season’s end closes in.

Angel Pagan, OF, New York Mets: The 28-year-old journeyman has done an admirable job filling in for the injured Carlos Beltran. In his past 10 games, Pagan has smacked two homers, driven in 12, and chipped in with two thefts and a .310 BA. It appears that Beltran is at least another couple of weeks away from returning, making Pagan a solid addition in NL-only leagues in the interim.

Will Venable, OF, San Diego Padres: In his past 10 games, the 26-year-old has gone deep five times with 14 RBI, and is hitting at a .395 clip. In 200 at bats at Triple-A Portland, he managed 12 homers so the power potential is very real. The Padres have stated they plan on giving their younger outfielders the opportunities down the stretch, so playing time should not be an issue. Good call, San Diego (which is more than we can say for the team’s decision to extend Bud Black, who has guided the team to wins in less than 40 per cent of its games in the past two years). We’d hate to think that you’re relying on Brian Giles and that .191 BA to save your season. Venable has also managed to contribute three thefts thus far in 2009 and as recently as 2007 at Double-A San Antonio he stole 21 bases. He is a solid addition in NL-only formats and deeper mixed leagues.

Trevor Crowe, OF, Cleveland Indians: The 25-year-old has moved into the slot vacated by the trade of Ben Francisco to the Phillies. Crowe brings great contact rates and a solid batting average along with stolen base potential to the Indian lineup. Since being recalled, he’s now managed three thefts in eight games. Crowe did swipe 14 at Triple-A Columbus so expect more of the same with him hitting at the bottom of the order for the Tribe. Eventually Grady Sizemore will move into the three slot in the Indian batting order, won’t he? In Crowe, we could be looking at a potential lead-off bat down the road, making him a solid addition in both keeper and Al-only formats.

Jeremy Sowers, SP, Cleveland Indians: The 26-year-old southpaw was recalled July 25 and has now completed a run of three very solid outings in which he’s only allowed a total of only four earned runs in 20 IP. Has he finally turned the corner and will now show off some of that consistent potential that he demonstrated in his fine 2006 rookie season or is this just more of the same that we’ve witnessed in brief spurts over the past several years? The kid’s on a roll right now and worthy of your attention in AL-only leagues and he should be on the radar in mixed formats pending the outcome of his next several starts.

Ryan Roberts, 2B/3B, Arizona Diamondbacks: The former Jay was called up to replace Felipe Lopez who was traded to the Brewers July 19. Roberts, 28, was drafted 530th overall in the 2003 amateur entry draft and has the distinction of hitting a homer in his first major league at bat. He now has hit five long balls since replacing Lopez at second base with four coming against the Pirates, and one against the Phillies. Roberts is a solid option in NL-only leagues and in mixed leagues when playing against teams from Pennsylvania. Just when exactly are they planning to add a major league team in Scranton?

Carl Pavano, SP, Minnesota Twins: The Twins traded for Pavano last week in an attempt to help stabilize a rotation still reeling from the loss of Kevin Slowey for the balance of the 2009 campaign. Pavano has had a roller coaster season, but enjoyed a great debut for the Twins Saturday, tossing seven scoreless innings of five-hit ball with five strikeouts. Glen Perkins, Nick Blackburn, Anthony Swarzak and “ace” Francisco Liriano are all struggling as of late, so Pavano has to be at least some help in that rotation down the stretch. He is a solid addition in AL-only leagues at this time and should be kept on the radar in deeper mixed formats.

Trent Oeltjen, OF, Arizona Diamondbacks: Arizona must be getting close to exhausting its supply of outfielders at all levels in the organization. Justin Upton is the latest casualty, hitting the DL this week with a right oblique strain. Oeltjen, 26, was recalled Thursday and had a great debut, smacking a homer and stealing two bases. Down on the farm at Triple-A Reno, he hit 10 homers with 61 RBI, a great .300 BA and chipped in with 19 thefts. Has Arizona finally run out of patience with Chris Young , he of the 94 strikeouts in 311 at bats and .193 BA? Oeltjen is a solid addition in NL-only leagues.

Tommy Everidge, 1B, Oakland Athletics: At Triple-A Sacramento, Everidge hit nine homers with 32 RBI and a staggering .382 BA. His OPS was 1068. Everidge is not your typical A’s bat in that he’s not a walk factory, but it’s hard not to like that power potential. In his past 10 games, he’s hitting .343 with one homer, five RBI, and seven runs scored. On Friday, the Athletics released Jason Giambi, and Daric Barton is still at least a week away from returning from the strained hamstring injury, making Everidge a solid option in AL-only and H2H formats for at least the next week.

David Murphy, OF, Texas Rangers: The ankle injury to Nelson Cruz will guarantee more at bats.

Junichi Tazawa, SP, Boston Red Sox: Have I mentioned before that I really like this kid?

Chris Coghlan, OF, Florida Marlins: He has seven consecutive multi-hit games hitting in the lead-off role for the Marlins and is owned in only 12 per cent of CBS leagues.

Jake Fox, 3B, Chicago Cubs: Aramis Ramirez is reporting shoulder pain issues. Fox could be looking at full-time at bats at third base.

By Tim McLeod
This entry was posted on Sunday, August 9th, 2009 at 9:50 am and is filed under BASEBALL, The Wire Troll, Tim McLeod. You can follow any responses to this entry through the RSS 2.0 feed. You can skip to the end and leave a response. Pinging is currently not allowed.