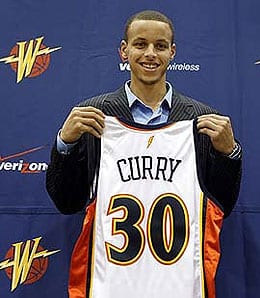 We’ve got more of the 2009-10 RotoRob NBA Draft Kit today as we keep rolling out the team previews. We’re almost a quarter of the way through, plus we’ll have tons of other goodies (cheat sheets, sleepers, busts, rookies, etc.) to follow. So while you’re wondering if one month of rehab was enough to straighten out Michael Beasley, let’s check in on the Golden State Warriors, who are so bad that their captain wants out.

The Golden State Warriors made the quantum leap from mediocre to awful last season, winning just 29 games and missing the playoffs for the second straight year. As usual, though, coach Don Nelson’s squad was an entertaining bunch to watch – provided you like his teams’  wide-open, keep the ball in the air, defense be damned, if they score two, we’ll score three style of play.

Nelson has won more NBA games than anyone not named Lenny Wilkens, but his incessant (and occasionally mind-boggling) fidgeting with his team’s lineup last season may have done more harm than good. Remember, the Warriors won a respectable 48 games in 2007-08, while leading the league in points scored and three-point attempts. Golden State slipped in both of those categories last season – and given the team’s lack of defensive acumen it was enough to sound the death knell for whatever playoff hopes it may have harboured.

The Warriors enter the ’09-10 campaign with more questions than answers: discontented stars, untested rookies and injury risks pepper this team’s roster. Nelson’s teams may be fun to watch, but if the Warriors are slow out of the gate this season, the legendary coach’s job may fall into jeopardy. In all likelihood, the Warriors probably won’t win a lot of games this season, and time may be running out for Golden State fans to watch that hardwood tilt-a-whirl known to many as simply “Nellie Ball.”

As mentioned earlier, Nelson is notorious for tinkering with his lineup – sometimes for no apparent reason – so take the Warriors’ starting five with a grain of salt. Starters sometimes receive back-up minutes and vice versa. Just when you think you have it all figured out, Nellie pulls a guy from deep in his rotation and makes him the offensive focal point before sending him back to the end of the bench three games later, then using him anywhere from zero to 31 minutes over the next two months. (see “Morrow, Anthony” for more).

Under no circumstances should you try to figure out what Nellie is thinking, or what he might do next…else you might join the legions driven to near-madness by the unpredictable nature of his whims. Don’t try to think – just roll with it and adjust your Fantasy lineup as Nelson’s mood dictates. Azubuike and Jackson are probably the safest options for minutes in Nellie’s kaleidoscopic lineup formula.

Point guard has been a problem for the Warriors since Baron Davis departed following the ’07-08 season, so all eyes will be on top draft pick Curry as he tries to fill B-Diddy’s big shoes. Curry will battle Acie Law and C.J. Watson for the starting nod, but Curry’s scoring ability – he averaged 28.6 points and 5.6 dimes per game at Davidson last season – would appear to give him the edge. One-time point guard of the future (he couldn’t get the “passing” thing down) Ellis is a fallback option, but he’s more of a two-guard than a point guy. He’ll rotate over to the two-guard spot to replace the departed Jamal Crawford should Curry prove capable of running the offense.

Maggette is a talented offensive player, but at only 6-foot-6 and 225 pounds, he lacks the physical presence necessary to match up with some of the NBA’s bruising power forwards. Last year’s top draft pick, Randolph, though, flashed some solid defensive skills (as well as a nice scoring touch) late in the season – and the 6’10” youngster could challenge Maggette for minutes at the four. Also lurking is super-sub Azubuike, but his stellar three-point eye (he shot a ridiculous 44.8 per cent from downtown in ’08-09) and 6’5″ frame make him a poor choice for duty beneath the basket. Brandan Wright showed flashes of ability last year, but he’s a long shot to earn meaningful minutes.

If Randolph indeed emerges, the resulting logjam of swingmen vying for time off the bench could give Fantasy owners fits – especially since Azubuike, Maggette and guard/forward Morrow should all be Fantasy-relevant at some point this season. Any of this trio could put up strong numbers on any given night, but trying to guess which one will get the run is the kind of thing that inspires Nellie-hate across the Fantasy landscape.

If you can stomach his mediocre FG percentage and occasional wackiness/suspensions, there’s a lot to like about Jackson. Captain Jack averaged over 39 minutes and 20 points per game for the second straight season last year, while posting career highs in assists (6.5) and rebounds (5.1), along with 1.5 steals per game. The usually durable Jackson battled injury woes last season, but when he was out there, he showed the ability to fill up a box score in a hurry. He has also shown the ability to get himself into trouble with his mouth, and he is on record as saying he wants to be traded. Keep track of this situation, but know that Jackson figures to be a Fantasy asset wherever he hangs his hat this year.

Ellis has a nice shooting touch, but he doesn’t venture beyond the arc very often, attempting only 1.3 treys per game in his career. That may be a good thing, as he is only a 28.7 per cent career shooter from downtown. If Ellis moves back to the two-guard spot, his lack of a deep ball puts a huge dent in his Fantasy value. Stay tuned, though, as he would project to be the first option if Curry can’t win the starting point guard job. Ellis as a point is a much more viable Fantasy option than Ellis as a shooting guard.

Randolph is on just about everyone’s sleeper list this year, and his post All-Star line a season ago (10.7 points, 7.9 boards, 0.9 steals and 1.5 blocks in just 24 minutes per game) should tell you why. He’s athletic enough to run the floor with any power forward in the league, and could become a frontcourt monster if he adds some muscle to his willowy 6’10”, 210-pound frame.

It’s all about Curry and his ability to learn the pro game – whilst avoiding Nelson’s aversion to giving rookies hefty minutes. Curry averaged 5.6 assists per game for Davidson last season, and his polished game should convince even Nellie to give him some serious run.

Randolph’s progress is a must-follow story, but also keep an eye on Jackson’s situation; if Captain Jack is traded the entire landscape changes in Golden State. Azubuike would figure to benefit the most from Jackson’s exodus – depending, of course, on whom the Warriors land in the deal.

By Buck Davidson
This entry was posted on Monday, September 21st, 2009 at 2:34 pm and is filed under 2009-10 RotoRob NBA Draft Kit, BASKETBALL, Buck Davidson, Team report. You can follow any responses to this entry through the RSS 2.0 feed. You can leave a response, or trackback from your own site.