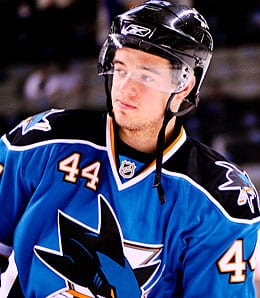 Sleeper alert: Marc-Edouard Vlasic is stepping up his offensive game.

We’re back with more of the 2009-10 RotoRob NHL Draft Kit. While Hawk fans cringe over an injury to super soph Kris Versteeg, why not check out our sleeper picks?

What constitutes a sleeper pick? It really depends on what you need. Maybe you just need a goalie who will get regular starts or maybe you’re looking for a 35-point defenseman to round out your roster. This list is an amalgamation of risk/reward: guys returning from injury, looking to take the next step forward, or maybe just poised to rebound from a bad year.

1. Derick Brassard, C, Columbus Blue Jackets: Brassard had just 25 points last year as a rookie. Of course, that was in just 31 games, so there’s hope that this former first rounder will keep pace as he looks to complete his first NHL campaign. Brassard will centre Rick Nash, meaning that he’s got every opportunity to succeed. Nash is a lock for 35-45 goals, and if the chemistry returns between Nash and Brassard, Nash could top 50 goals and Brassard could hit 70+ points.

2. Marc-Edouard Vlasic, D, San Jose Sharks: Dan Boyle is still the key defenseman on the Sharks, and Rob Blake is their other power play specialist. However, Vlasic’s role has increased with each season, and now it looks like San Jose will be giving him a greater power play role with Christian Ehrhoff shipped off to Vancouver. One key factor to look at: Vlasic’s shots on goal have increased with each season, from 66 to 72 to 104. His increased willingness to shoot the puck (no doubt influenced by Blake) shows an increasing offensive aggressiveness in his game.

3. Justin Williams, RW, Los Angeles Kings: When he’s been healthy, Williams has potential for 70+ points. In the only two full NHL seasons he’s played (for Carolina in ’05-06 and ’06-07), Williams put up 76 points and 67 points, respectively, both times eclipsing 30 goals. Since then, it’s been a pretty ugly stretch of seasons with less than 45 games. He didn’t do particularly well in his first dozen games in Los Angeles, but there is plenty of opportunity for Williams to play with some talented forwards in Anze Kopitar and Alexander Frolov. If Williams is healthy, he could be a major part of the Kings finally taking a big step forward.

4. T.J. Oshie, C, St. Louis Blues: Oshie gave Blue fans a tantalizing glimpse of the future last season with 39 points in just 57 games as a rookie. What was even more impressive was that coach Andy Murray felt comfortable enough putting the first-year NHLer on the penalty kill, where he wound up with four short-handed points. Oshie is looking to have a stellar second year, and while he’ll most certainly hit some bumps in the road, 60 points seems like a safe starting point.

5. Kyle Okposo, RW, New York Islanders: Assuming he doesn’t have trouble recovering from his Dion Phaneuf-induced concussion, Okposo should be able to build on a successful rookie campaign (18 goals, 21 assists in 65 games). In fact, he’ll have to in order for the Islanders to have any real success. The team’s fortunes are now in the hands of its young players (and Rick DiPietro’s hip). At the end of last season, Okposo was getting around 19 minutes of ice time every night, so you know that his coaches have faith in him. It’s really up to him to make the most of that ice time.

6. Zach Bogosian, D, Atlanta Thrashers: Defensemen tend to take longer to break in than forwards. For Bogosian, it took him a dozen games before he registered his first NHL point. After that, he put up 17 points in 35 games, including nine goals and a +11 on a disappointing Thrasher squad. Bogosian will be looking to take a big step forward with 40-point potential, but beware of the sophomore slump, especially for blueliners. There is a reason why Atlanta picked Bogosian third overall, but the reality is that most defensemen don’t really arrive until their fourth or fifth season.

7. Maxim Afinogenov, RW, Atlanta Thrashers: Injuries slowed down Afinogenov from his high-flying Sabre days, but the speedy Russian claims to be healthy and up for the challenge in Atlanta. As it stands, he won’t be playing on a line with Ilya Kovalchuk outside of the power play; his centre will be former Sabre teammate Slava Kozlov. Still, Afinogenov’s upside is huge — he’s only two seasons removed from a point-per-game year, though injuries remain a concern. Just hitting 30 years old, he has a few good years left in him if his head and heart are on it — as long as his body holds up.

8. Marco Sturm, LW, Boston Bruins: Who will make up for Phil Kessel’s 36 goals in Boston? GM Peter Chiarelli noted that Sturm — an effective two-way forward capable of 25+ goals — missed the bulk of last season. He’s healthy and motivated, and with the Bruins back in prominence after years of disarray, the entire team will be trending upwards. Sturm will alternate between first and second line duties, but he’ll also get time on both special teams.

9. Petr Sykora, RW, Minnesota Wild: This is the New NHL, where 25 goals doesn’t get you what it used to. Sykora can still score, and the Minnesota Wild need scoring, so it seems like a logical fit. New coach Todd Richards will give Sykora every chance to succeed, and while Sykora isn’t exactly the fleetest of foot, he obviously knows how to bulge the twine. He won’t put up a ton of assists, but given the right opportunity, another 25 goals seems totally feasible.

10. Chris Higgins, LW, New York Rangers: Higgins has played more than 60 games in three of his NHL seasons; in each of those years, he eclipsed the 20-goal mark. Now he’s a New York Ranger, a team desperately in need of an offensive spark. Coach John Tortorella loves his up-tempo style of hockey, so Higgins will be allowed to think offense first. Twenty goals seems par for the course, but given the right situation, 30 goals seems possible.

By Mike Chen
This entry was posted on Monday, September 21st, 2009 at 10:00 am and is filed under 2009-10 RotoRob NHL Draft Kit, HOCKEY, Mike Chen, Sleepers. You can follow any responses to this entry through the RSS 2.0 feed. You can skip to the end and leave a response. Pinging is currently not allowed.