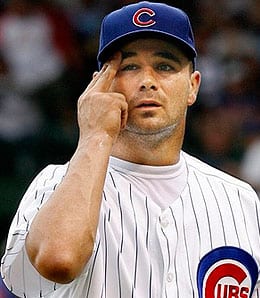 Ted Lilly should soon be back to help the Cubs end their slide.

This past week and change has been pure misery for the Cubs, who have lost six of seven while the Cardinals are surging. Suddenly, Chicago – looking to avoid a sweep against the Phillies Thursday afternoon – finds itself four games back of St. Louis, with the third-place Astros just three games back.

Injuries have played a role in the Cubs’ collapse, as starters Ted Lilly and Carlos Zambrano are both on the DL as is fourth outfielder Reed Johnson. Aramis Ramirez is essentially playing with one shoulder.

Speaking of Johnson, out since July 30 with a broken foot, he won’t be back as soon as expected as his injury has been healing slowly. In fact, it could be another two weeks before he returns, so Kosuke Fukudome will continue to benefit with extra at bats. Johnson was really scuffling in July before he got hurt, batting just .200 with a 529 OPS, so there’s really no reason to own him. His overall numbers are way down, a bit of a surprise as we expected Johnson to get plenty of action this season with the injury-prone Milton Bradley coming to Wrigley.

In the infield, second base has been a black hole all season long. Mike Fontenot –- someone we thought could do the job well enough — has not worked out, struggling all year after enjoying such a fine campaign in 2008. Aaron Miles has been even worse, and frankly, I suspect he has damaging photos of Lou Pinella that are allowing him to stay in the majors.

Bobby Scales was up earlier this season a couple of times as an injury replacement, but other than the fact that it made for a nice story to see a 31-year-old finally see some big league action, he’s not a real option. He’s hit well at Triple-A lately, but isn’t putting up the great numbers he did in the minors last season. More recently, new acquisition Jeff Baker has been doing a decent job, and he’s usurped Fontenot as the starter in the past few games. Go ahead and dump Fontenot in all but extremely deep NL-only leagues.

A potential solution I’ve been watching for some time is Nate Spears, whose overall numbers at Triple-A have been disappointing, but really he just got off to an awful start, improving every single month of the season. Spears could be the answer the Cubs are looking for at the keystone corner come 2010. Another darkhorse is Andres Blanco, who is currently on the DL, but showed a bit more gap power when summoned earlier this year after Miles got hurt. Once considered part of the future in KC, Blanco is rehabbing back at Triple-A (he was 3-for-5 with a double and a run Wednesday), and has proved he can hit Triple-A pitching. Will he get a bit more of a look down the stretch, especially if the Cubs continue to slip out of the race?

Rookie Jake Fox, recommended by Tim in his latest Wire Troll, continues to impress with three straight multi-hit games earlier this week. He’s driven in runs in his last three games, and while he’s cooled off since a big July showing, Fox’s productivity dictates that he’s worth a pickup in NL-only leagues.

Back-up catcher Koyie Hill has somewhat resurrected his career this season, but at the age of 30, it’s become clear he will never deliver on his once top prospect status. Not surprisingly, he barely saw the light of day in the majors last season, so the best thing we can say about him is that he’s set career highs in games and at bats this season. The dude has a solid glove and is a gamer, but who cares? In 150 career games, he’s barely managed to hit .200, so will clearly never be a Fantasy asset.

By RotoRob
This entry was posted on Thursday, August 13th, 2009 at 12:41 pm and is filed under BASEBALL, Fantasy Notes, RotoRob. You can follow any responses to this entry through the RSS 2.0 feed. You can leave a response, or trackback from your own site.