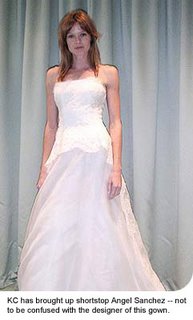 The Royals have lost 100 games for a third straight year and fourth time in five years. Yes, there are prospects on the way (Alex Gordon, Billy Butler, Justin Huber, Luke Hochevar) who are expected to help turn the franchise’s fortunes around.

Even their hardcore fans, like RotoRob Royals’ correspondent Craig Brown, are ready to commit murder, and the Simpsons even jumped on the Royal bashing bandwagon this week.

This season has obviously been a lost cause for some time, with just playing the spoiler left, a job the Royals seemed to have relished. So that leaves us to speculate on how the team may look next year.

For instance, who will be their starting shortstop?

Incumbent Angel Berroa’s career has essentially been in free-fall since his 2003 AL ROY season. He played just 130 games this year as he lost playing time to Andres Blanco, especially down the stretch. And why not? Berroa clearly had his worst season yet with the Royals.

KC GM Dayton Moore says he stills consider Berroa part of the long-term future, although there were trade rumours surrounding the 28-year-old shortstop when Moore was first hired earlier this year.

Of course, it behooves Moore to say that, especially considering “his guy” — Blanco — had to undergo surgery this week, a procedure expected to sideline him for six months, meaning he’ll be unavailable to start the season.

Not that Blanco is a great alternative, mind you. He has no power, no speed and does not get on base (.290 OBP). I don’t care how good your glove is; these days you’ve got to be able to hit to some extent, especially in a lineup like KC’s that requires contributions from everyone.

There is a third option, however — Angel Sanchez (not to be confused with wedding gown designer Angel Sanchez; clearly the Royals are more of the bridesmaids types anyways. Besides, I’ll leave discussions on that Sanchez to the RotoWidow in her Fantasy Fashion League updates).

Last week KC gave the shortstop Sanchez a nice 23rd birthday present by bringing him up to the big leagues. Now, this guy looks like he could actually be a decent top of the order kind of hitter, although he’s struggled in his brief action with the Royals so far. In his first season of Double-A ball this year, Sanchez scored 105 runs, his second straight year with over 100 runs.

Sanchez was the Royals’ 11th round pick in 2001, and while he doesn’t offer much pop (24 doubles, one triple, four homers in the hitter-friendly Texas League), he is developing more patience, drawing a career-high 44 walks this season. Now that may not seem like much, but compared to Berroa and Blanco — who wouldn’t recognize a strike if it bit them on the ass — Sanchez looks like a Billy Beane disciple.

He’s not a great baserunner (eight steals, nine times caught), so I’d like to see him improve his base-stealing skills before he is considered more of a true lead-off hitter type. But current KC lead-off man David DeJesus might profile better as two-hole hitter, or even as a third-place man if his power develops, so perhaps the Royals will be in need of a more prototypical top of the order stick.

Sanchez could fit that bill, so keep an eye out for this kid as a possible 2007 sleeper.

By RotoRob
This entry was posted on Saturday, September 30th, 2006 at 12:30 pm and is filed under BASEBALL, RotoRob, Team report. You can follow any responses to this entry through the RSS 2.0 feed. You can skip to the end and leave a response. Pinging is currently not allowed.