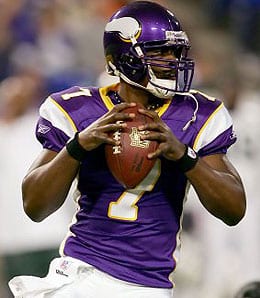 When we originally released our Minnesota Vikings Team Preview last week as part of the 2009 RotoRob NFL Draft Kit, it was written under the assumption that in 2009, Brett Favre would become the greatest purple-wearing creature since Barney.

Now that we know that all the off-season wooing will not result in a consummation of this proposed marriage, the football landscape has changed dramatically in Minny.

With this in mind, Herija has rewritten much of the Vikings’ Team Preview, so we thought we better draw our readers’ attention back to this for clarification now that the Favre fantasy is over.