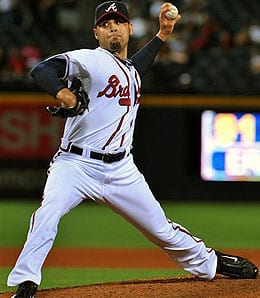 Chad Qualls just finished up a very good July in which he allowed only two earned runs and racked up six saves to solidify himself as the team’s closer. Monday night, he worked a perfect ninth to reach the 20-save mark for the first time. Jon Rauch turned in a fine July, also allowing only two earned runs in 11 appearances. The back end of the Arizona bullpen is looking mighty fine at this time.

Rafael Soriano wasn’t as automatic in July as he has been for most of the season (although he looked strong last week with a pair of saves). He gave up as many earned runs in July (five) as he had in the first three months of the season combined. Still, Soriano racked up 10 saves last month and his ERA is still a sparkling 1.84. Not too shabby considering his “off” month. Mike Gonzalez , formerly one of the NL’s top closers, has settled into a set-up role as the season has progressed. He’s number two in line and is worth a roster spot if you have one given Soriano’s injury history.

Don’t look now but Kevin Gregg has blown his last two save opportunities and is now dealing with a “tired arm” that will cause the team to rest him Tuesday. This comes on the heels of the Cubs bolstering their bullpen by acquiring John Grabow from the Pirates in a five-player deal at the deadline. I wouldn’t worry too much about Gregg’s recent struggles since (a) Lou Pinella is fiercely loyal, especially to his veterans; and (b) Pinella hates to be questioned and will be willing to keep a struggling veteran in a role he can no longer handle just to show the fans and the media that he can do whatever the hell he wants to do. So there. Meanwhile, Carlos Marmol continues to have a pretty ho hum season as he struggles with his control. While Gregg was licking his wounds from two straight beatings, Marmol got a save on Monday, but only after allowing two hits an and earned run. With Gregg and Marmol looking very unimpressive, Grabow may be a factor in the bullpen equation as the season progresses.

It’s too bad that Francisco Cordero’s great season is wasted on the lousy Reds. He has put up quality numbers all season long. It’s hard to believe that three years ago his career was at a crossroads with Texas where he pitched his way out of the closer’s job. This is now ancient history as he’s been excellent since then.

Matt Lindstrom is back, baby! Okay, so that didn’t require an exclamation point like it was the second coming of Dennis Eckersley or anything, but this could have great Fantasy repercussions. All indications are that Lindstrom will be eased back into the closer role as soon as he proves himself ready and he looked strong in his first outing, even if his fastball wasn’t as crisp as normal. Before his stint on the DL, Lindstrom wasn’t what you’d call a shutdown closer as his ERA was over six and a half and WHIP was over 1.8. Still, he had 14 saves. Leo Nunez took care of the bulk of the closer work while Lindstrom was out, and he’ll likely — along with Dan Meyer — continue to get some save chance while we wait for Lindstrom to reassert himself.

The Dodgers strengthened their bullpen and got some insurance against Jonathan Broxton’s toe injury when they made a deadline deal for the Orioles’ George Sherrill. Sherrill was having a fine season before getting traded, recording 20 saves with the Os. His value takes a huge hit moving to a set-up role but he could still be useful depending on how Broxton’s toe holds up. I would keep a close eye on Sherrill and stash him if you can.

While the big news last week focused on the Phillies’ pursuit of Roy Halladay and their landing of Cliff Lee, they failed to address their biggest need – closer. Brad Lidge’s nightmare of a season continues. Yes, he has 20 saves, but the reality of the situation is Lidge sucks this year. His ERA and WHIP numbers are embarrassing and you have to wonder how much longer the Phillies can continue to trot him out there and expect to repeat. Brett Myers (hip surgery) is on the comeback trail and could prove a threat to Lidge’s job if he’s sharp.

Speaking of nightmare seasons, Matt Capps certainly qualifies as he continues to scuffle. The only saving grace for his owners is that his competition for the job, Grabow, was traded to the Cubs. The lack of talent in Pittsburgh pretty much ensures that Capps will finish the season as closer, deserving or not.

Surprisingly, Heath Bell’s name came up in rumours as the trade deadline approached. It seems the cost cutting Padres are afraid of the kind of salary Bell could make in arbitration this offseason. Thankfully, he didn’t get dealt and should continue to be a shut-down closer. His salary, as it stands now, makes it highly unlikely that he would pass through waivers. I would be concerned about his status during the offseason, though. If you’re going for it this year, Bell’s a good one to have. If you’re looking to next, buyer beware.

Ryan Franklin proved to be mortal after all. After a spectacular first three months, Franklin’s ERA has crept above 1.00 as he took his first loss of the season on July 22. He’s come back with two saves since then. July was “rough” on Franklin as he has doubled his earned runs allowed from three to six (oh the horrors). Don’t panic, He’s been one of the best closers this year. His track record doesn’t show him to be this type of pitcher, but that’s why they call them career years. Enjoy the ride.

It looks like Jim Riggleman is going to go with Mike MacDougal as his closer. It’s not like he has really wonderful options, anyways. MacDougal has stabilized the National bullpen and given the team a somewhat reliable guy at the back end. Keep in mind that MacDougal is wild, gives up too many hits and has been known to totally implode. He’s probably one of the worst closer options out there, but pitching as few innings as he does he’s shouldn’t kill your ERA and WHIP too much, so go ahead at least add him in NL-only leagues.

By Todd Habiger
This entry was posted on Wednesday, August 5th, 2009 at 9:14 am and is filed under BASEBALL, Saving Grace, Todd Habiger. You can follow any responses to this entry through the RSS 2.0 feed. You can leave a response, or trackback from your own site.