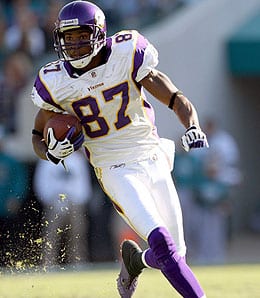 Bernard Berrian helped shore up the Vikings’ passing game in 2008.

We’re back with more of the 2009 RotoRob NFL Draft Kit with yet another team preview (woo hoo! — just four teams remain). We’re going to try to shoot out all these team previews and then start releasing the kit’s other goodies (cheat sheets, sleepers/busts lists, etc.). While we figure out if the Minnesota Vikings can build on last season’s division-winning performance, does anyone think that Roger Goodell showed some cracks in his hard-ass shell when he lifted Michael Vick’s ban?

The Vikings shook off a 1-3 start to finish 10-6 and capture their first NFC North banner, which included an impressive 7-2 mark over the season’s final nine weeks. Offensively, Adrian Peterson solidified his status as the NFL’s top back, rushing for 1,760 yards and 10 touchdowns, and free-agent addition Bernard Berrian brought some credibility to an otherwise shaky passing game. The trade for Jared Allen (14.5 sacks) paid immediate dividends, and he, along with Pat Williams and Kevin Williams, anchor perhaps the best defensive line in the business on a unit that finished first against the run in 2008.

Despite a nice run to reach the playoffs, the Vikings bowed out immediately, dropping a 26-14 decision to the sixth-seeded Eagles. The combination of Tarvaris Jackson and Gus Frerotte struck fear into the hearts of no one at the game’s most crucial position. Outside of Berrian, the Vikings boasted a collection of underwhelming pass catchers like Bobby Wade, Visanthe Shiancoe and the maddeningly frail Sidney Rice. Plus, head coach Brad Childress still has plenty of critics based on his game management and play-calling skills.

Minnesota’s offseason can best be summed up in two words: Brett Favre. The interminable dance between Childress and Favre monopolized headlines for months before ultimately ending with Favre remaining retired. Before all that happened, the Vikings did add Sage Rosenfels from Houston to replace Frerotte, though Rosenfels has made just 12 starts in eight NFL seasons. In terms of losses, veterans Matt Birk and Darren Sharper won’t be back. Even without Favre, the Vikings will still compete with Green Bay and Chicago for the division, but a deep playoff run might be unrealistic.

Despite being armed with just five selections, Minnesota drafted a pair of potential immediate contributors in receiver Percy Harvin and offensive lineman Phil Loadholt. Harvin’s draft stock was affected by durability concerns and off-field issues, but he may have been the best pure athlete in the draft. Look for the Vikings to line Harvin up all over the field to create mismatches.

There was a reason the Vikings devoted so much time and energy into trying to lure Favre out of retirement, and quite simply it’s because their current options are underwhelming at best. Jackson, who enters camp as the nominal starter, was benched after two games last year to go with the journeyman Frerotte. He got the starting job back in Week 15 and played decently over the final three weeks, but thus far in his career he’s been asked to simply not make too many mistakes — that’s not the kind of role you’re looking for in a Fantasy quarterback. Option B is Rosenfels, who started 10 games for the Texans over the past two years to mixed results. On the plus side, he’s fairly accurate (66.7 per cent completions in 2008) and can post solid numbers. However, the down side with Rosenfels is he turns the ball over too much, which is exactly what the Vikings don’t want from their quarterback. Of course, there’s also the yet to be determined fallout from Childress’ public fawning over Favre. Look for Jackson to get first crack at the starting job, but don’t expect Childress to hesitate to switch to Rosenfels if the team is underperforming. Jackson’s not worth drafting, though Rosenfels could be added as a No. 2 quarterback during the season if he becomes the starter.

Last season, the question was AD or LT with the No. 1 pick…this year, it’s all Peterson. The man is an absolute beast and can carry a Fantasy team on any given week. He’s run for 3,101 yards in his two NFL seasons, which includes an outstanding 16 games (out of 30) with better than 100 rushing yards. There are a few chinks in Peterson’s armor — fumbles, minimal involvement in the passing game and lingering durability concerns — but nothing to dissuade whoever owns the top pick in your draft from calling his name. His backup, Chester Taylor, is also a talented back. He amassed 798 total yards and six TDs in 2008 and is a must handcuff for all Peterson owners. If that owner is asleep at the wheel, Taylor makes a legitimate No. 4 Fantasy back as a standalone.

In his first season with the Vikings, Berrian’s receptions fell from 71 to 48, but his yardage actually increased slightly on the strength of his 20.1 yards-per-reception average (second among players with more than 15 receptions last year). While that makes Berrian a dangerous target in the NFL, it also makes him a frustrating week-to-week play in Fantasy leagues — consider that eight times last year he finished with fewer than 50 receiving yards (seven of those without a touchdown). Still, he’s the best the Vikings have to offer and is a solid No. 3 Fantasy receiver. Things get dicey after that with Wade, Harvin and Rice all jockeying for position. Wade (53-645-2 in ’08) is a solid possession receiver, but after six seasons in the league you know what you’re getting. He’s only an option in deep leagues. Rice has had trouble staying on the field in his young career, and even when he’s in the lineup it’s been a crapshoot. That makes him more of a watch list candidate. Harvin has tremendous physical gifts, but he’s far from polished as a receiver and the transition to the NFL is already a difficult one for wideouts. Still, he has great speed, which should help him turn short passes into long gains. He’s an intriguing late-round selection as a No. 5 Fantasy receiver; just don’t reach to acquire him earlier than that.

After five undistinguished campaigns, Shiancoe finally registered as a blip on Fantasy radars with his 42-596-7 line last season. While those are decent numbers, if you take away a Week 16 beat down of Atlanta, Shiancoe averaged 2.3 receptions, 30.7 yards and 0.33 touchdowns per game in his other 15 contests. He’s a solid reserve, but don’t draft him as a starter unless your league awards bonus points for players that expose their junk on network television.

Minnesota is the NFL’s best at stopping the run, which unfortunately doesn’t mean much in Fantasy circles. However, this D excels at rushing the passer (45 sacks in ’08) and always seems to score defensive touchdowns, which is Fantasy gold. Plus, the addition of Harvin immediately upgrades Minny’s return game. Draft the Vikings as a mid range No. 1 unit.

By Herija Green
Tags: Michael Vick, Minnesota Vikings, NFC North, NFL Draft Kit, Roger Goodell
This entry was posted on Tuesday, July 28th, 2009 at 12:46 pm and is filed under 2009 RotoRob NFL Draft Kit, FOOTBALL, Herija Green, Team report. You can follow any responses to this entry through the RSS 2.0 feed. Both comments and pings are currently closed.