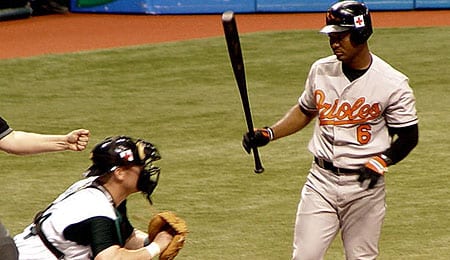 Melvin Mora is not alone among Oriole hitters suffering down seasons.

Brian Roberts snapped an 0-for-12 skid Thursday with an RBI double, but after a huge start to the season, he’s been fading in recent weeks. After hitting .356 with 19 runs in April, Roberts hit just .256 in May (but he did score 24 runs, drive in 15 and smack four homers). June has been much less productive so far, with a .241 BA, 631 OPS and just five runs and no home runs. He has swiped four bases this month, maintaining that aspect of his game, but Roberts hasn’t quite lived up to our pre-season billing as the fourth-best man at the keystone corner. There’s no doubting the fact that Roberts is a solid veteran player, and his durability over the last three seasons has been admirable. The fact that his power is up slightly this season is also a good sign, but let’s face it: at the age of 31, Roberts is on the downward trajectory of his career. This doesn’t worry me as much as it used to when second baseman tended to flame out very quickly, but you can see that his numbers – both offensively and defensively (where his range has slipped after a couple of strong seasons) – are trending downward, and if not for that massive start, Roberts would be a massive disappointment. I might wait for him to heat up a bit, and then start listening to trade offers.

Another Oriole who’s been trending downward lately is Adam Jones. He’s enjoying a very fine season, but he’s hit the rails recently with a 3-for-32 skid. Jones has dealt with some minor injury woes this season, but he absolutely burst out of the gates with 24 runs, four homers, a .359 BA and an OPS of 1061 in April. May was slightly less spectacular, but still pretty damn impressive with 16 runs and a 959 OPS despite 24 strikeouts. So far in June, however, Jones is scuffling with just six runs, one homer, six RBI and a .204 BA. This 23-year-old kid has plenty of upside – I see him becoming a better player than Torii Hunter in time – and he’s shown plenty of reason for optimism this season. In fact, once all is said and done, I could see Jones cranking 25 dingers and stealing 15 bases or more this season, all the while maintaining a strong average (but probably not as strong as it currently is). Jones has shown an improved batting eye this year, but he still has a long way to go with that aspect of his game.

Nick Markakis has also been unable to build on his big start – are we sensing a trend here yet? He looked to be shaking off a lethargic June with a career-high tying four-hit night on Wednesday and then he comes right back and takes an 0-for-5 with three punchouts Thursday night. Markakis was unstoppable in April, batting .381 with an OPS of 1020, but those numbers slipped to .240/719 in May despite 15 runs and five homers. He’s rebounded somewhat with a .276 mark in June, but has a paltry five runs and just one jack so far this month. Overall, Markakis’ numbers aren’t hugely out of line from what he did last season, but the big difference has been the walks. He’s not drawing free passes anywhere near the rate he did in 2008, and that’s lopped 50 points on OBP from his numbers, taking his OPS tumbling down to 820 after he flirted with a 900 season last year. If you can talk that up and get him somewhat cheap, now is the time to do it. Markakis is a fantastic young player and given that his OPS has been 114 points higher in the second half over the last three seasons, I have no doubt that he’s going to be over 900 by season’s end, making him a strong buy-low candidate.

The parade of disappointing Oriole hitters continues with Aubrey Huff who, not surprisingly, has been unable to build on his huge 2008 season. He’s had a rough year, but had especially been scuffling in June, with just one homer and a 686 OPS. However, Huff came through big time on Thursday night, going 3-for-5 with a run, double and the game-winning RBI off Francisco Rodriguez to help the O’s rally past the Mets. Huff has now hit in six straight games, giving some hope to owners who have to be upset that they spent a seventh round pick on him. He’s actually wound up on a few waiver wires recently, so take a peak to see if he’s available. Huff’s extra-base hits are way down, yet somehow he’s on pace for a career best in RBI. He’s also improved his strikeout rate, yet is not getting on base like he has in recent seasons. From B-More’s perspective, it’s probably bad enough that Huff is hurting his trade value by having an off year, but what the hell is the deal with his futile attempts to steal bases? The dude is 0-for-5 on the basepaths this season. Hey, Aubrey: this is not part of your game. Cease and desist this activity immediately.

To wrap up this segment on struggling Oriole hitters, Melvin Mora is turning things around a bit. Thursday, he extended his hit streak to seven games by feasting (2-for-4) against one of his favourite pitchers to batter (Livan Hernandez, who Mora was hitting a career .308 against before Thursday’s action). Mora actually had a big April, although an injury limited him to just a few games of action. He slumped in May and had been scuffling even worse in June until the past week or so. The truly scary aspect of Mora’s season has been his complete inability to hit with any pop – his extra-base power has never looked more pathetic. He’s drawing more walks, but overall is enduring his worst season since he was a rookie with the Mets. After Mora’s big comeback season in 2008, we ranked him as a top 20 third baseman, however, we did caution at the time that he could easily drop like a stone. And he has, barely playing to top 40 status at this point. Like I said, he’s heating up a bit, and that’s worth monitoring, but right now he’s a borderline Fantasy option in mixed leagues.

By RotoRob
This entry was posted on Friday, June 19th, 2009 at 2:16 pm and is filed under BASEBALL, Fantasy Notes, RotoRob. You can follow any responses to this entry through the RSS 2.0 feed. You can skip to the end and leave a response. Pinging is currently not allowed.