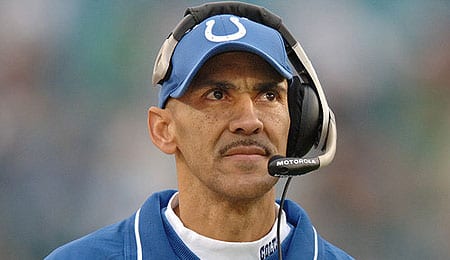 How will the Indianapolis Colts fare in the post-Tony Dungy era?

We’re back with more of the 2009 RotoRob NFL Draft Kit today with another team preview. We’re going to try to shoot out all these team previews and then start releasing the kit’s other goodies (cheat sheets, sleepers/busts lists, etc.). While you consider the fact that Ryan Leaf is no better a criminal than he was a quarterback, why not read up on whether the Indianapolis Colts can get back atop the AFC South?

Outside of Peyton Manning’s usual 4,000-yard passing season and having the good fortune of beating a slew of awful quarterbacks, the most notable success in Indianapolis came off the field in 2008 when Men’s Health Magazine named it as the country’s most sexually active city. Bet you didn’t have that one in the office pool. Nonetheless, it was that kind of year in Indy. Inconsistency ruled the day.

Despite finishing 12-4 in Tony Dungy’s last season as head coach, it is not the best sign for your defense’s long-term future that you gave up 328 all-purpose yards, third most in a post-season game, to a 5’6″ back-up running back. Chargers’ mighty-mite Darren Sproles exploited an Indy defense that failed time after time to seize control of the game in a Wild Card round loss. However, this was an ongoing theme throughout the year as Indy’s defense finished 24th against the run. Yet, what else is new? Speaking of running, the Colts didn’t do much. Just ask 2006 first round pick Joseph Addai. While the team dealt with numerous injuries on offense including Marvin Harrison, centre Jeff Saturday and Manning prior to season’s start, the failure of the running game proved to be a constant nag. Addai averaged just 3.5 yards per carry and scored a paltry five times on the ground.

Much of the offseason has been spent focusing on coaching matters and not personnel (the Colts signed only one free agent — linebacker Adam Seward). Dungy retired, which paved the way for former defensive coordinator Jim Caldwell to take over the top spot. Longtime offensive coordinator Tom Moore and offensive line coach Howard Mudd left and will be replaced by Clyde Christensen and Pete Metzelaars, respectively. Larry Coyer became the defensive coordinator, replacing Ron Meeks. Meanwhile, new special teams coach Ray Rychleski and I have something in common: neither of us has coached special teams in the NFL before.

As Addai continues to head towards bust status, the Colts addressed their woeful running game by selecting UConn’s Donald Brown in the first round. They devoted the second and third round to defense by taking defensive tackle Fili Moala and cornerback Jerraud Powers, both of whom should provide the D with much needed depth. Fourth round picks receiver Austin Collie and defensive tackle Terrance Taylor offer up much of the same. Collie is most likely to see more time as a gunner on special teams than catching passes from Manning.

Speaking of the Golden One, Manning starts his 12th season, but is in for some change. Not only will he have a new offensive coordinator for the first time in his career, but he will not he having his spirals hauled in by Harrison. Manning may stumble out of the gates early on in 2009, but once the Colts sort through their chemistry issues, he should be close to that 4,000-yard plateau again (he has thrown for fewer than 4,000 yards only twice in his career). While his interceptions may go up because his receiving corps isn’t as loaded as in years past, he is likely to rank among Fantasy’s best at quarterback. Oh, almost forgot. America’s cushiest job is still held by Jim Sorgi. If you’re reading more about Sorgi in 2009, that is bad news.

The arrival of Donald Brown may serve as a wake up call to Addai, who has not produced to the level expected and seems to possess questionable stamina. As NFL Network’s Jamie Dukes pointed out during draft coverage, is there a player in the league who taps his helmet to come out of games more than Addai? He must become more durable or Brown may turn into his permanent replacement. At season’s open, look for Addai to start, but opposing defenses will receive increasing servings of Brown as the year wears on.

Reggie Wayne leads the Harrison-less group. He’ll try to rebound after posting his lowest totals since 2005, but it will be third year wideout Anthony Gonzalez who may have the biggest say in the success of the Colt passing game. With Harrison out, Gonzalez must provide some sort of compliment to Wayne on the outside and improve on his 2008 campaign of 57 receptions. While tight end Dallas Clark can create nightmares for linebackers in coverage, Gonzalez will need to stretch the defense and also take pressure off Wayne. Former Mount Union standout Pierre Garcon could be in line for the number three wide receiver spot, which is another area where the Colts will need some productivity. This is a long way from the heyday of Harrison, Wayne, Brandon Stokley and Clark.

The biggest question yearly for Clark is whether he can stay healthy. Last season, he only missed one game and was a tough cover again. He posted career highs in receptions and yards and ostensibly became Manning’s number two option. Clark better stay on the field in 2009 — Indy’s depth at tight end with names like Tom Santi and Jacob Tamme leaves a little to be desired.

Another year and another porous run defense for the Colts; they finished 24th against the run but did show improvement against the pass. Despite suffering injuries to cornerbacks Marlin Jackson and Kelvin Hayden and the annual Bob Sanders’ ailment, the Colts allowed a league best six passing touchdowns in ’08. The Fantasy value of this group is likely to define mediocrity again though. Thanks to their one trick pony defensive line featuring end Dwight Freeney and the feast or famine secondary, the Colts don’t make enough big plays to warrant top consideration as a Fantasy defense. As for their special teams, I’ll ignore them as their front office often does.