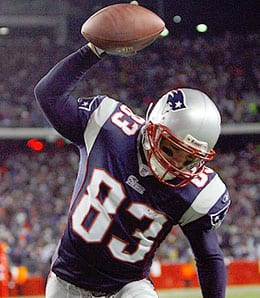 Wes Welker should be a top 15 wide receiver this season.

We continue the 2009 RotoRob NFL Draft Kit today with another team preview. We’re going to try to shoot out all these team previews and then start releasing the kit’s other goodies (cheat sheets, sleepers/busts lists, etc.). While you wait around for Roger Goodell to give Donte’ Stallworth another rap on the knuckles, why not read up on the Pats, who are seeking to return to the top of the NFL?

The 2008 New England Patriots finished the season with an 11-5 record, but failed to make the playoffs in the brutally competitive AFC. While some may deem last season a failure, Pats’ fans enjoyed the emergence of Matt Cassel as a legit NFL quarterback. The team played well, especially down the stretch, when they won five of their last six games. Fantasy-wise, in addition to Cassel putting up decent numbers, wide receivers Wes Welker and Randy Moss had solid years and their defense had some good games. Sadly for New Englanders, the Miami Dolphins won the division on a tiebreaker, and Cassel & Co. joined the injured Tom Brady at home for the playoffs.

There was pretty much only one thing that went wrong for the Patriots in 2008, and that was the injury to all-world quarterback Brady. While the injured knee forced him into an unenviable life of frolicking around New York with girlfriend Gisele Bundchen, the Patriots were forced to move on with their backup, Cassel. Patriot fans were also alarmed at reports of botched surgeries and infections that could force Brady to miss the 2009 season as well. All of that was put to rest when he started working out and now seems ready for the fall. In addition to Brady-related problems, Coach Bill Belichick constantly left Fantasy owners wondering which running back would get action and carries in any given game. The result was a backfield of mediocre fill-in type Fantasy running backs.

The offseason for the Patriots was fairy active this year as Offensive Coordinator Josh McDaniels left to take the head coaching job for the Broncos. He took with him wide receiver Jabar Gaffney and running back LaMont Jordan, but they were never huge factors in New England. This spring, Ellis Hobbs, Mike Vrabel, and Cassel were all sent packing for draft picks. Although the Patriots lost a fair amount, they have a plethora of new arrivals which include RB Fred Taylor, WR Joey Galloway, WR Greg Lewis, TE Alex Smith and CB Shawn Springs.  Taylor figures to share time with the rest of the horses in the stable. Galloway is slotted to be the third wide receiver, which could evolve into a nice year with most of the defensive attention being focused on Moss and Welker.

While the Patriots forfeited their first-round pick due to spygate, they had picks stockpiled — including four second-round selections this year. They took Oregon S Patrick Chung, Boston College DT Ron Brace, Conneticut CB Darius Butler and Houston OT Sebastian Vollmer. The first three selections addressed an aging defensive unit that could use some fresh legs. Third round pick, North Carolina WR Brandon Tate, will give Brady another weapon to play with. All in all, this marked another solid draft in which the Pats also picked up some assets for next year.

All you need to know is that Brady is back and ready to resume his Hall of Fame career. So far he has looked great, but the Patriots could be in big trouble if the golden boy is hurt again this year as his backups are Matt Gutierrez and Kevin O’Connell. If all goes well, I would expect Brady to finish with over 4,000 yards and 30 touchdown passes. As far as quarterbacks go, it is safe to rank him in your top three going into draft day.

For those of you who had Laurence Maroney last year, you know the frustration associated with owning any running back on this squad. The Patriots like to mix it up and spread their carries around, making it impossible to predict who will get the bulk of the work. This year, New England introduces Taylor into the fold, and he seems to be the likely candidate to be the official starter. Carries will be divided between Sammy Morris, Taylor, and Maroney, with Kevin Faulk seeing a lot of work on third downs. None of the Pat backs should be ranked in the top 35 Fantasy running backs, so unless you are in a deep league, you will not be looking at any of these names in the early rounds.

While it is difficult to project running backs on the Pats, it is always evident who their aerial targets will be. Galloway joins Moss and Welker to create a formidable group of experienced wide receivers. I would look for Moss and Welker to have amazing years with Galloway putting up some big games as well. I think Moss is a top five wide out and Welker is in the top 15. Galloway should be worth a late-round flier, especially in deep leagues.

While the tight ends are not as impressive as the wide outs on this squad, they are serviceable. Benjamin Watson figures to get the most playing time followed by a group that includes Smith, Chris Baker (the touchdown maker!), and David Thomas (the muffin maker?).

The New England Patriots finished in the lower third of the Fantasy defensive rankings last year, much to the surprise of many. The unit only generated one defensive touchdown. This year’s unit will be younger and possibly more talented, but the Pat offense scores so fast sometimes that the defensive is always on the field. Although I love Jerod Mayo, Adalius Thomas, and Richard Seymour as players, I would not consider drafting the Patriots until at least half the defenses are off the board.

By Alex Hardin
This entry was posted on Thursday, June 18th, 2009 at 11:28 am and is filed under 2009 RotoRob NFL Draft Kit, Alex Hardin, FOOTBALL, Team report. You can follow any responses to this entry through the RSS 2.0 feed. Responses are currently closed, but you can trackback from your own site.