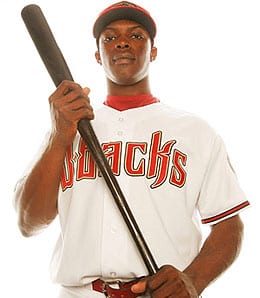 Who would have expected Justin Upton to be outhitting his older brother so far?

In case you hadn’t noticed, B.J. Upton has finally awoken from his season-long slumber. He’s now hit safely in seven straight, including back-to-back multi-hit games with a stolen base in each one. On Wednesday, Upton came through with a two-run double to help spark Tampa Bay’s rout over the Royals, and get this – it marked his first multi-RBI game of the season. Upton started the season on the DL, and has been very slow to get going, striking out way too often, walking less frequently and suffering from a lack of power. It’s not exactly what you expected from a dude we had ranked as the ninth-best outfielder in the game, is it? Well, younger brother Justin has been that good, but B.J.? He hasn’t even been a top 50 flyhawk through the first two months of the season. But it looks like that’s all changing now, so hopefully you bought low on the elder Upton.

The Rays got more good news Wednesday, when it was reported that Evan Longoria will likely avoid a DL stint for the sore left hamstring he suffered Tuesday. He’s considered day-to-day. The reigning AL ROY had already been dealing with an elbow problem that had limited him to DH duties in the preview two games, and then he was out Wednesday because of the hammy. Longoria had gone just 1-for-10 in his past three, but these health woes have been the only thing to slow him down so far. He had a huge April and was pretty darned good in May, too. Longoria’s overall development at the plate has been very impressive indeed: the power is incredible; he’s been extremely productive; he’s been more patient and has cut his Ks, as well. No wonder he made our early-season All-Star Fantasy team.

Another member of that All-Star team was Carlos Pena, and while he’s slowed down somewhat since his torrid start, he continues to put up the power numbers, leading the AL in both home runs and walks. Pena is currently mired in a 3-for-25 slump, although he did get the party started Wednesday night with an RBI double as the Rays thrashed the Royals 9-0. He’s now on pace for his first ever 30-double season. Oh, by the way, Pena is also headed towards his first 50-homer season. Look for him to shake off whatever slump he’s in Thursday with Gil Meche taking the hill for KC. Pena has owned Meche over the years, hitting .320 in 25 career at bats against him.

With Longoria out of action Wednesday, Willy Aybar of all people took his spot at third base and in the three-hole in the batting order. Aybar came into the game in a 1-for-13 skid, but went 1-for-3 with a run and two walks. He was awful in April, but enjoyed a nice May, batting .306 with a 900 OPS. Overall, Aybar’s strike zone judgment has bounced back and it’s helped his BA rebound somewhat. We recommended him back in August when he heated up, and it might be time to put Aybar back on your radar now that Akinori Iwamura is out for the season and Tampa Bay is dealing with other injuries.

We hope you took our advice on the weekend and scooped up Ben Zobrist, because he’s now one of the hottest acquisitions in the game, and given that he’s gone yard in the past two games – including a grand slam Wednesday to help the Rays win their fourth game in 10 tries – his popularity won’t be waning any time soon. Zobrist, who enjoyed an excellent April (1004 OPS), was even better in May (1064), and with his current nine-game hitting streak and exploits this week, apparently he isn’t slowing down. Can you believe this dude has already gone yard 10 times this season? And how about that patience? He’s matched his career high with 25 walks and we’re in the first week of June. Yes, Zobrist took a nice step forward last season, but who the hell saw this coming?

Veteran minor leaguer Joe Dillon homered and singled for the Rays on Saturday, but those are the only hits he’s had since his recall on May 26. Even with all the injuries the Rays have now, there’s no reason to give Dillon any consideration regardless of the size of your league.

Gabe Gross, who has been slumping lately (2-for-16) woke up Wednesday with a 2-for-4, one-run performance, but I doubt that’s good enough to earn him much more action. Gross actually played much better in May after a sluggish start and he’s been seeing almost identical the PT that he did last year, but I’ve been calling for the Rays to upgrade this position for a while. And with the arrival of Matt Joyce, it definitely looks like Gross’ very negligible value has disappeared.

While we’re talking about extra Tampa Bay outfielders named Gabe, let’s not forget about Kapler. His inability to consolidate that big comeback season has helped open the door for Joyce to win the right field job. In fact, Kapler’s been so bad that we’re now wondering whether he should have quit while he was ahead and headed back to his rocking chair after that fine 2008.

The injury to Jason Bartlett has opened the door for regular action for rookie Reid Brignac, but we’re still waiting to see the kid who was No. 29 on our top prospect list before missing the cut last season. He’s definitely performing a bit better lately, but not enough to draw interest in anything but deeper AL-only leagues for now. Still, put him on your watch list; there’s some serious upside potential here.

By RotoRob
This entry was posted on Thursday, June 4th, 2009 at 11:32 am and is filed under BASEBALL, Fantasy Notes, RotoRob. You can follow any responses to this entry through the RSS 2.0 feed. You can leave a response, or trackback from your own site.