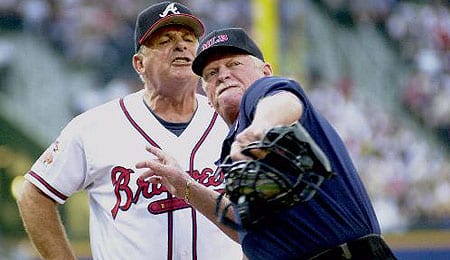 Bobby Cox, left, is trying to keep Chipper Jones fresh by giving him the occasional off day.

Fantasy owners were probably a little perturbed to see that Chipper Jones wasn’t in the lineup for the Braves Thursday night, especially since he had busted out on Wednesday with two hits, including a double, two RBI and two walks. But there’s nothing to worry about here; Manager Bobby Cox was simply giving good old Larry a day off in an effort to keep the recently turned 37-year-old fresh. Prior to his nice game Wednesday, Jones had been struggling a bit, if you can call hitting .295 struggling. But let’s face it – he ain’t going to be putting up another .364 BA this year. Still, if you’re in a league that factors in OBP, Chipper is one of the biggest studs in the game. He’s drawn walks in six straight games and is earning free passes at a higher rate than any season except for his 1999 MVP campaign. Unlike, say, Dioner Navarro (.213 OBP), who needs a set of airport landing strip lights to guide him, Chipper knows the way to first base.

Ryan Howard bounced back from an 0-for-4, three-strikeout night on Wednesday courtesy of Johan Santana with a double, homer and two ribbies on Thursday, but it wasn’t enough as the Phils lost again, 7-5, and were swept by the Mets at Citi Field. RyHo is hitting well lately, delivering hits in six of his last seven games. On Monday, he etched himself into the Phillie record book by tying Hall of Famer Mike Schmidt with seven career grand salamis, and Thursday, Howard’s dinger was a gargantuan blast over the 415-foot sign in right-centre field. The man can mash, and owners have to love the fact that Howard has been quite durable over the past couple of years. He’s on pace for another 100-run season, and his power is obviously coming around after a relatively slow start. Of course, slow starts aren’t a novelty for Howard, traditionally a big second half player. No, he has yet to live up to our pre-season billing as the No. 5 first baseman, but I have no doubt he’ll be there in the end. While his walk rate has been slipping for a couple of years, I’m impressed by the fact that Howard is striking out less often this season. And, of course, he remains one of the top run producers in all of baseball, headed for another season of 135 to 140 RBI.

The Phillies rotation has been pretty damn disgusting so far (just six total wins), but I’m not ready to stick a fork in Joe Blanton quite yet. He looked very sharp Monday in earning his first win of the season (and first since September 26), and that’s now three quality starts in his last four outings. He’s barely owned in any leagues at all, but I think there’s an opportunity to buy low here. On Saturday, Blanton gets the Braves, who have been middling offensively this season, but really struggling to score lately. Sure, that .330 BAA will scare off plenty of people, but I’ve been right about Blanton before. Last season, I predicted he would adjust to the NL after his sluggish start in Philly, and sure enough, opponents hit just .226 and .245 against him during the last two months of the season. I’ve heard reports that Blanton’s velocity is down a bit, and that’s troubling, but I’m willing to gamble that he is going to turn the corner and be a useful fantasy asset. He’s worth another look.

Kyle Lohse has been a strong waiver wire pickup in recent weeks thanks to his excellent start in which four of his six starts have been of the quality nature. And while I wouldn’t suggest he’s not a decent short-term option – after all, he gets the weak-hitting Reds in his next outing – Lohse’s Chris Carpenter imitation is due to end sooner rather than later. First of all, his (non-pitching) elbow is sore. What’s up with that? Second of all, he’s coming off his worst start of the season on Monday, in which he suffered his first loss. He lasted only 4 1/3 IP for his shortest outing since mid-August. Yes, Lohse’s K rates are up, but his walk rates are up even more, and if you think he’s going to be able to sustain that career-best .235 BAA (his lifetime mark is .281), you’re deluding yourself. Lohse is an excellent sell-high candidate.

Call it Manny fallout. The Dodgers not only suffered their first home loss Thursday after setting a major league record by starting the season 13-0 at home, but their up-to-this-point superb bullpen sprung a leak, giving up 10 runs over the last three innings. Oops. So, let’s talk about this 50-game suspension to Manny Ramirez, which pretty much kills the hopes of many an owner, myself included. ManRam has already started winding up on the wire in shallower leagues, a trend that will continue over the next few weeks. But how do the Dodgers replace one of the best run producers in the game? A man who, after scoring a run in his last three games, was on pace for 130 runs? Juan Pierre got the first start in left field, and immediately contributed a 2-for-4 showing with a steal. Look for Xavier Paul to also get his shot, and each of them have been popular wire picks over the last day or two. Matt Kemp stepped up big-time Thursday, but Andre Ethier’s numbers could suffer without Manny there as protection. Don’t think so? Just take a look at what’s happened to David Ortiz without Ramirez hitting behind him. Meanwhile, it will be interesting to see how the defending NL West Champs recover from this episode. I bet Joe Torre is thinking ‘didn’t I leave all this crap behind me in the Bronx Zoo?’

By RotoRob
Tags: BASEBALL
This entry was posted on Friday, May 8th, 2009 at 12:12 pm and is filed under BASEBALL, Fantasy Notes, RotoRob. You can follow any responses to this entry through the RSS 2.0 feed. You can skip to the end and leave a response. Pinging is currently not allowed.