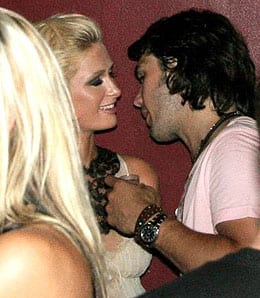 When Jose Theodore isn’t trying to get into Paris Hilton’s pants, he’s had a great seat on the Capital bench while watching a rookie steal his job during the playoffs.

The second round of the Stanley Cup playoffs has been great. One of the nice things about it is that players have been living up to their hype. The best example of this is Sidney Crosby versus Alex Ovechkin in the Penguins-Capitals series.

Crosby has four goals in the first three games while Ovechkin has five. Evgeni Malkin, who slumped badly in the series, came back big time in Game Three with a goal and numerous scoring chances in just under 30 minutes of ice time. Perhaps the only person in the entire series who hasn’t lived up to expectations (other than exiled Washington goalie Jose Theodore) is Capital defenseman Mike Green, who has just a goal and six assists in the playoffs. Teams are definitely playing him tightly, but he hasn’t found a way to get the space he needs and perhaps even more importantly, he hasn’t had the confidence to cheat on defense as he did during much of the regular season.

The Chicago-Vancouver series has also been great to watch. Basically, Chicago has continuously tried to bait Vancouver into a wide-open, run-and-gun game, and the Canucks have tried to resist, with occasional lapses. Game One was a microcosm of the series, with Vancouver taking the lead, only to let Chicago trick them into opening things wide up in the third. The Canucks came back and held the lead. With a goaltender as good as Roberto Luongo, Vancouver just needs to be disciplined, resisting the contagious, youthful joie de vivre of the Chicago Blackhawks. (Yes, I just used the term ‘joie de vivre’ in a hockey article; so sue me.)

Finally, are there two teams more completely devoid of post-season personality than the Bruins and the Hurricanes? They’re good, solid teams, but there is just no magic on the ice. Even watching Carolina’s Sergei Samsonov, long thought to be dead, burning his old team in overtime by setting up the game-winning goal, lacked a certain urgency. You don’t see anyone on the ice who would take an actual risk to win a game. It’s two teams of safe players playing good hockey, but not risky hockey. And risk is what makes the game exciting. Just ask the Blackhawks.

The President’s Trophy-winning San Jose Sharks may have experienced another early demise from the NHL playoffs, but their Sharklings play on in the AHL playoffs. Worchester currently trails the Providence Bruins 2-0 in the Atlantic Division Finals, but it’s got to be great for San Jose to see the development of yet another young star in centre Logan Couture. The ninth overall pick in 2007 signed a deal with Worchester near the end of the season, and has been gaining valuable pro experience. Wednesday, he logged his first assist of the playoffs to go along with a pair of goals and a +3 ranking through eight games. This 20-year-old kid is a great two-way player who has drawn comparisons to Steve Yzerman. There’s a possibility he could make the parent club next fall as a couple of forward slots will likely open up.

By Steven Ovadia
This entry was posted on Friday, May 8th, 2009 at 11:12 am and is filed under HOCKEY, Ice Chips, Steven Ovadia. You can follow any responses to this entry through the RSS 2.0 feed. You can skip to the end and leave a response. Pinging is currently not allowed.