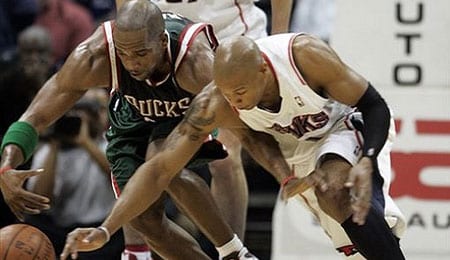 The Hawks are in serious trouble if Maurice Evans, right, is their leading scorer again Saturday. (AP Photo)

Saturday night, the Atlanta Hawks will look to halt, or at least slow down, the seemingly unstoppable Cleveland Cavalier express.

After losing the first two games of this Eastern Conference semifinal series by a combined 37 points, the Hawks are hoping home cooking can provide the answer they need to help them get back in this series.

But as if things aren’t grim enough for Atlanta, it is suddenly dealing with major injury issues to key personnel.

Centre Al Horford (ankle) and forward Marvin Williams (wrist) were both sidelined Thursday, as the Cavs trounced the Hawks 105-85. To make matters worse, two-guard Joe Johnson hurt his ankle in the third quarter and did not make it back.

Horford was able to practice Friday, but his status for Game Three is questionable. Williams also practiced, but he too will be a game-time decision on Saturday. Johnson, who was in a walking boot after Game Two, said he can’t see himself not playing Saturday. X-rays were negative, but Johnson did not practice on Friday; he’s also expected to be a game-time decision.

That’s a hell of a lot of uncertainty facing the Hawks, already staring at the daunting task of trying to contain this steamroller of a Cavs’ squad.

Horford and Williams have been dealing with injuries throughout the playoffs. Horford originally sprained the ankle in Game Five against Miami last round.

Zaza Pachulia did a great job filling in for Horford in Game Two, scoring seven points with 12 boards, a block and a steal. He’s been asked to play significantly more minutes in the playoffs with Horford missing some time, and he’s done a solid job, but obviously the Hawks’ overall frontcourt depth takes a major beating without Horford, who averages a near double-double.

Maurice Evans, meanwhile, got the nod for Williams, and he also turned in a fine game Thursday, sinking 7-of-12 shots for a team-high 16 points with four assists, three rebounds and a steal. He is also seeing more action in the playoffs, but hasn’t been extremely effective, notwithstanding last game. Evans tends to run hot and cold, and another heavy dose of him is not what Atlanta needs right now. The Hawks certainly can’t have this dude be their leading scorer.

The Hawks are undoubtedly pleased to be coming home; putting up points on the road has been a serious problem for them come playoff time. In fact, after being held to 85 points on Thursday, they have now failed to score 90 points in 15 straight road playoff games – the longest such streak in the shot-clock era. That obviously puts serious pressure on their defense to be stellar, and while the Hawks’ D was very strong this year, it wasn’t that dominant. And if you can’t win on the road during the playoffs, you won’t last long. Last round, Atlanta managed to win Game Four in Miami, 81-71, but that kind of result isn’t going to happen often. And it’s sure not going to happen against the Cavs the way LeBron James is bringing it now.

Atlanta has dealt with injury problems all season long, especially with Williams (21 games missed), Horford (15) and Josh Smith (13), yet they rode an improved defense to a 10-win improvement over last season.

It’s time for that defense to step up if Atlanta has designs on making this series competitive. Cleveland shot 53.5 per cent from the field in Game Two, and that’s unacceptable. Sure, it helped that Cleveland did a great job of getting to the line, but Atlanta needs to try to do a better job of exploiting the Cavs’ weaknesses, few that they are.

Cleveland is not a strong offensive rebounding team (mind you, Atlanta is even worse), so if the Hawks can clean up under their own basket, get out in transition and pile up more fast break points, they might have a chance to hold their own. Of course, Horford is by far Atlanta’s best interior defender, so having him back and healthy would be a good start.

If Johnson can’t go Saturday, Atlanta needs Mike Bibby to step up and have a monster game. Thursday, he was just 3-for-8 for 11 points and just one assist – that ain’t going to get it done from your starting point guard. He nailed five treys in Game One, but had just two Thursday. His perimeter game is a big weapon for Atlanta, so the Hawks need to find a way to get Bibby some open looks from beyond the arc.

With Horford hurting and Pachulia pressed into a starting role, even Solomon Jones, who has been mostly an afterthought in these playoffs, had to play significant minutes off the bench. He has no scoring touch to speak of, but did pitch in with three boards when he wasn’t fouling people. At one point in Game Two, he was guarding King James, and that’s a mismatch the Hawks can’t afford to see again.

It sure would help if J Smoov stepped up as well. He was simply awful on Thursday, sinking just 2-of-13 for eight points, with one lousy rebound and just one block and one steal. Smith’s scoring has been a bit better in the post-season, but after topping 20 points in the last two games – he was the only Hawk worth talking about in the opener — he was a complete non-factor in Game Two. That will have to change.

What Atlanta really needs is Johnson to return and rediscover his regular season form. He’s looked tremendously ordinary in the playoffs, except for a couple of standout games against the Heat. His shooting – especially from the free throw line – has suffered, and some think he was looking tired. And now he’s hurting.

This does not bode well for a recovery from the Hawks.

By RotoRob
This entry was posted on Saturday, May 9th, 2009 at 9:59 am and is filed under BASKETBALL, RotoRob, Team report. You can follow any responses to this entry through the RSS 2.0 feed. You can leave a response, or trackback from your own site.