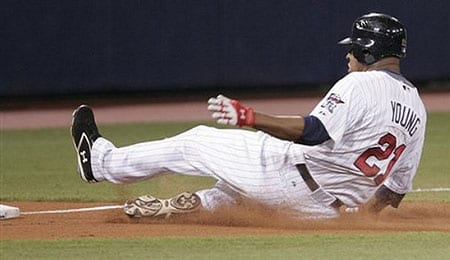 Despite the fact he hasn’t become the superstar we expected, we’d still rather own Delmon Young than Brandon Wood.

I have been offered a trade in a keeper league. I have Delmon Young and am being offered Brandon Wood. Is either going to be any good or play?

I just got back from a trip to Minny to catch the Rays and Twins, which is rather appropriate considering your question. Let’s first take a quick spy at the results for both to date.

Young is 23 and now has in excess of 1,300 major league at bats. His strike zone judgment is limited as demonstrated by the strikeout-to-walk ratio. He does hit for a decent average and has shown flashes of both power and speed.

Wood is 24 and has demonstrated huge power potential at the Triple-A level. His strike zone judgment falls into much the same category as Young’s, albeit has been almost exclusively in the minors (so that’s not a good sign). He got called up mid-April and has only been given five at bats since the promotion. As I mentioned in The Wire Troll last week, why did the Angels even bother calling him up if they aren’t going to give him the opportunity to play?

I’d keep Young. He has at least a track record at the MLB level. Unless the Halos make a move to free up a position, it doesn’t appear that playing time is even going to be remotely considered with Wood. Young is at least splitting time with Carlos Gomez and any sort of slump on Gomez’s part – or someone else in the crowded Minny OF/DH situation — could ensure even more at bats. Long term, I prefer Young as he has at least offered some hope at the big league level. Both players are risks but at this time at least Young, with that solid 2007 season, has shown the ability to play at the MLB level, something Wood hasn’t demonstrated to date.

Want your Fantasy question answered by one of our experts? E-mail your question to us or use or handy ‘Fantasy Question?’ link in the left column.

By Tim McLeod
Tags: BASEBALL
This entry was posted on Saturday, May 2nd, 2009 at 1:44 pm and is filed under BASEBALL, Dear RotoRob, Tim McLeod. You can follow any responses to this entry through the RSS 2.0 feed. You can leave a response, or trackback from your own site.