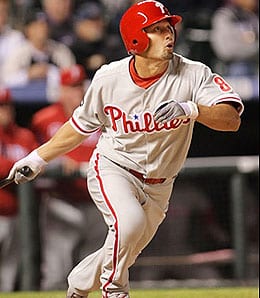 Shane Victorino has dramatically improved his contact rates this season.

The defending World Champion Philadelphia Phillies, while not struggling, are not exactly looking like they are going to cruise to another title. Having dropped two straight games, they currently sit just one game over .500 (11-10) through 21 games.

Philadelphia overcame one of the worst team batting averages last season with its awesome power. This year, they are hitting much better as a team, and the addition of free agent Raul Ibanez is a big reason why. A seven-game hitting streak has run this vet’s BA to .354 as it looks like he has plenty left in the tank, perhaps even including a career year. He’ll be 37 next month, but is obviously loving his first taste of NL ball, playing well above our recent rankings that had him as the 32nd-best outfielder to own.

The Phils weren’t an overly easy to team to strike out last season, but this year, no NL team has whiffed less often. Shane Victorino improved his contact rates last season, but this year, the Flying Hawaiian has taken it to a whole new level. Although he’s whiffed in each of the last two games, he’s only struck out six times through his first 100 plate appearances as he just continues to get better and better as a ballplayer. Victorino is now basically a must-own Fantasy commodity.

Best of all, the Phils have improved their team batting and cut their Ks without really sacrificing their pop as they once again pace the NL in dingers. As usual, Chase Utley is leading the way, off to yet another one of his patented blazing starts. After going yard against the Mets Friday – his third long ball in three games — he has eight dingers, 21 RBI and a .347 BA through 21 games. If you’re seeking early-season MVP candidates, Utley is once again in the running, ranking third in the NL in homers, runs, OBP and OPS. His owners have to pray that he can keep the party going unlike last year, when his power really waned after the All-Star break.

As a doubles-hitting team, however, Philly was middling at best last year. This season, they have slipped a bit further in that department. And while Utley owners couldn’t give a crap how few doubles their man hits as long as he’s going yard with the regularity he currently is, the fact is that after three straight seasons of at least 40 doubles, he has managed just one two-bagger so far this year. However, you know his home run pace will slow down at some point, and that will mean more of those long balls will turn into doubles.

Overall, the Phillies were one of the top scoring teams in the majors last season, and so far this year, they’ve been doing even better, currently on a pace that will have them threatening 950 runs for the year. Utley, Ibanez and Victorino are leading the way there, but how about a shout out to Jayson Werth as well? Friday night, he scored his 16th run in 20 games, putting him on pace to shatter his career high set last season. Werth’s BA has slipped significantly for the second straight season, but he’s maintaining his value because of all those runs. If this is an area you need help in, check your wire; Werth has been dropped in a few leagues, so if your league is on the shallow side, he could be out there.

Then, there is the flipside of the equation for the Phillies, and the main reason why despite this team’s great offense, they are barely over .500. The pitching has been a mess. Ace Cole Hamels has gotten off to an extremely rough start after reporting to camp out of shape. He was molested in his first start, better in his second start (although it was still no one’s idea of good), and better yet in the third start (although he was knocked out early when he got hit in the shoulder by a line drive). In his last start on Tuesday, Hamels was looking sharp, but he has to leave early again after spraining his ankle. A scheduled bullpen session Friday was scrapped because of rain, and he may have his next start pushed back a day, or perhaps have it skipped altogether pending how he feels when he throws a session Saturday. It’s early, and Hamels should be fine, but the Phils aren’t going to take any chances with him. Independent of his injury woes, the early-season home run problems are a slight concern, though the fact that his K/9 is right where it was last season during his breakout campaign suggests to me that there’s no real reason to worry about him.

By RotoRob
This entry was posted on Saturday, May 2nd, 2009 at 12:06 pm and is filed under BASEBALL, RotoRob, Team report. You can follow any responses to this entry through the RSS 2.0 feed. You can skip to the end and leave a response. Pinging is currently not allowed.