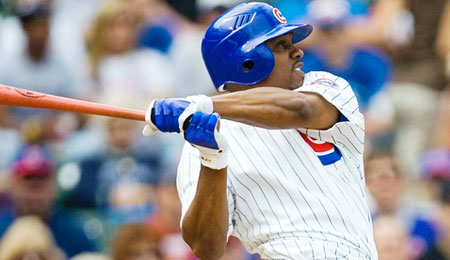 Jacque Jones takes his declining power to Detroit for a fresh start.

Jacque Jones, long rumoured on his way out of Chicago, has finally been dealt by the Cubs, heading to Detroit yesterday for utility man Omar Infante.

You may recall that Jones was almost dealt to the Marlins at the deadline last season, but it turned out that not making that deal was a wise move for the Cubs ” despite struggling through the worst power season of his career, Jones hit .332 after the break and was a key player in helping the Cubs get back to the playoffs.

Jones signed a three-year deal with the Cubs in 2006 for $16 million. He’s capable of playing all fields, but is best suited to handle either centre or right field. However, with Curtis Granderson and Magglio Ordonez in centre and right, respectively, for the Tigers, Jones will be asked to solve an ongoing problem in left field in Detroit.

As part of the deal, Chicago sent some cash to Detroit to help pay for the differences in salary (Jones makes $5 million; the arbitration-eligible Infante made just $1.3 million last year and likely won’t get much of a pay hike).

Let’s break this deal down by looking at the potential winners and losers here.

By RotoRob
This entry was posted on Tuesday, November 13th, 2007 at 2:50 pm and is filed under BASEBALL, RotoRob, Transactional analysis. You can follow any responses to this entry through the RSS 2.0 feed. You can skip to the end and leave a response. Pinging is currently not allowed.