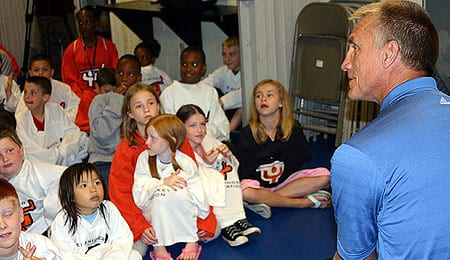 Philadelphia GM Paul Holmgren, right, is leaving no stone unturned in his search for future Flyers.

So the Philadelphia Flyers were once again ousted by the Pittsburgh Penguins this season, only this time — to add insult to injury — they could have won and for long periods looked as though the might. I suppose that suggests they competed hard and made a contest of it, and yet I am very much dissatisfied with the myriad Flyer problems that remain in my view, not properly addressed. I will break my assessment down into four categories: Players, Coaching, Management, and the Future.

First, the glaring lack of a big physical defenseman who can drop bodies with hard checks and move the puck continues to be an issue with the Flyers for reasons that can only somewhat be excused by cap issues and availability of players who fit the physical/offensively skilled hybrid mold. My editor always argues that these players don’t grow on trees, to which I argue, no, they are found in hockey rinks playing major junior, college, and various other levels of the game.

Under GM Paul Holmgren, the Flyers have significantly improved their criteria in terms of what they look for in defensemen and they have some good ones coming up the pipeline. This does not completely excuse them for leaving a soft D unit out there all season; while Andrew Alberts has some size and can be strong in a limited role, his finesse game has extreme limitations.

Randy Jones plays a decent enough positional game and can produce occasionally, and while that suggests two-way play, apart from one unlikely hit that resulted in a suspension, he is almost completely devoid of bringing any physical game to speak of whatsoever. He does enough seemingly to keep from getting traded. This is the very reason I would trade him, and replace him with a more passionate player who can move the puck well and throw a hit. I am not asking for Scott Stevens or Dion Phaneuf; a player like Brooks Orpik would do just fine.

That may seem sacrilegious to a Flyer fan, but the reality is Philadelphia’s defense can skate, but at times seem almost fearful of the corners and clearing the crease. This is hockey, not curling, and the defense needs some snarl. I would hang on to Matt Carle, as he upped his game for the playoffs, which is a commodity that cannot be overvalued.

However, I would let go of Alberts because re-signing him will cost a higher draft pick and Luca Sbisa can definitely have his spot – will likely bringing more to the table.

Kimmo Timonen is fine as is. Braydon Coburn just needs to work on his consistency and he should be the player we all see so much potential in.

Ryan Parent may have the brightest future of the pack as a shutdown defenseman without an offensive game — with the exception Sbisa, who hopefully will be just as good defensively and more than capable of contributing on offense.

So, to summarize: Alberts and Jones, adios.

As for the forwards, the only players I would deal are Joffrey Lupul, because his streaky play leaves too many wasted games for players who bring it every shift, and Riley Cote, because you cannot justify a roster spot for a fighter who loses more than he wins. He’s a great guy, but there are better players to be had for his position.

The enigma that is John Stevens has confounded and perplexed me for some time, but my patience has run out. Last season, Holmgren cautioned that the team can’t afford to have another 10-game losing steak that nearly cost them a playoff spot, and by gosh, Stevens did something about it. The Flyers had no long winless streaks other than a stumble out of the gate, yet they also failed to win more than five games in a row after November.

Stevens gets career years from players and can get strong individual performances but he seemingly cannot get the team interested in keeping a lead, playing hard for a full 60 minutes or to stop turning over the puck more often than they enjoy proper break outs. Stevens is a great coach of individuals, but not a good team coach.

His treatment of rookies is laughable. Claude Giroux tied Mike Richards for most playoff points this year, but got so little playing time and was barely employed on the power play despite clearly exhibiting superior play than most of his teammates. Sbisa, meanwhile, was only allowed to sub for a suspended Daniel Carcillo at wing and, even then, he was given precious few minutes.

Stevens may well become a great coach, but he plays favourites without getting the optimum results which is not the same as leaning on your strongest players because they get the job done. Sitting rookies is fine, but only if you have the horses that are doing a better job, and this was not the case in this situation.

Reggie Lemelin has been the goaltending instructor for years and years and never brought anyone to the elite level. I think there is room for new blood in this area as well.

Larry Robinson, Terry Crisp and Jacques Lemaire — among others — have either won a Cup as coach or had startling success and are not working in the NHL and none of their teams turned the puck over more than twice per game — if that — most of the time.

I like Holmgren and I love his drafting tendencies, provided we have enough drafting spots left to get good players.

The Flyers need some physical defensemen who can move the puck, not one or the other, they have to do both or teams just capitalize on their weak side and move in anywhere they want. Yes, Holmgren had cap limitations but the Jaroslav Modry, Steve Eminger and, to an extent, Alberts deals were expensive in terms of the returns. The good news is Homer has some gems headed toward the NHL which leads us to the next category.

It’s really all about the defense. Marc-Andre Bourdon has all kinds of promise; he is a leader, he fights, he nails people with big hits, he scores, he gets assists, he won best defenseman in the QMJHL and he wants to make it in Philly. Kevin Marshall patterns his play after Chris Chelios and plays an agitating shut down game with some offensive ability. Both of these guys are team captains and the Flyers have both waiting in line after Sbisa, so the there’s definitely reason for optimism on the blueline.

I think the James vanRiemsdyk hype is getting a little out of control and while I see him as a good prospect, people are being absolutely ridiculous if they think he is going be capable of doing anything that Eric Lindros did. JVR is a good player if we let him develop. He is nothing at all like Lindros, but he brings his own brand of game and it should be left at that.

vanRiemsdyk is a finesse player with size which is not the same thing as a power forward. That is a big difference, people! I also see him as someone likely to be traded as his commitment to the Flyers vs. his commitment to school seems questionable in some people’s minds.

If any of the trade speculation holds true, the Flyers may get another goaltender and a big defenceman, which is something that would make them quite a force in the East. Time will tell!

By RotoRob
This entry was posted on Monday, April 27th, 2009 at 11:33 am and is filed under HOCKEY, RotoRob correspondent report, Team report. You can follow any responses to this entry through the RSS 2.0 feed. You can skip to the end and leave a response. Pinging is currently not allowed.