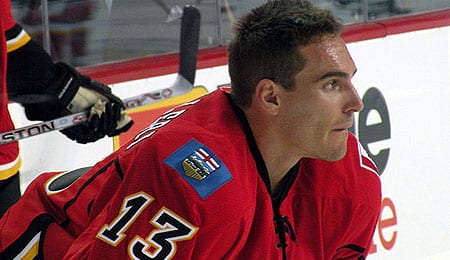 Last weekend was the All-Star Game and while it was great to read that RotoRob actually stepped away from the computer, from a fantasy perspective it was kind of buzzkill. Gaudy offensive numbers that didn’t count for anything. I could barely watch.

Coming back to the real world of fantasy hockey, though, I think we all know the big story this week: Mike Cammalleri.

So yeah, Cammalleri is doing some crazy fantasy stuff this week. And amazingly, with no assists. He’s just looking to shoot the whole game.

As we head toward the trade deadline, a lot of players who aren’t as exciting or prolific as Cammalleri can be expected to change teams. And sometimes that change of scenery is enough to jump start a player.

Take St. Louis’ Keith Tkachuk. His 15 goals and 16 assists are nice, but if the Blues move him, and they do tend to love to move older players for younger ones and/or draft picks, Tkachuk could find himself on a playoff-bound team and start really putting up numbers. Pittsburgh is still looking for a big body to replace Ryan Malone. The Florida Panthers might want some veteran leadership if they find themselves more firmly entrenched in their playoff spot. And the Rangers desperately need someone who can maintain position in the slot for their awful power play. So Tkachuk is someone to watch.

Also, Bill Guerin seems a lock to leave the Islanders via a trade. His 14 goals and 18 assists aren’t much, but they could dramatically amplify on a solid team where he’s not the primary scoring option. Because, for all the talk about how the Islanders are in a youth movement, he’s still playing over 15 minutes a night and has the ears of everyone in the room. Guerin plays under a lot of pressure.

Of course, the older-player-to-new-team gambit doesn’t always work. For every Brendan Shanahan, who put up two goals in his first four games with New Jersey, there’s a Mats Sundin who has the same number of goals, plus one more assist, in his first eight games back.

Oh. And goalie Ollie Kolzig is out for the season in Tampa. He wasn’t playing very well, but he was a warm body for your fantasy roster. I’d say that goalie Mike Smith will get more work because of the injury, but he was already doing the lion’s share of the goaltending in Tampa.