NBA Today: Disco Dirk Puts Big D On His Back 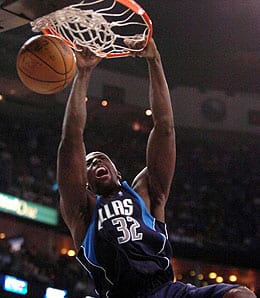 Could Brandon Bass finally be ready for that long-awaited breakout?

Okay, now I remember why we had Dirk Nowitzki ranked as our No. 2 forward headed into the season. His ability to strap the entire team on his back has made him an NBA stud for years, and Saturday night Disco Dirk was in full saviour mode when Dallas needed him most. He couldn’t miss, sinking 16-of-20 shots on his way to 39 points, leading Dallas to a much-needed win over Utah, thus snapping a four-game losing streak. He was clutch when it counted, pouring in a dozen points in the final stanza, when Dallas put the game out of reach by outscoring Utah by five points. It was if nothing could stop him down the stretch. He banged up his shooting elbow, he rolled his ankle, but he just kept sinking shots, canning 7-of-8 in the second half. Better yet, he showed the kind of passion that true leaders do when the chips are down.

How big was this victory? Dallas, currently out of a playoff spot, moved within a half-game of the eighth-seeded Jazz with this win, tightening what should be a fantastic dogfight for playoff positioning in the West over the final couple months of the season.

Nowitzki was in a bit of slump last week, failing to reach 20 points in three straight games, but with nights of 44 points and now 39 among his last three efforts, it’s clear he’s back in a groove. He’s shot well this year (48 per cent), particularly over the past couple of months, and that’s helped Nowitzki erase what was somewhat of a down season for him in 2007-08. Nowitzki’s sluggish performance earlier this month was definitely part of the problem for a Dallas squad that was just 3-5 in January before winning last night. With his huge night, Nowitzki has now gone over 18,000 points in his career; he’s seventh among active scorers and ranks 55th all-time in NBA history, with no signs of slowing down.

As much as the Jazz has been a thorn in the side of Dallas, when it comes to playing in Big D, Maverick victories have been par for the course; Dallas has won 12 of its past 14 home games against Utah.

But these aren’t your father’s Mavericks. They’ve had real trouble beating the teams ahead of them in the standings, suggesting that they are no longer a real power in the West. If only for one night, however, Dallas proved it’s not ready to cede its position quite yet.

Don’t think the Mavs are out of the woods just yet. They now embark on a four-game road trip through the Eastern Conference, and that’s not as easy as it sounds. Although Dallas has played better on the road this season, this won’t be easy with stops in Philly (perhaps the hottest team in the NBA right now), Milwaukee (playing decently lately, and a good home team), Detroit (which is struggling, but is still a solid home team) and Boston (which is back on track after showing some recent cracks). So let’s not print those playoff tickets just yet.

The best part for Dallas Saturday was that as great as Nowitzki was, the team had plenty of contributors, with five players scoring in double figures. Disco Dirk and Jason Terry have been consistent sources of offense night in and night out for the Mavs, but finding scoring on a regular basis from anyone else has proved difficult, hence Dallas’s predicament of being outside the playoff race.

I remember after my media league draft in October expressing surprise that players like Brandon Bass were taken as early as the 12th round. And for the most part, other than the occasional flashes, Bass has been a fantasy afterthought this season. However, I expect him to gain a bit of traction in deeper leagues this week after doing some solid work on the glass in the last few games, and pouring in a season-high 17 points off the bench on Saturday. Bass is shooting well lately, and has taken advantage of more PT. Many had him pegged as a breakout candidate this season, but his numbers are very similar to what he did last season, despite a weaker FG percentage overall. But Bass’s fine play of late could justify you taking a flier on him – especially with Dallas poised for a four-game week.

Despite being given plenty of chances as the starting two-guard, Antoine Wright has failed to generate any fantasy value. In fact, he really hasn’t had much value since early last season when he got to take over for an injured Vince Carter in the Swamplands. However, Wright has put together back-to-back double-digit scoring efforts, so at the very least I’d add him to my watch list. He’s getting more touches (two straight games with 10 FG attempts), and that’s a very good sign. Overall, Wright has been next to useless since leaving New Jersey, simply because he’s not earning the same kind of PT in Dallas, but he’s averaging over 25 MPG in January and has averaged 36 MPG in the last two, so if this trends continues, Wright is going to be worth a flier.

The Mavs, who tend to be a jump-shooting team this year, were far more aggressive than normal on Saturday, taking it to the hoop and pouring in 40 points in the paint. Let’s hope this is a trend rather than an anomaly for Dallas. Creating second-chance points is paramount if this team hopes to turn things around and avoid a lottery pick.

Of course, this isn’t the first time Dallas has had to overcome adversity this season. Remember that ugly 2-7 start, which included a five-game losing streak back in November? The Mavs turned that around by going 6-1 for the rest of November before turning in an 11-4 December and winning their first game of 2009.

Matt Carroll, acquired from Charlotte Friday with Ryan Hollins for DeSagana Diop, is expected to make his Maverick debut Monday afternoon in Philly. It became apparent very early this season that the emergence of rookie D.J. Augustin had rendered Carroll without much use on the Bobcats. He lost his starting job, and the minutes dwindled. Carroll is a deadly three-point threat, but when he’s getting off just over one attempt per game on average, who cares? However, Dallas desperately needs better 3-point shooting, so keep an eye on how Carroll is deployed – he could be a sneaky fantasy asset in the second half.

By RotoRob
This entry was posted on Monday, January 19th, 2009 at 11:24 am and is filed under BASKETBALL, NBA Today, RotoRob. You can follow any responses to this entry through the RSS 2.0 feed. You can skip to the end and leave a response. Pinging is currently not allowed.