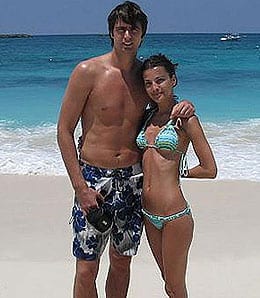 Mehmet Okur may be getting less touches on the court lately, but who cares when he gets to go home and touch this sweet piece of ass?

The Utah Jazz hasn’t missed the playoffs since 2005-06, but it’s going to be in a dogfight down the stretch this season if it hopes to hold onto the eighth and final playoff spot in the West, a distinction the team currently shares with Dallas. The Jazz is coming home Tuesday night, having dropped two out of three games on its road trip. But with Minnesota – unbelievably, the hottest team in the West – in town Tuesday, it’s not exactly a walk in the park. Things get worse after that, as the Jazz – a team that struggles away from home – has to head right back out on the road for a date Wednesday night in Houston against a tough Rocket squad.

Injuries have really helped bring the Jazz back to the pack in the West this season, a year after a dominating 54-win season. While Utah’s defense has improved this season, it’s hardly been world class, and the offense – while still pretty damn good – isn’t nearly as potent as last season.

But in recent seasons, it’s all been about taking care of business at home for the Jazz. Utah has won six straight home games, and going back the last three seasons, it has emerged victorious over 80 per cent of the time (84-18 since the start of 2006-07) when it plays on its own court. Maybe it’s all those multiple wives in the stands. Hey, you can’t help but play better when your team of three wives is cheering you on, right? Small wonder the Jazz is 16-4 at home, the second best home record in the Western Conference.

Recently, Utah has laid beatdowns on the Hornets and Pistons, and overall, has outscored the opposition by an average of 13.5 points during the six-game home winning streak.

Can you tell that Jazz floor general Deron Williams is finally starting to feel like himself? In the last four games, it’s pretty clear he’s finding his legs, sinking almost 50 per cent of his shots from the floor and averaging over 26 PPG. In the last two games, specifically, D-Will has found his range from deep, nailing seven three-pointers. He’s also proving he can long heavy minutes, with an average of 41 MPG in the past two games. Hopefully, like me, you’ve fended off the low-ball offers for Williams as he worked his way back from an early-season ankle woe. Now, it’s time to reap the rewards. Have you noticed that as the season has progressed, he’s gotten more and more comfortable hoisting up long distance shots (in fact, he’s shooting them more often than at any time during his career), and is sinking them with far more regularity? That tells me he’s getting stronger, and I plan on enjoying the ride down the stretch as I look for Williams to help carry me back into a playoff position in my league.

We expected Mehmet Okur to be a top 10 centre this season, and he’s been pretty damn close. Okur was asked to carry a larger offensive role earlier this season with the Jazz dealing with so many injuries. He also did a good job of being aggressive, getting to the line more often than usual. Lately, his touches are down, but he’s maintained his value by being incredibly efficient when he gets the chance. On Saturday, for instance, he nailed 8-of-15 from the floor and canned two treys on his way to a double-double. The thing is, Okur won’t be able to continue shooting at a 56 per cent clip as he has so far in January and, with his diminishing touches, he could be a good sell-high candidate. If you’re strong in rebounding and FG percentage, I’d recommend trying to flip Okur to a team that’s weak in those areas. Maybe you can try to buy low on Rudy Gay, if you believe he’s going to turn things around. If it’s scoring upside you’re seeking, Jamal Crawford might be another player to target.

The absence of rebounding machine Carlos Boozer has really hurt Utah lately, as it has failed to outrebound any of its last five opponents. Boozer was enjoying one of this finest rebounding seasons before getting hurt, and with no clear idea when he’ll return, Utah has been forced to make due. Paul Millsap has been truly amazing, and he’s almost made up for Boozer’s absence, but it’s not as if Millsap can play 48 minutes a game, so the loss of Boozer has filtered down through the team and hurt its overall rebounding capability.

By the way, despite the fact that the Jazz isn’t exactly cruising back to the playoffs this season, team ownership has once again rewarded coach Jerry Sloan, giving him a year-extension on Saturday. After all these years, can you imagine anyone else behind the Utah bench?

Utah has had its way against Minny in recent years (winning nine of 12) – especially in Salt Lake City, not surprisingly (five straight Ws) – but the Timberwolves are looking very different lately. I got a chance to catch a bit of their win over the Clippers Monday, and they impressed with their defense (forcing 16 turnovers and recording eight steals). And let’s face it – most of the season, Minnesota’s defense has been atrocious, so for me to be praising it, this team has obviously made some major strides recently.

In looking ahead for Utah, I’m pretty worried about the game Wednesday in Houston. Not only are the Rockets a solid home team, but the Jazz have to travel from Utah and play the next day. Utah’s record in the second game of back-to-backs? Try a dismal 1-7. This is surprising, considering Utah has plenty of youth on its team, and usually when a team struggles in this situation, it’s because of fatigue, a factor with older teams.

We recommended C.J. Miles earlier this season as a possible waiver wire pick up, but his value has definitely disappeared since then. He’s missed some time with an ankle injury, but returned Friday and was inserted back into the starting lineup. He didn’t play a hell of a lot, but then Saturday, the Dallas native went off for 15 points, three boards and two steals against the Mavericks. If he continues to start, Miles would be worth another look, as he’s getting enough PT this month to generate some value. Put him on your watch list.

By RotoRob
This entry was posted on Tuesday, January 20th, 2009 at 3:00 pm and is filed under BASKETBALL, NBA Today, RotoRob. You can follow any responses to this entry through the RSS 2.0 feed. You can skip to the end and leave a response. Pinging is currently not allowed.