It’s Not a Cookie, it’s Not a Cracker…it’s the Wire Troll 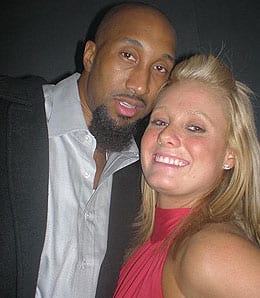 Things are so bad with the beaten up Clippers that even Brian Skinner has emerged as a possible fantasy option (for some, anyways).

Brian Skinner, Los Angeles Clippers: With the Clippers incurring an incredible number of injuries, Skinner is seeing a major bump in minutes. He has reached double figures in four of his last six games – including a season-high 18 points on Saturday – and is doing solid work on the glass. He’s an underrated offensive player and could hold some fantasy value.

With Al Horford (knee) out of action, Zaza Pachulia has started the Hawks’ last four games, averaging 7.8 points and 8.0 rebounds per game. He may not be a long-term solution, but he’s worth a look if you’re struggling for frontcourt help…There’s no denying Samuel Dalembert has been disappointing this year, but he has quietly been doing a better job of blocking shots and rebounding of late. If another owner gave him the Team Canada treatment, he might be worth stashing on your pine to see if this trend continues.

Kelenna Azubuike, Golden State Warriors: For those unfamiliar with Azubuike, all he has done this year is average 13.7 points and 4.8 rebounds per game. He has tallied 20 or more in three of his last seven games and is logging huge minutes with Marco Belinelli (ankle) out of action. Azubuike is on a great offense for generating big fantasy numbers and is worth adding to your roster.

Shane Battier, Houston Rockets: It has been an injury-riddled campaign for Battier, who has played in just 19 of Houston’s 41 games this year. He returned to the lineup as of January 10 and could be asked to assume a larger role in the offense with pillars of health Tracy McGrady (knee) and Ron Artest (ankle) out of action. Battier has never posted huge fantasy totals (although he’s one of those guys who can add a bit of everything to your team), and he’s worthy of consideration given the length of the Rockets’ injury report.

Ryan Anderson, New Jersey Nets: With 37-year-old Yi Jianlian suffering a broken pinky against his former squad, Anderson, this season’s 21st overall pick, has been moved into New Jersey’s starting lineup. He has averaged 8.5 points and 5.3 rebounds in four starts – not exactly Earth shattering – but he has flashed the ability to post solid offensive totals this season. Anderson is getting the minutes to produce, making him a possible flier.

It’s time for our weekly Nenad Krstic update: The 25-year-old has hit double figures in three of his last five games, though he’s still getting outworked on the glass with five or fewer rebounds in all but one game. He’s not going to stay on waivers forever, so act now if you want him on board…None other than Brian Scalabrine makes our list this week as he’s averaging 9.5 points per night in four starts for the injured Kendrick Perkins (shoulder). Scalabrine won’t contribute much beyond his scoring, but with Perkins not expected back for around a month, the big goofy redhead could be a decent stop gap. If your league awards bonus points for having a “ginger” on your roster, so much the better…Ronny Turiaf has been seeing a little more run recently, eclipsing 18 minutes in five of seven games this month. His 6.6 points, 4.4 rebounds and 1.6 blocks per game won’t garner attention in shallow leagues, but those in deeper formats can give him a look.

Von Wafer, Houston Rockets: Per Rockets play-by-play man Craig Ackerman, Wafer is neither a cracker nor a cookie, he’s Von Fucking Wafer! With a ringing endorsement like that how can I not include him in the Troll? All joking aside, Wafer has reached double figures in each of his eight games this month, averaging 16.3 PPG in the process. With McGrady shut down for a while there’s no longer a reason not to enjoy a delicious Wafer in all formats. And if you’re full, not to worry — it’s Wafer-thin!

Daequan Cook, Miami Heat: Is there a better pure outside shooter than Cook right now? The guy has knocked down multiple three pointers in 14 of his last 17 games – and in two of the three games in which he didn’t reach the requisite number of triples he logged just 16 minutes combined. He’s a solid scoring option, but it’s his ability from long distance that makes him a must own.

Luke Ridnour, Milwaukee Bucks: While many were enamored with Ramon Sessions coming into the season after his crazy totals last April, Ridnour has distanced himself in the battle for playing time at the point in Brew City (especially with rumours that Sessions is on the block). He’s averaging 12.2 points and 5.5 assists per game this month and logged his fifth and sixth double-doubles of the season in his last four contests. He’d make a solid addition.

Kirk Hinrich returned Monday, playing for the first time since November 7. He has looked solid coming off the bench and would make an interesting stash option for those with roster flexibility…C.J. Watson opened some eyes by pouring in 26 points in 49 minutes on Wednesday, but he promptly missed the next game with inflammation in his toe. Be sure he’s healthy before you even consider picking him up…Raja Bell is back and seeing plenty of burn with D.J. Augustin (abdomen) sidelined – he is what he is, however — a decent scorer and long-range threat, but don’t expect much in rebounds or assists…Over the last five games, Nick Young has totaled 116 points, including three games of 28 or more. For those looking to roll the dice on someone – look no further…With Steve Blake (shoulder) expected to be out for two-to-four weeks, Sergio Rodriguez moves into the starting lineup. Those in deeper leagues should take note…Staying in Portland, Jerryd Bayless has also benefited from Blake’s injury, racking up 37 points in his last two games. Feel free to add him to your watch list.

By Herija Green
Tags: Brian Skinner
This entry was posted on Sunday, January 18th, 2009 at 4:35 pm and is filed under BASKETBALL, Herija Green, The Wire Troll. You can follow any responses to this entry through the RSS 2.0 feed. Both comments and pings are currently closed.