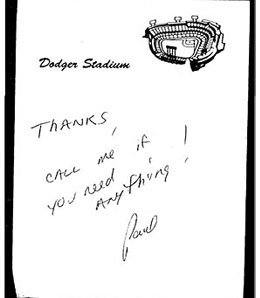 The infamous note from Paul Lo Duca to Kirk Radomski that was discovered by federal agents during a search of Radomski’s home.

After a busy week of football coverage and the continued rollout of our NHL Draft Kit, we’re back with the next part of our look back at the Mitchell Report. You can find the first four parts of the series here, here, here and here.

Four-time All-Star Lo Duca was originally referred to known PED peddler Kirk Radomski by teammate Todd Hundley, and according to Radomski, he and Lo Duca had about a half dozen drug transactions between them. Lo Duca, in turn, introduced Radomski to several players who would become clients, including Kevin Brown, Eric Gagne and Matt Herges. Lo Duca reportedly first start using steroids in 1999, courtesy Triple-A Albuquerque strength and conditioning coach Todd Seyler. While he declined to participate in Mitchell’s report, in the wake of its release, he finally apologized for “mistakes in judgment.” Great. Don’t forget about those needle marks, too, Paul! Lo Duca’s career season came in 2001, his first year as a full-time player. He looked to be in free fall the past couple of years, but a move to Florida seems to have momentarily revitalized his career.

Ankiel was first connected to ‘roids by a September 2007 New York Daily News report that suggested he was a client of Signature Pharmacy, one of the companies that was raided. According to the paper, Ankiel had ordered eight shipments of HGH during 2004 and, after the story broke, he admitted that he had in fact used the drug. The Commissioner’s Office met with him, but ultimately concluded that there was insufficient evidence to discipline Ankiel. After flaming out as a pitcher thanks to injuries and psychological issues, Ankiel made an improbable successful transition to the outfield, enjoying great success there last season before the news broke late in the schedule. This year, he was also having a fine campaign, but once again, injuries have thrown a monkey wrench into his progress.

Right after Ankiel was outed, Sports Illustrated reported that Gibbons was also a client of Signature Pharmacy, buying a reported six shipments of HGH between 2003 and 2005. Gibbons refused to comment on the allegations, but the Commissioner’s Office decided to slap a 15-day suspension on him, to begin at the start of the 2008 campaign. Once the suspension was announced, he admitted his mistake and apologized for it. Sorry! Gibbons enjoyed his finest season in 2005, but has been in free fall since. In fact, he sunk so low that he had to go the Independent Atlantic League to get a job this spring. In late-July, he finally got back to organized ball, signed by the Brewers to a minor league deal. Gibbons had to start at Double-A, and after five games of barely acceptable production, he was promoted to Triple-A, where he hit well, but never got a sniff of a Milwaukee brat. Clearly, he faces an uphill battle to get back to where he was a couple of years ago.

Cust, a teammate of Larry Bigbie’s at Triple-A Ottawa in 2003, apparently told Bigbie he had used steroids and that he had a source who could score him some PEDs if he needed them. Cust refused to be interviewed for Mitchell’s report and, after the report came out, denied ever using ‘roids. He enjoyed a breakout season for the A’s in 2007, and while he hasn’t quite been able to duplicate that this season, he does have a career high in home runs.

According to Radomski, in 1995 he was introduced to Laker by Expo teammate David Segui, a man famous for his ‘roid hookups. Radomski said he sold Laker steroids on a couple of occasions, a fact that was verified by Laker, who was one of the rare former players who agreed to be interviewed for the Mitchell Report. Of course, he didn’t have much choice; as a member of the Cleveland Indians’ staff, he was required by the Commission’s Office to participate. Laker confided to Mitchell that he first considering juicing up prior to the 1995 season, and began researching the idea. His first purchase was in 1995 and his last one was in 1999, and he says he stopped using during the 2000 season. Laker was always a back-up catcher, battling for jobs year after year. In a brief run with the Pirates in 1998, he hit very well, but probably his finest season ever was in 1995. After a four-game callup with the Indians in 2006, he was DFAed, and never made it back to The Show.

According to Radomski, in 1994, Manzanillo, a journeyman pitcher for 14 seasons, asked to be injected with ‘roids. Radomski complied, in what he says was the only instance he ever actually saw a major leaguer juice up. Through his lawyer, Manzanillo stated that a Mets’ clubhouse attendant repeatedly approached him and encouraged he buy steroids during the early ‘90s. He admitted buying them, but said he chickened out and never took them. Further, Manzanillo’s lawyer says his client never took PEDs. In 2001, Manzanillo was fingered by Jose Cervantes as someone he sold prescription drugs (not steroids or HGH, however), but Manzanillo’s lawyer shot down that incident as well. Manzanillo’s finest season came in 2000 and he last pitched in the bigs in 2004. In 2005, he failed to make the Red Sox and was released.

Hundley, a two-time All-Star, has known Radomski since 1988, and, Radomski says, Hundley started buying ‘roids from him in 1996. Hundley, who denied Mitchell an interview, exploded in 1996 for 41 homers – a record at the time for catchers — and followed that up with an even better season in 1997. Injuries really hurt him from then on, but in 2000, he was fantastic, mashing 24 homers and driving in 70 runs for the Dodgers in just 90 games. He struggled badly with the Cubs the following season, and then rebounded somewhat in 2002, despite more injury issues. In 2003, he played slightly better again, but was limited to 21 games and was done after that year.

Next up, in our seemingly endless series on the Mitchell Report, we’ll look at Chris Donnels, Mark Carreon, Hal Morris and others.

By RotoRob
This entry was posted on Thursday, September 18th, 2008 at 10:20 pm and is filed under BASEBALL, Performance enhancing drugs, RotoRob. You can follow any responses to this entry through the RSS 2.0 feed. You can skip to the end and leave a response. Pinging is currently not allowed.