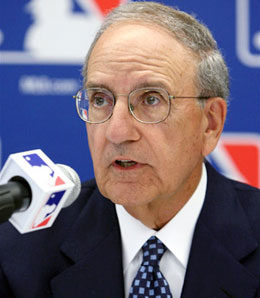 Former Senator George Mitchell exposed a bevy of MLB players in his report.

And we’re back, with more of our retrospective look at the Mitchell Report. You can find the first three parts of this series here, here and here.

Benard’s name came up when BALCO president Jim Valente was interviewed by federal agents on the day of the raid. He said that trainer Greg Anderson had gotten “the cream” and “the clear” for his client, Benard. Benard was subsequently one of the players who got subpoenaed to appear before the Grand Jury during the BALCO hearings. When the allegations regarding Benard’s drug use were exposed, Giants’ manager Dusty Baker asked him if they were true and, according to Baker, Benard admitted using ‘roids, but said he no longer was taking anything. Baker never passed Benard’s admission along to anyone in the organization or in the Commissioner’s Office. Benard enjoyed an excellent season as an extra outfielder in 1998, but the following year was likely his best season as a full-time player. By 2001, he was more or less back to being a part-time player, and two years later he was done as a Giant. In 2004, he wound up in the Jays’ organization, but never again appeared in a big league game.

Velarde was also among the players Valente fingered as someone Anderson supplied PEDs to. And, just like Benard, Velarde was subpoenaed to appear before the Grand Jury during the BALCO hearings. Through his attorney, Velarde agreed to be interviewed by George Mitchell and during that process, admitted to using drugs. Apparently, the transaction with Anderson occurred in 2003, as Velarde was hanging on and trying to continue his career. As it turns out, Velarde never played in the bigs that season or ever again. His career year came in 1999, a season he split between the Angels and A’s. Overall, he cranked 100 homers and hit .276 in a 16-year career.

Jason’s kid brother was also on Valente’s list of Anderson-supplied players. Valente further said that both Giambi boys had tested positive in tests done by BALCO. Like all the athletes exposed in the BALCO scandal, Jeremy was required to testify at the Grand Jury hearings. According to the San Francisco Chronicle, which somehow got a hold of all the testimony, Giambi admitted to the Grand Jury that he had injected himself with HGH and testosterone prior to the 2003 season. He declined to be interviewed for the Mitchell Report, but he had already admitted, to the Kansas City Star in 2005, that he had taken ‘roids. According to Ethan Stein, a former minor league teammate of Giambi’s, Giambi told him way back in 1996 that both he and his brother had taken PEDs. Giambi’s finest season came in 2002, when he smacked 12 homers in just 156 at bats for the Phillies. The following season, he struggled in a smaller role with the BoSox, and never appeared in the majors again. In 2005, he played briefly at two levels in the ChiSox organization, but hasn’t played professionally since.

Joyner, a teammate of Ken Caminiti’s in 1998, admitted to Mitchell that tried steroids three times, but then discarded the rest and never took them again. Although he had a big season with the Padres in 1997, Joyner was never able to really approach the form he showed in his sophomore season with the Angels in 1987, when he smacked 34 homers and scored 100 runs. Overall, he cranked 204 homers and hit .289 in a 16-year career.

Estalella was a client of Anderson, so by association, he was ordered to appear before the Grand Jury after the BALCO fallout. However, according to the Chronicle, Estalella did in fact admit to using ‘roids during his testimony. When Mitchell asked to interview him for the report, Estalella declined. According to the book Game of Shadows, Estalella called Anderson in 2002 to help him recover from a shoulder injury. Part of the recovery plan was HGH. The club suspected he was using, but of course, no one reported anything. The catcher’s finest season came in 2000, with the Giants. He was a part-time player over the next four years, bouncing from team to team. Estalella was in camp with the Mets in 2006, but early on he left and retired.

Crawford fessed up to taking ‘roids while he was a member of the Boston Red Sox in 2000 and 2001. However, he declined to be interviewed by Mitchell, saying he didn’t do that kind of thing anymore. Crawford didn’t have much of a big league career, never appearing in the Show again after 2001. He spent one more season in the Red Sox organization, before heading to Indy ball. Crawford got back into organized ball in 2004 with the Reds, but in 2005, he was back in the Independent Atlantic League, and it appears that was the end of the line for him.

Matthews was originally connected to ‘roids by the media as a suspected client of Signature Pharmacy, which was raided by police. In February 2007, the Albany Times Union reported that Matthews was on the customer list of Applied Pharmacy Services, another compounding pharmacy that came under investigation. Later, Sports Illustrated reported that Matthews was shipped HGH by Applied in 2004. Shortly thereafter, Matthews issued a statement saying he had never taken HGH at any time. After an investigation, the Commissioner’s Office decided there was insufficient evidence to suspend Matthews, even though Chad Allen, Matthews’s teammate in 2004, said he found syringes in the apartment that he was sharing with Matthews and another player. Matthews enjoyed a breakthrough season in 2006, but injuries and ineffectiveness have put him in a downward spiral since. In fact, this year has been the biggest struggle for Matthews since his rookie season in 2000.

Next up, in Part V, we’ll explore the stories of Paul Lo Duca, Rick Ankiel, Jay Gibbons and others.

By RotoRob
This entry was posted on Monday, September 15th, 2008 at 10:50 am and is filed under BASEBALL, Performance enhancing drugs, RotoRob. You can follow any responses to this entry through the RSS 2.0 feed. You can skip to the end and leave a response. Pinging is currently not allowed.