The Mitchell Report Revisited, Part I 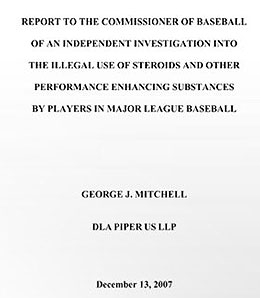 How have the players involved in the Mitchell Report fared since they were outed?

We rarely cover performance enhancing drug issues here on RotoRob, but I thought it might be interesting to look back on the Mitchell Report, almost a year after the fact, and see how the players mentioned within the tome have fared. Of course, many of the players fingered in the report are no longer active (many as a direct result of the controversy), but let’s do our best to see what, if any, effect Mitchell’s findings have had.

Doubtlessly the finest pitcher of his generation, Clemens won 354 games in a career that has been clouded by the Mitchell Report’s suggestions that Jose Canseco introduced the Rocket to PEDs. Even though Clemens has not pitched this season, and his career apparently is over, he remains in the news, most recently with a report that Kirk Radomski offered evidence that he shipped drugs to Clemens’s home in Texas. What a fall from grace for the Rocket.

Brian McNamee, the former trainer who has been made notorious by the report, told Mitchell he injected Pettitte with HGH in 2002, something the pitcher admitted to a couple of days after the report was released. Pettitte got hooked up with McNamee when he and Clemens were trained by him during the offseason in 2001. This season, Pettitte is suffering through his worst season since 1999, however, barring a late start to the season, he’s remained healthy.

Giambi was fingered by Victor Conte, another of the key players in the steroid scandal, after the infamous BALCO raid in September 2003. In 2004, Giambi suffered through the worst season of his career. Although he still hasn’t been able to stay fully healthy since then, his performance bounced back in a big way in 2005 and 2006 before dropping off again last year. To his credit, Giambi has enjoyed another solid rebound season this year and has avoided the serious types of injuries that plagued him last year.

Bonds was also outed by Conte after the original BALCO scandal in 2003. Bonds responded by enjoying his best season ever in 2004, although he slipped after that, and is now out of baseball, apparently blackballed by MLB, according to his agent. Of course, Bonds has bigger issues than trying to find a new team to play for; he’s facing 15 felony charges for perjury and obstruction of justice. Fun!

Palmeiro first was ushered into the ‘roid investigations when he was questioned by the congressional hearing in March 2005 about whether he had taken PEDs, testimony that was later suspected to be lies, something Miguel Tejeda was grilled about with the whole B12 injection story. Mitchell sent Palmeiro’s lawyer a letter with specific questions about Raffy’s PED use, but the letter was ignored. The steroid allegations proved so distracting (coming to a head at a game in Toronto when myself, with three friends, helped boo him out of baseball), that the Orioles essentially told Palmerio, whose career had been in free fall since 2003, to stay away from the team. Prior to the 2007 season, Palmeiro expressed interest in making a comeback, but the Rangers said no thanks, and no one else took the bait.

Roberts was introduced to supplier Radomski by teammate David Segui in 2003 and later admitted to Larry Bigbie that he injected himself once or twice in 2003. A few days after the release of the report, Roberts publicly admitted his mistake. In 2005, he enjoyed a career year, experiencing a tremendous spike in power. He backtracked in 2006, but bounced back somewhat last year, and has continued his resurgence this year, setting a new career high in triples.

The AL’s 2002 MVP and an ironman who played in the fifth most consecutive games in MLB history, Tejada’s first documented steroid episode came in 2003, when he asked teammate Adam Piatt if he had any ‘roids. Piatt further admitted that he gave Tejada some, but did not know if he took any or not. Later, of course, Palmeiro fingered Tejada for the infamous B12 injection. Tejada had a career year in 2004, but started sliding last year, a decline that has really continued this season. In fact, since 2004, when he slammed 34 homers and drove in 150 runs, Tejada’s power numbers have slipped every season.

The 2003 Cy Young winner, Gagne was tied into the scandal by Radomski, who said that Gagne’s teammate Paul Lo Duca called him up and told him that both he and Gagne wanted to get hooked up with some HGH. Radomski further alleged that Gagne came on the phone and asked him a question, and this was the only time they ever spoke. Radomski wasn’t sure of the exact dates, but it’s believed to be around 2003 or 2004, however, it could have been as early as 1999. Gagne enjoyed another dominant season in 2004, but injuries began to strike the following year, limiting him to 16 appearances total in 2005 and 2006. He returned to moderate health last year, but wasn’t nearly as effective, and this season, injuries struck again, and he’s endured his worst year ever.

Sheffield was another player who’s lawyer received a letter from Mitchell, but who failed to respond. He was also another player mentioned by name by Conte in the BALCO aftermath. Sheffield enjoyed a monster year in 2003, setting a new career high in RBI. His numbers slipped the next three seasons, bottoming out in 2006, when he missed most of the season. He rebounded somewhat last year, with 25 home runs, but has struggled this year, thanks in a large part to his shoulder. Sheffield bears no resemblance to that super productive player that drove in at least 120 runs every season between 2003 and 2005.

Next up, we’ll continue our review of the Mitchell Report with Part II, focusing on some of the other bigt-time players who were named, including Juan Gonzalez, Ken Caminiti and Troy Glaus.

By RotoRob
Tags: The Mitchell Report
This entry was posted on Saturday, September 6th, 2008 at 5:40 pm and is filed under BASEBALL, Performance enhancing drugs, RotoRob. You can follow any responses to this entry through the RSS 2.0 feed. Both comments and pings are currently closed.