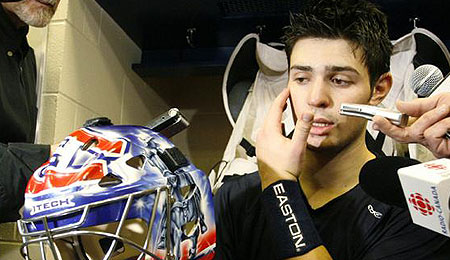 Carey Price will be under plenty of scrutiny this season; you should do the same before selecting him for your fantasy team.

We wrap up the meaty part of the 2008-09 RotoRob NHL Draft Kit with Mike’s selections of players you might want to think twice about before drafting. Going forward, look for us to cover fantasy-relevant news and notes from around NHL camps and pre-season action as we head towards the new season.

When considering which players to be cautious with, keep in mind the overall context of the pick. You’re going to see a whole mix here: top-tier superstars, offensive defensemen, starting goalies, and more. It’s important to remember that just because someone is on this list, it doesn’t mean they’re necessarily a bad pick if they’re available. Buyer beware simply means that said player may not be the best pick for whatever reason (injury, bad team, coaching problems, etc.) when compared to the players in his immediate talent group.

For example, my No. 1 buyer beware is Ilya Kovalchuk. I’ll give the exact reason below, but needless to say, if you can claim Kovalchuk in the mid-rounds when players like Patrick Sharp are being selected, go get him.

With that disclaimer, here we go.

1. Ilya Kovalchuk, Atlanta Thrashers: Yes, he broke 50 goals again. Yes, he was the heart of the Thrashers. Yes, he’s young and immensly gifted and really, really wants to win. But if you look at the bulk of where Kovalchuk did his damage, it was with Marian Hossa in the lineup. Jason Williams and Colby Armstrong aren’t chopped liver but they are not the same calibre player as Hossa. One guy can only do so much, so don’t look for Kovy to repeat his 50+ goals unless another Thrasher really breaks out.

2. Marian Gaborik, Minnesota Wild: Gaborik returns for another season under Minnesota’s stifling defensive scheme — this time, without Brian Rolston or Pavol Demitra. Take away the Wild’s best centre and Gaborik’s offensively gifted buddy and you’ve got the heavy burden of a franchise laying on the shoulders of one guy. Make that one injury-prone guy (more than 50 lost games in the past three seasons).

3. Carey Price, Montreal Canadiens: Sophomore slumps happen, and it doesn’t mean you won’t move on to a Hall of Fame career. Will Price improve in his second year or will he struggle with consistency like Carolina’s Cam Ward? Hope for the best, but expect the worst with Price — and that means understand that there’s a real chance he may not be a consistent dynamite goalie…yet.

4. Johan Franzen, Detroit Red Wings: Franzen was all the rage in the playoffs, putting up goals at a ridiculous pace when he was healthy. Will he score at this second-half/playoff clip? No, he won’t. Thirty goals is a reasonable expectation for this second coming of Tomas Holmstrom. Bypass the hype and only take Franzen in the mid rounds.

5. Alexei Kovalev, Montreal Canadiens: Just a little while ago, Hab fans wanted to lynch Kovalev (or at least pour melted cheese curds and scalding hot gravy all over him). One 84-point campaign later and suddenly the guy is the toast of the town. The two seasons prior to that, Kovalev put up 65 and 47 points, respectively. At age 35, it’s much more likely that Kovalev will regress from his stunning rebound.

6. Wade Redden, New York Rangers: Despite his new Manhattan digs, Redden remains the same player he was in Ottawa the past two seasons: nervous, unsure, and prone to bad turnovers and poor decisions. Put it this way — look at all of the offensive talent he had to work with in Ottawa and his numbers still declined despite the fact that he’s on the good side of 30. It won’t come much easier on a Jaromir Jagr-less Ranger squad.

7. Mark Streit, New York Islanders: Here’s an abberation for you — Streit’s once-in-a-lifetime season of 62 points came at age 29. Coincidentally, it came on a squad where everything just came together. Now the blueliner is going to a New York Islander team that has a bunch of over-the-hill veterans. There’s no doubt that Streit’s points will drop. The question is: how much?

8. Chris Drury, New York Rangers: Despite his monster contract, Drury really has never been a massive scorer. A lot of people forget that. He’s a solid lock for 55 to 65 points and some good playoff numbers (and even that didn’t quite work last season), but now that the Rangers have less talent up front, the puck won’t go in the net any easier for Mr. Little League World Series. (Sorry, Chris…just had to get that one in there.)

9. Bryan McCabe, Florida Panthers: When we did our defenseman cheat sheet, an irate reader (probably one of those crazed Leaf fans who think the team will be a legitimate contender this year) called us out for excluding McCabe. Well, McCabe’s spirit may be rejuvenated by the Florida sun — hey, he did waive a no-trade to go to a…non-playoff team? — but his roster won’t necessarily be better. Sure, he’ll play with Jay Bouwmeester but his power play partner in Leafland was Tomas Kaberle. And as bad as the Leafs were last season, it’s not out of the question to wonder if McCabe’s forwards will be worse this season.

10. Pavol Demitra, Vancouver Canucks: Vancouver’s one true hope in adding some offensive punch came with an aging and injury-prone Demitra. You can pencil him in as the right wing on the Sedin line, but factor in these two items: The Canucks lose what secondary punch they had with Markus Naslund’s departure and they already play a tight defensive style. Things are looking down, not up, for Mr. Demitra.

We continue the 2008-09 RotoRob NHL Draft Kit today, as Steven discusses the top rookies you’ll need to keep an eye on this season. Steven Stamkos, C, Tampa Bay Lightning: Tampa’s first-round pick (first overall) is supposed to be NHL-ready, and he’s receiving particular praise for his shot and skating The Lightning are suddenly very […]

As an aside, it was remiss of me not to note in yesterday’s post that we were very saddened by the loss of Rick Wright, the long-time member of Pink Floyd. Okay…back to our regular programming. We’ve finished the cheat sheets for the 2008-09 RotoRob NHL Draft Kit, and now we’re into a series of […]

And the 2008-09 RotoRob NHL Draft Kit just keeps rolling, as today Steven checks in with his comprehensive list of the top 25 fantasy blueliners. 1. Nicklas Lidstrom, Detroit Red Wings: Sure, he’s playing with a Stanley Cup hangover. Sure he’s 38 years old. But there’s simply no other defenseman in the league who puts […]

Like an unstoppable force of nature, the 2008-09 RotoRob NHL Draft Kit contines unabated. Today, Mike regales us with his picks for the top fantasy netminders this season. Judging goaltending is a tricky task because so much of what makes a great fantasy goalie depends on a league’s specific statistics. For example, if you’re going […]