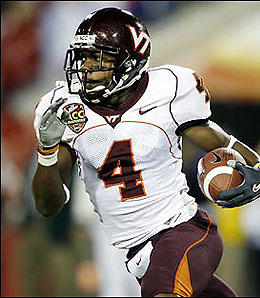 Chances are, you didn’t have former VT star Eddie Royal in your lineup in Week One; he wasn’t quite as studly in Week Two, but found the endzone again.

Week Two was a welcome change for wide outs. While Week One saw plenty of good producers, many weren’t in any starting fantasy line ups. We’re looking right at you, Eddie Royal and DeSean Jackson. This past slate of games, however, was different. And the torch bearer was Anquan Boldin, my pick for greatest human being ever on Earth (GHBEE) . He scored three times, pulled in 140 receiving yards, and I think delivered a baby on the way home from the game. Good stuff all around. But that’s in the rear view now, so let’s find some sneaky starts and surprising sits for all you pesky and voracious fantasy freaks.

Matt Hasselbeck, Seattle Seahawks (vs. Rams) – Honestly, I don’t even care who is playing the Rams. Every quarterback playing them every week will be a sneaky start. Yes, even Tyler Thigpen would qualify. I don’t even like Hasselbeck. He’s gimpy and the team brought back Koren Robinson and traded for Keary Colbert. I don’t think there’s a proper way to convey how desperate a team has to be to bring back Robinson, but I will say that even Chris Henry and the Bengals feel badly for them. But, at the end of the day, it’s the Rams. RotoRob could be started safely against them, and he only follows the CFL!

Jake Delhomme, Carolina Panthers (@ Vikings) – Two big keys to why Delhomme is worth starting consideration this week: Steve Smith is the obvious one. Delhomme has done an okay job with his depleted wide out corps, which isn’t a ringing endorsement, but it really could have been worse. The other big point to keep in mind is that Carolina is facing the Vikings, which means it can just give up on the run right now. The Vikings stymied Joseph Addai and really looked like the run stuffers of old. If the Panthers attempt more than 15 runs, they will lose. I’m stating it right now.

Larry Johnson, Kansas City Chiefs (@ Falcons) – Well, it’s the Falcons. And if you were dense enough to ignore our constant warnings about LJ over the last two seasons, you might as well start him here since it’s basically your last chance to. Enjoy it!

LenDale White, Tennessee Titans (vs. Texans) – In its only game this year, Houston allowed 4.7 yards per carry and three scores. The Titans’ top back is undoubtedly Chris Johnson, who will certainly get his and should be in every teams starting line up this week. White, however, will also get enough touches to be relevant. Don’t expect a huge yardage total, but he should get at least one cheap touchdown.

David Patten, New Orleans Saints (@ Broncos) – With Marques Colston out, Reggie Bush finished with the most catches and Robert Meachem scored the only touchdown through the air. The most telling stat, however, has to be targets (or looks) and Patten
won out. Sure, he only converted half of his looks into catches, but if he improves that just a tad, he could be a seven- or eight-catch for 80-to-100-yard wide out.

Mark Clayton, Baltimore Ravens (vs. Browns) – I’m not giving up on Clayton. The Browns defense couldn’t even hold the Steelers to under 185 passing yards while playing in Hurricane Ike. Assuming the winds stay under 50 miles per hour, Clayton and the Ravens should be in for a big game.

Good luck in Week Three and, as always, you can e-mail me any fantasy football questions.

By Andy Goldstein
This entry was posted on Friday, September 19th, 2008 at 9:24 am and is filed under Andy Goldstein, FOOTBALL, Prepare Thyself. You can follow any responses to this entry through the RSS 2.0 feed. You can leave a response, or trackback from your own site.