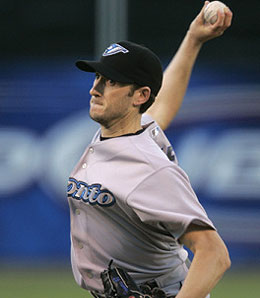 Josh Towers wasn’t horrific with the Jays last year, but he’s been firestarter for Colorado Springs this season.

Josh Towers wasn’t awful last year in his role as a swingman for the Jays, but he sure is sucking in his current capacity as a starter for the Triple-A Colorado Springs Sox. Through five starts, he’s showing his usual good control (five walks), but has also been touched up for five long balls. Towers was in contention for the fifth starter job in Colorado this spring, but don’t expect the Rox to come calling for the 31-year-old righty any time soon with those kinds of results.

Remember when Chris George was a prospect? The Royals first rounder (31st overall) back in 1998, George last appeared in the majors in 2004, and judging by how badly his game has deteriorated, he won’t be back any time soon. Pitching out of the Sky Sox pen (he’s not even good enough to be a Triple-A starter any more), George has been torched for a .390 BAA through 14 innings. The good news? He has yet to yield a long ball after coughing up 21 last season.

Matt Daley, another Colorado Springs reliever, looks like someone who could actually help the big league club at some point this year. He had a decent year as a swingman for Double-A Tulsa last season, but stepped up this year, earning a quick promotion to Triple-A, where he’s held his own for the most part, despite a couple of rough outings recently. Daley, a 2005 Sally League All-Star, has fanned 15 in 11 2/3 IP, the kind of dominance that gets noticed.

Another reliever I expected could help the Rockies this year was Juan Morillo. He’s had unsuccessful cups of coffee with the big league team the last two seasons, and put himself on the radar with a dominant showing in Double-A last year. However, Morillo’s control has completely gone AWOL in this, his first full year of Triple-A. While opponents are only batting .241 against him, and he’s striking out better than a batter per inning, Morillo has walked an ungodly 18 in just 8 2/3 innings. Things are looking a bit better for him over the last few outings, so perhaps he’s nipping this problem in the bud. Morillo will need to if he has aspirations of seeing any significant time in the bigs this summer.

Back in Spring Training, I wrote about Padre pitching prospect Wade LeBlanc and how his changeup had put him in the picture for the San Diego fifth starter job. Uh, yeah. Well, he’s been rancid at Triple-A Portland so far, and is clearly not adjusting to life at this level. LeBlanc, the team’s second rounder in 2006, has progressed through the system very quickly and is only 23, so there’s plenty of time for him to figure things out. But through his first five starts, he’s been shelled for 35 hits, five homers and 13 walks in just 22 1/3 IP. In particular, LeBlanc’s last two starts have been horrible, so perhaps he’s battling an injury. His flyball rate is up, and that’s not helping matters. This kid has talent, his track record is strong, and he was very solid in 2007 at both High-A and Double-A, so keep an eye on him.

OF Sean Barker, who made his MLB debut last year for Colorado, continues to put up consistently strong numbers in this, his third year of Triple-A, as mostly a part-time player. A six-game hit streak has him up to .291 for the year, with 20 RBI in 24 games. More promising still, after walking 14 times in 72 games last season, Barker has already drawn 10 free passes this year, a newfound skill that should help put him in line for a call up should injury to one of the Rockies’ outfielders necessitate an extra flyhawk at Coors. Barker, the team’s sixth rounder in 2002, will be 28 next month, so the best we can probably hope for is he carves out a career as a fourth or fifth outfielder.

Remember Enrique Gonzalez? The D-Backs’ fifth starter in 2006, who got all of one start last year with the Snakes after a less than impressive year at Triple-A? Me thinks that Arizona gave up on the still-just-25-year-old too soon. He was waived, and claimed by the Nats in September, but they never brought him up, and in February, San Diego claimed him. Gonzalez made the team out of Spring Training, but was outrighted a couple of weeks ago after starting poorly. Since moving to Portland, Gonzalez was strong in a couple of relief appearances and decent in his only start. But with 13 strikeouts in just seven innings, it’s clear that Gonzalez could be an asset in the Padres’ pen at some point. I’d keep an eye on him.

Former Diamondback prospect Adam Bass is getting roughed up something fierce in the Portland Beaver bullpen. Bass, a 10th round pick by the D-Backs in 2003, was excellent at Triple-A Tucson last year, garnering attention from the Rakuten Golden Eagles of the NPB, if not Arizona. He spent the rest of the season in Japan, but was hammered for 30 hits in 15 1/3 IP. Now, he’s back in Triple-A, and appears no closer to getting to the majors. He’s pitched a bit better his last couple of times out, but has been ripped for 20 hits and six walks in just 12 2/3 IP over 10 appearances. The 26-year-old righty will need to show marked improvement if he’s hoping to make his big league debut this year.

By RotoRob
This entry was posted on Wednesday, April 30th, 2008 at 8:38 pm and is filed under BASEBALL, Minor Matters, RotoRob. You can follow any responses to this entry through the RSS 2.0 feed. You can skip to the end and leave a response. Pinging is currently not allowed.