Dear RotoRob: Is Bargnani Worth Targetting? 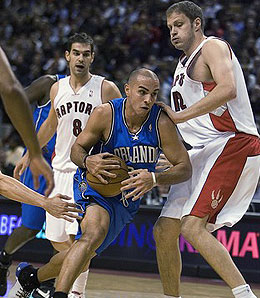 Rasho Nesterovic, right, isn’t the long-term solution at centre for the Raps, but that doesn’t automatically mean Andrea Bargnani is, either. (Frank Gunn, Associated Press)

Let us switch gears here. I am looking at guys from other teams right now that haven’t played to their potential (at least in my mind) to maybe try to pry them away from a few owners. One guy I am targeting is Andrea Bargnani.

What do you think of his progress going forward?

I think this was the season he was supposed to do it and he didn’t. Rasho Nesterovic (who has an $8.4 million player option for next year) is 33 years old next month and Bargnani is 23 right now, so I think Bargnani is still the Raps’ idea of the centre of the future for them, but he is looking a lot like a 10-11 point/3-4 rebound guy to me. Maybe he steps up his play and gets better, but I think of him more as Darko Milicic (except with more points and less rebounds and blocks) than Zydrunas Ilgauskas. But the similarities (young, European big man who has yet to approach his lofty expectations) are striking. Obviously, Bargnani has a ways to go before he really is the next Dirk Nowitzki.

I have no doubt that Bargnani will get better – remember how long it takes big men to develop — but it doesn’t look like he will get a lot better than he is right now. Did he simply slump all year, or is he just a bust? It’s too soon to tell.

Some guys to look at next year are Francisco Garcia, Jason Maxiell, Devin Harris if you can get him, Ramon Sessions and/or Chris Quinn. Bargnani is the popular pick for people because he is the name, but I think what you see is what you get with him and if you are happy with a centre that nets you the rebounds of a PG, then go for it.

By RotoRob
This entry was posted on Tuesday, April 29th, 2008 at 2:31 pm and is filed under BASKETBALL, Dear RotoRob, RotoRob. You can follow any responses to this entry through the RSS 2.0 feed. You can skip to the end and leave a response. Pinging is currently not allowed.