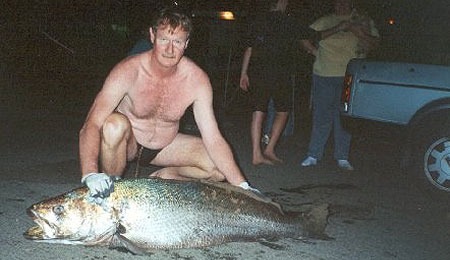 Andy would rather fondle a large stinky dead fish than listen to people bad mouth bloggers.

Readers of RotoRob may or may not know, but I actually have some experience in “old” forms of media as well as the newer ones. While I’ve written for this here fancy blog for a couple years, I also have written for a fantasy football magazine, and will be doing so again this year. Some of you guys might be holdovers from when Derek and I podcasted weekly during the football season. You may not know that I was, briefly, employed by a sports talk radio station in the Dallas/Fort Worth metroplex.

I bring this up due to the blow-up on HBO’s Costas Now featuring Deadspin’s Will Leitch and Buzz Bissinger, who penned such classics as Friday Night Lights…and…Friday Night Lights! I could attempt to describe what happened, but it’s easier to just watch the clips.

Plenty of bloggers have responded. Some thoughtfully. Some hysterically. I can’t really add anything to other than a personal moment that I was reminded of while watching Bissinger curse up a storm. Obviously, my story can’t compare to being called “full of shit” on premium cable, but I think some of the themes are similar.

At the radio station, I was part of a new show centred on fantasy football. As one might imagine, the idea of a radio show about fantasy football ruffled some feathers. Once the idea was put forth, a number of more tenured members of the station were visibly upset and clearly tried to “talk some sense” into the boss. For the record, I was amazed that we were getting a time slot. That’s not because we weren’t going to succeed. I’m sure we would have. But we were still new to the station and the boss had no idea whether we were talented or “full of shit” ourselves.

Anyway, we were scheduled to do some cross-promotion on other shows during the day. That sounded good to me and we first appeared during the afternoon drive show.

“So Andy, explain to me how fantasy sports and fantasy football aren’t ruining the fan experience.”

“Thanks for having us, it’s great to be he- wait…what?”

Basically, instead of some time for us to develop a relationship with an audience and establish ourselves as knowledgeable voices in the world of fantasy football, we were turned into defense lawyers. Old Media v. Internet-fueled Development. Sure fantasy sports isn’t exactly the same as sports blogs, but in the venn diagram of things old sports writers are afraid of, and therefore hate, they share some bubble space.

I was floored. I have defended fantasy sports to family members, friends, and even while calling into other sports talk stations, but this was an ambush and I’m sure I didn’t exactly make the best counter-arguments. In this area, I feel for Leitch. He went on knowing he probably should be on his heels, but he couldn’t prepare for venomous, nonsensical rhetorical questions.

The last laugh, obviously, stands with the new media. It always does. Sooner or later, the Buzz Bissingers and Bob Costases of the world will be media members who started off blogging or podcasting. And what blogger would actually attack blogging?

Okay, the revolution might take a little bit longer than expected. But chances are, it won’t be televised.

By Andy Goldstein
This entry was posted on Thursday, May 1st, 2008 at 10:19 am and is filed under Andy Goldstein, Misc.. You can follow any responses to this entry through the RSS 2.0 feed. Both comments and pings are currently closed.