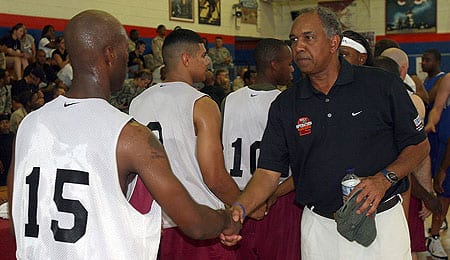 Turning around the Golden Gopher program is another feather in the cap of Tubby Smith.

The Golden Gophers are off to a 4-0 start, tied for first in the Big Ten, and that got me thinking…not enough is written about what a genius Tubby Smith is. After great runs at Tulsa, Georgia and Kentucky (where he guided the Wildcats to an NCAA title in 1998), Smith has taken his act to Minnesota and completely turned around the Golden Gophers program. This team was 8-22 the season before Smith arrived and has gone 20-14, 22-11 and 21-14 in the three seasons since. It’s unbelievable what a difference a fantastic coach can make in college hoops. Unbelievable.

Of course, if Minnesota wants to take it to the next level, it’s going to have to topple Big Ten rival Ohio State, currently ranked fifth in the country. On Saturday, the Buckeyes completely dismantled UNC-Wilmington, 81-41. OSU coach Thad Motta has a hell of a freshman class on his hands, including PF Jared Sullinger, who’s a beast in the post, reminiscent of Al Jefferson. After going for double-doubles in each of the first two games of the season, Sullinger wasn’t needed much in Saturday’s blowout, so he “only” had 11 points and eight boards. But make no mistake – you’re going to be hearing a lot about this kid as the road to March Madness unfolds.

Eighth-seeded North Carolina was upset by Vanderbilt 72-65 on Sunday, so those people that have been moaning that the Tar Heels are ranked too high are going to get their wish. UNC freshman small forward Harrison Barnes, the projected top pick in next year’s NBA draft, recovered somewhat from the 0-for-12 stinker he put up Friday night. On Sunday, Barnes managed a 4-for-12 shooting performance for 11 points with two assists, two steals and a block, but he pulled down just four boards and for the third time in four games failed to connect from beyond the arc. In the past two games – both Tar Heel losses – Barnes’s shooting touch hasn’t come close to what he did in the first two games of the season. But he’s athletic, and his size will make him a tough man to defend at the three, making the Grant Hill comparison sound very tantalizing indeed.

The 17th-ranked Baylor Bears set a school record for wins last season and are off to a 3-0 start this year thanks in no small part to another highly-touted freshman forward – Perry Jones. An athletic 6’11” kid that’s projected to play the three in the NBA? Can you say mismatch? Jones, who is averaging 14.3 points, a team-high nine boards and two blocks per game, has been compared to Tracy McGrady. Let’s hope that he’s a less fragile version of T-Mac.

Still with the Big 12, after a nice improvement last season that got the team to nearly .500, Colorado has dropped two of its first three this season and currently sits in the conference cellar after suffering a very tough overtime loss to San Francisco on Saturday. But don’t blame sophomore shooting guard Alec Burks. He went off for a season-high 29 points, giving him at least 20 points in every game so far. He’s not getting as many steals as he did in his freshman year and he has yet to block on shot this season, but Burks is sure filling up the bucket for the Buffaloes. And just wait until his three-point stroke returns (he’s only 2-for-9 this season after nailing 19-of-54 last year). He’s a very good ball handler and with his athleticism, the sky’s the limit for Burks, who has been compared to Eddie Jones.

Of course, the top-ranked team in the country is currently…sigh…the defending champion Duke Blue Devils. Duke also features a star freshman – point guard Kyrie Irving, a super fast dude with great passing skills that’s been drawing comparisons to a former ACC PG great – Chris Paul. Can Duke really repeat with a freshman running the offense? Irving sure doesn’t look like a rookie so far, as he’s averaging 6.7 APG while only turning it over once per game. Oh, and Irving can shoot it a little, too. He’s canned 52.2 per cent of his field goal attempts, 53.8 per cent from long distance and 92.3 per cent from the line. Swish! Only backcourt mate Nolan Smith is scoring more than Irving on the Blue Devils.

Over in the SEC, Tubby’s old school is still faring well without him as Kentucky is currently ranked 13th in the nation, despite the fact that its big freshman, Enes Kanter, has been ruled ineligible (a decision the team is trying to appeal). The Wildcats (2-0) take on undefeated Oklahoma on Monday night, so one of these teams is going to be suffering its first loss of the young season. Of course, the Wildcats have another pretty darned good freshman in small forward Terrence Jones. All he did in his first NCAA game was score 25 points, pull down 12 boards, nail a pair of treys and add three steals, two blocks and two assists. Talk about filling up the stat sheet. Jones’s second game didn’t go quite as well, thanks to some foul trouble, but he still blocked another couple of shots and had 12 points, five boards and three assists. About the only chink in his armour so far has been some awful free throw shooting as Jones has buried just 5-of-15 from the charity stripe. This Portland native could be the next Lamar Odom.