Minor Matters: Wooten it be Nice? 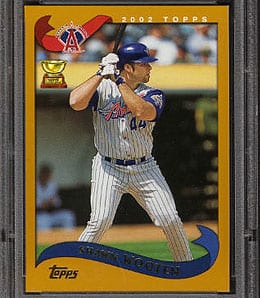 Shawn Wooten is back in the game as a minor league hitting coach.

Remember Shawn Wooten? After flaming out as a major league infielder/catcher, he went to the Independent American Association very briefly and then bounced around the Met and Padre organizations in 2007 and 2008 before retiring.

The Padre organization has hired Wooten to be the hitting coach at low-A Eugene of the Midwest League.

This is the first coaching position for the 37-year-old, and let’s hope the Emeralds don’t follow Wooten’s major league example of gradual degradation. His year-by-year OPS in six big league seasons (the first four with the Angels, the last two with Philly and Boston): 1223, 798, 773, 652, 454, 0.

Notice a pattern there?

Still, Wooten brings championship experience to Eugene, having won a ring with the Halos in 2002. And it’s not as if he was merely a passenger on that team – Wooten hit .474 in the postseason, the third-highest mark that year. The only dinger he hit in the playoffs during that run came in the deciding game in the ALDS against the Yankees.

Now that’s one for trophy case.

By RotoRob
Tags: Shawn Wooten
Posted in BASEBALL, Minor Matters, RotoRob | Comments Off on Minor Matters: Wooten it be Nice?