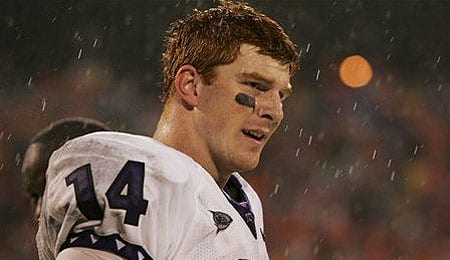 With Cedric Benson out, the Bengals will lean on rookie QB Andy Dalton.

A new era has dawned in the long and (mostly) distinguished history of the Wire Troll, as we finally gird our loins, lace up the high tops, snap on the chinstrap and trot confidently onto that hallowed field of battle that is the National Football League. For years, the RotoRob faithful have sought the Troll’s guidance in waiver-worthy matters relating to the hardwood, the frozen pond and the fields of dreams… but sadly had to depart our company when the autumn wind began to howl and Fantasy thoughts shifted from Wrigley and Fenway to Lambeau and Soldier Field. Those days are gone, though, and the Troll will be here for you throughout the NFL season, bringing you the top waiver wire pickups of the week — along with our signature side shake of pop culture and random chicanery, of course.

This edition of the Troll is running a day or so late, as I’ve just returned from a long foray into the great Midwest. The Troll is not fond of hurtling through the air at 500 mph in a pressurized metal tube, and the fact that I was nursing a cold and flying with roughly 135 toddlers who all seemed to be teething simultaneously didn’t make it any better. Happily, a loquacious young lady who happened to be sitting next to me drowned out the toddlers’ wailing; while chatty neighbors are seldom good news (think Planes, Trains and Automobiles), in this case my row-mate was a devout Chicago sports fan that knew her teams and knew them well. Rather quick with the wit, too: I told her I was in media, and she took one look at my swarthy visage and remarked, “radio or print?” All things considered, it was one of the more pleasant flights I’ve experienced recently, and I wish I had been in better health to enjoy it.

We’ll be coming to you on Wednesdays from here on out, but of course you can still keep up with the latest waiver-wire worthy news by following the Wire Troll on Twitter.

Andy Dalton, Cincinnati Bengals: The Troll has long had a soft spot in his heart… and head… and wallet… for redheads, so it’s only natural that he would eagerly go all-in on the rookie passer with the blaze orange buzz-cut. Through two games, Dalton has thrown for 413 yards and three touchdowns without a pick, and his performance has the Queen City abuzz with talk of a potential return to respectability for the Bengals in 2011. That’s big talk for a franchise that has finished above .500 only twice in the past 21 seasons, but hey, if there’s one thing redheads are good at, it’s inspiring crazy talk — and crazier deeds. If you’re in a deeper (more than 12 team) league, or play in a two-quarterback format, Dalton is well worth adding to your roster. Bear in mind, however, that with star running back Cedric Benson expected to miss the next three games, Cincy’s passing game could be exposed. This will be an early baptism by fire for the rookie QB.

Thomas Jones, Kansas City Chiefs: With Jamaal Charles out for the season, there are plenty of Fantasy points available for the taking in the Chiefs’ offense. Jones is 33 years old, but he is still a serviceable runner between the tackles, and — more importantly — at the goal line. He can’t carry a full load any longer, but Jones figures to be the top scoring option in the Chiefs’ backfield by committee.

Daniel Thomas, Miami Dolphins: So, it turns out that Reggie Bush can’t be a feature back after all… who knew? Well, everyone, actually, and after rushing for 107 yards in his season debut in Week Two it appears as though Thomas is ready to step in for the ‘Fins as the go-to back. The 228-pounder toted the rock 325 times for Kansas State back in 2010, so he’s certainly equipped to handle a full complement of carries at the professional level. Bush will still be around to work the edges and catch the passes, which will hurt Thomas’ value in PPR formats, but the rookie could be the Miami bell cow for the remainder of the season. Grab him immediately if he’s available in your league.

Dexter McCluster, Kansas City Chiefs: McCluster also carries eligibility at wide receiver in most leagues, and he figures to see a fairly heavy workload as the Chiefs try to replace Charles. McCluster is undersized but quick, and he’ll be a nice complement to Jones’ north-south style. Look for McCluster to see about 12-to-15 touches per game, and while he doesn’t figure to see much work at the goal line, his ability as a receiver may give him the nod over Jones in PPR formats.

Eric Decker, Denver Broncos: The Broncs are hurting at wideout right now, with starter Eddie Royal sidelined 2-to-4 weeks with a groin injury and top target Brandon Lloyd returning to the field after missing Week Two with a groinie of his own. Ouch. Enter Eric Decker, who racked up 113 receiving yards and scored twice in Week Two. He has good size, solid hands and runs decent routes, and those attributes could make him a regular target in the red zone if opposing defenses key too much on Lloyd. Don’t set the bar too high this week — the Titans are a tough group against the pass — but Decker can still be deployed as a flex option in most leagues.

Denarius Moore, Oakland Raiders: Moore exploded for 146 yards and a touchdown in Week Two, and that performance has catapulted him to the top shelf of Oakland’s battered wideout ranks. Moore ran a ho-hum 4.45 40-yard dash at the 2011 NFL Combine, but he clocked a 4.37 at Tennessee’s Pro Day. That speed makes him a legitimate deep threat, and we all know that the Raiders love to air it out. Oakland draws the Jets this week, so the match-up isn’t ideal, but Moore is worth a flier — especially in leagues that reward long-distance touchdowns.

David Nelson, Buffalo Bills: Buffalo quarterback Ryan Fitzpatrick is tied for the league lead with seven touchdown passes. Yes, you read that correctly: Ryan Fitzpatrick leads the league in TD passes — and Nelson’s 12-149-1 line through two games is winning him notice in deeper Fantasy leagues. The 6-foot-5 wideout should see even more targets now that Roscoe Parrish has been placed on injured reserve, and he could become a valuable go-to option in the red zone as opposing teams try to take away budding star Stevie Johnson.

Fred Davis, Washington Redskins: Davis has taken advantage of Chris Cooley’s recovery from offseason knee surgery to assert himself as Washington’s top receiving option through the first two weeks of the season. Though he has not yet been named the starter, Davis’ 11-191-1 line thus far makes a strong case that he should be the top man on the depth chart. Cooley should become more of a factor as he works himself back into game shape, but for now Davis is clearly the tight end to own in Washington — and he should be starting in most Fantasy formats.

John Kasay, New Orleans Saints: It seems like Kasay has been kicking since the Paleozoic Era, but in fact the veteran booter knocked home his first field goal on September 1, 1991 — roughly four months after Cam Newton’s second birthday. Kasay’s no spring chicken, but the 53-yarder he hoisted home last Sunday will win him Fantasy favour regardless of how many gray hairs he may be sporting under his helmet. Starter Garrett Hartley is not expected back until at least Week Five, so until then Kasay is a must-start while he’s kicking for the explosive Saints’ offense.

Desmond Bishop, LB, Green Bay Packers: The Troll is proud to say that he bought big on Bishop this season, and now that he has racked up 22 total tackles and one sack through his first two outings it’s time you get on board this train. Clay Matthews gets all the headlines and highlight reels, but Bishop has a tremendous knack for finding his way to the ball carrier — and announcing his presence with authority when he arrives. He is available in about 75 per cent of Yahoo! leagues, and makes a worthy waiver-wire investment in all IDP formats.

Jon McGraw, S, Kansas City Chiefs: The Chiefs lost uber-safety Eric Berry in Week One, but Quick-Draw McGraw has stepped up with 18 total tackles, one interception and three passes defended in the first two games. McGraw is a veteran who lacks a high ceiling, but the Chiefs’ defense figures to be on the field a lot the rest of the way, opening up opportunities for some hefty tackle numbers. McGraw is best suited for very deep IDP leagues, but he’s certainly worth a look if you need some depth at defensive back.

Sean Lee, LB, Dallas Cowboys: Lee has supplanted Keith Brooking as the starting left inside linebacker in Big D, and the second-year man is piling up tackles at a furious rate. Through two games, Lee has 23 total tackles, an interception, a fumble recovery and two pass defenses, and the Troll believes that he’s on the verge of a breakout season. Get in on this one early, gang.

That’s not to suggest the series has gone backward (or even sideways), it’s just that the majority of the enhancements are more subtle, behind-the-scenes type of stuff, the biggest of which is the collision-based tackling system. Designed to eliminate players suctioning onto one another in tackling situations, the system keeps you in control of a player until contact is initiated. At that point the game takes into account things like size and momentum to determine what happens next. It makes for smoother, more realistic looking tackles (even if there’s a proclivity for big hits).