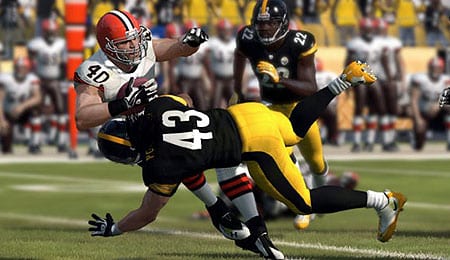 Tackling animations in Madden NFL ’12 are the best in the series’ history.

It was a tumultuous offseason for the National Football League, punctuated by a lengthy stalemate between owners and players that threatened the very existence of a 2011 season. Thankfully, disaster was averted when the two sides came to an agreement in late July, which allows the upcoming release of EA Sports’ Madden NFL ’12 to be the precursor to another season rather than a bittersweet reminder of what we were missing. So now just one question remains: are you ready for some football?

Last year’s game introduced some substantive changes to Madden’s controls. Most notable among them were the removal of turbo and the altering of the right analog stick’s functionality, which went from unleashing jukes and shoulder charges to more subtle body shifting. This year there are some small tweaks (receiver-specific pump fakes) and the switch to a collision-based tackling system affects how some things are handled (the dive button now doubles as a “tackling button”), but overall it maintains the status quo.

Perhaps the most noticeable change from ’11 to ’12 is the improvement in the game’s visual presentation. Collision-based tackling has severely decreased the tractor beam effect of bringing two players together that gamers have become accustomed to, and the resulting smorgasbord of tackles is quite enjoyable. Dynamic lighting, revamped camera angles and beautifully recreated NFL stadiums also do their part in making Madden ’12 a truly excellent looking football game.

That being said, there are still some graphical missteps. For starters, players with long hair (think Clay Matthews or A.J. Hawk) look as though they’ve had a horse tail pinned to their helmets. There’s also a strange sense of emptiness to the post-game scenes as the field is too sparsely populated — and given what a nice job the game does in mimicking other aspects of an NFL broadcast it’s a bit jarring.

Far more damaging to Madden ’12’s broadcast feel, however, is the commentary. Gus Johnson and Cris Collinsworth never hit their stride this year with lowlights including calling teams and players by the wrong names (the Titans are from New York?) and some bizarre sound mixing issues that lead to unnatural changes in both volume and tone. The soundtrack and in-game effects are strong, but once again commentary is the area of the game that could benefit most from a significant overhaul.

It’s in the nature of a sports game’s shortened development cycle that some years will bring significant additions or alterations while others offer more incremental improvements. In Madden NFL ’12, gamers can look forward to the latter as none of the game’s new features substantially alter the way the title played last year.

That’s not to suggest the series has gone backward (or even sideways), it’s just that the majority of the enhancements are more subtle, behind-the-scenes type of stuff, the biggest of which is the collision-based tackling system. Designed to eliminate players suctioning onto one another in tackling situations, the system keeps you in control of a player until contact is initiated. At that point the game takes into account things like size and momentum to determine what happens next. It makes for smoother, more realistic looking tackles (even if there’s a proclivity for big hits).

Defensive A.I. has been sharpened for zone coverage, and while it’s still not perfect there is a clear difference between previous versions and this one. Unfortunately, the passing game also houses a couple of Madden’s more annoying issues. First, the skating animations that have been cleaned up so effectively in other aspects still appear here with defensive backs essentially warping around receivers unrealistically to intercept passes they have no business even deflecting. Also, linebackers have absurd vertical leaps, making passing over their heads a frustratingly futile endeavor.

Meanwhile, the running game responds well to the collision-based system as it seems to be relying more than ever on properly reading blocks and attacking open lanes. EA Tiburon’s removal of the juke/truck stick last year started things down a more realistic path, and I’m happy to say there’s even less of an “arcadey” feel this time around.

EA’s other significant gameplay addition this year is dynamic player performance, which affects player ratings based on their play during a game. For instance, if you’re controlling Chad Henne and toss a couple of early picks, his confidence will be shaken and he won’t perform as well. To combat that you’ll need to try to get him some easy completions to build him back up. This works across the spectrum of positions as well — watch an aggressive corner that gets burned a few times start playing more passively in coverage or a receiver get a case of the “dropsies.”

It’s an ambitious addition that is based on a lot of different factors, most notably consistency and confidence. It works well. In fact, it might work a little too well as at this juncture it seems as though players can get excessively hot and cold too easily. Even if there are a few kinks to work out, it still rates as a quality addition with a lot of enticing potential down the road.

After doing little to beef up either the Franchise or Superstar modes last year, EA has rolled out quite a few new features for Franchise mode, arguably the coolest of which is that dynamic player performance carries over here and allows for extended slumps and hot streaks as one week bleeds into another. The game also assigns player roles based on specific criteria (such as “QB of the Future” or “Shutdown Corner”), and these help determine which direction the teams chooses to go for things like the draft and free agency.

There are also new scouting and free-agent bidding systems in place. Scouting still feels limited in the number of players you can actually observe, though I like that locations (combine, pro days and individual workouts) yield different information. I’m not a fan of the overhauled free-agent bidding, which creates an eBay-esque free-for-all where whoever makes the highest offer gets the player. It’s more dynamic than previous takes on the process, but it’s unrealistic and effectively removes every criterion other than dollars from contract negotiations.

Expanded rosters and staggered cut down days are also new. It’s kind of cool to have all these extra players around, but the way the game handles preseason tilts is broken. Instead of your third or fourth safety on the field in the second half you end up with a starting receiver in that spot since the computer basically inverts the depth chart. It’s wholly unrealistic and potentially dangerous to your squad if your No. 1 receiver is injured playing defensive back in the third week of the preseason.

Superstar mode has received some modest tweaks in regards to player progression, and you’ll now earn points to boost your ratings both during games and practices. Unfortunately, this is pretty dull, and there’s no real goal to work toward. Unlike NCAA Football ’12 you don’t gain trust or even move up the depth chart. Instead I was made the starting quarterback on Day One despite having lower ratings than everyone else there, and when I tossed three picks in a Week Two, I didn’t get benched. It’s better than last year’s version, but it still has a ways to go.

Online play is solid as usual, and EA has added some bells and whistles to Online Franchise. The big news from the online front, though, is the addition of communities. These should help shepherd like-minded individuals into better matchups with gamers that want to play the same style of football (read: FG block is not a legitimate defensive call on third and four). Madden Ultimate Team, the card-based sub-game, also returns with the added ability to trade cards.

All the new features come together to once again elevate the core experience of Madden NFL ’12 above its predecessor. As always, it makes some concessions to keep things fast paced and fun, but as a whole it offers a tighter, more realistic version of the NFL game than Madden ’11.

NFL football returns in regular season form next Thursday, and thanks to the good people at EA Sports we’ve got a sealed PlayStation 3 copy of Madden NFL ’12 to give away in celebration of this glorious event!

To enter, simply post a comment on here telling us which team you think will win Super Bowl XLVI (hint: Packers). When posting please include your @Twitter name if you have one. If not, just verify your email address is correct when entering.

Winner will be selected at random on Friday, Sept. 2. All entries must be received by Friday at 5 PM EST/2 PM PST. Please note that although anyone can enter you must be following me on Twitter or submit a working email address so that you can be contacted.

By HC Green
Tags: National Football League
This entry was posted on Monday, August 29th, 2011 at 11:57 am and is filed under FOOTBALL, Herija Green, Video Game Reviews. You can follow any responses to this entry through the RSS 2.0 feed. Both comments and pings are currently closed.