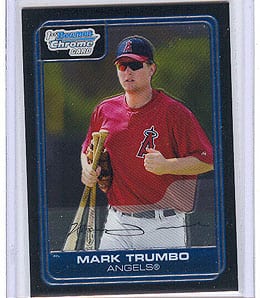 Mark Trumbo is a possible replacement for Kendrys Morales, the victim of over celebration.

Watching the mob mentality going on around home plate after walk-off homer celebrations, I’ve often wondered how long it would be before someone other than Tagg Bozied did some serious damage. And sure enough, on Saturday in this festive pogo stick hopping rampage, it was Kendrys Morales who became the victim. The picture of Morales on the ground with his leg bent in the wrong direction is not a pretty one, folks, and this is a huge loss to the Angels as they try to keep pace with both the Rangers and Athletics in a suddenkly tough American League West Division. I’m not against celebrating, but let’s face it, this wasn’t Game Seven of the World Series and it’s just about time to cut this crap out of the game before someone else gets seriously hurt.

In brighter news, congratulations are in order for Roy “Doc” Halladay of the Phillies for becoming the 20th pitcher (and second this season) in MLB history to record a perfect game. With the Phillies’ offense locked into freefall right now it took a pitching gem of this magnitude to secure a 1-0 victory over the Marlins Saturday night. Congratulations, Doc, on your historic accomplishment.

Now that we’ve got the news of the day out of the way let’s move onwards and upwards and give some of the current waiver wire options the once over.

Mark Trumbo, 1B, Los Angeles Angels: As the result of the aforementioned celebrations Saturday, the Angels are going have a vacancy at first base for the next 12 weeks. A quick scan of their minor league system leads us to Trumbo. The 24-year-old is currently hitting .275 BA with 11 homers and 40 RBI in 182 at-bats at Triple-A Salt Lake. He is still a work in progress as he does struggle against southpaws, but is probably the best current internal option to replace the injured Morales unless the Halos plan to use Robb Quinlan or move outfielder Juan Rivera to first base. Taking an early plunge on Trumbo might prove to be a worthwhile endeavour in AL-only leagues.

Buster Posey, C, San Francisco Giants: The moment of truth and the much vaunted arrival of the “chosen” one has finally come in the city by the bay. Posey has been promoted and the struggling Giant offense needs his bat in the worst of ways. At Triple-A Fresno, he managed to smack six homers with 32 RBI while amassing a stellar .349 BA in 172 at-bats. Temper your expectations from a long ball perspective, but Posey will smack line drives all over the field for the Giants. In his 2010 debut Saturday against the D-Backs, he went 3-for-4 with three RBI. If Posey is currently available in your league, grab him quick and enjoy the ride.

Carlos Monasterios, SP, Los Angeles Dodgers: The Dodgers have turned to 24-year-old Monasterios to fill out their rotation after finally throwing in the towel and designating Ramon Ortiz for assignment Thursday. Monasterios picked up the win Friday against the Rockies, scattering five hits with one walk over five IP in a very effective outing. The Rule Five pick hasn’t looked over-matched so far, making him a decent gamble in NL-only formats.

Will Ohman, RP, Baltimore Orioles: Desperate times require desperate measures and Oriole relievers continue to drop like flies. Mike Gonzalez, Jim Johnson, Alfredo Simon and Koji Uehara are all currently holding down spots on the DL and in a nearly last man standing scenario, the O’s have turned to Ohman. In 15 2/3 IP, Ohman has struck out 17 and has yet to allow a run scored. Does he keep the job after Simon returns? Probably not, but if you’re in the market for a sprinkling of saves over the next several weeks grab Ohman and take what you can get until Simon comes back.

Max Scherzer, SP, Detroit Tigers: Mad Max returns Sunday from exile to face the A’s. In two starts for the Toledo Mudhens, the 25-year-old racked up some rather mind-boggling numbers: 15 IP, four hits and two walks allowed to go along with 17 strikeouts and a pair of victories. There is nothing left to prove at Triple-A for Scherzer. Get him rostered in all formats, but keep him on the bench in standard mixed formats until he can prove he can convert his recent minor league success to the big leagues.

Edwin Encarnacion, 3B, Toronto Blue Jays: Encarnacion is the perfect example of the all-or-nothing mentality currently being displayed by so many Blue Jays. The power will be there, but so will the abysmal batting average. Since returning from the DL in mid-May, Encarnacion has mashed six homers (half of those in one game) and driven in 13 runs while batting just .250 BA. He is a fine acquisition in AL-only formats as long as you fully realize that his power comes with a price.

Randall Delgado, SP, Atlanta Braves: Here’s a name that should be noted for those of you playing in deep dynasty formats. Delgado, who only turned 20 back in February, is enjoying a huge campaign in High-A ball. In 59 1/3 IP for the Myrtle Beach Pelicans, he has allowed only 44 hits and 12 walks while racking up 68 strikeouts. A promotion to Double-A Mississippi (where he’ll team with the Braves’ top pitching prospect, Mike Minor, who is putting up the Ks like nobody’s business) is probably not that far down the road and he’s certainly a name to remember for the future.

John Axford, RP, Milwaukee Brewers: The Carlos Villanueva experiment appears to have drawn to a close for the Brewers. In eight innings since being recalled from Triple-A Nashville in mid-May, Axford has allowed just four hits while walking four and fanning 13 and has now assumed the closer role, getting saves in his last two opportunities. Get him rostered in all formats, but realize veteran Trevor Hoffman is more than likely to get the shot to resume his role as closer at some point.

Chris Tillman, SP, Baltimore Orioles: In his debut against the Jays Saturday, Tillman worked a very effective 5 2/3 IP, allowing six hits with two walks and three strikeouts in a no-decision. Get him rostered in AL-only leagues if he’s available still, meaning you didn’t listen to us the first time around, but note that with some rather formidable offenses in the AL East, spot starting him would be the prudent approach.

Mike Sweeney, 1B, Seattle Mariners: What is truly more amazing — the fact that Sweeney has five homers, 12 RBI and a .389 BA over his past ten games, or that he has avoided the DL thus far in 2010? Apparently, all it took was a scolding by RotoRob to get him going, so go ahead and take the plunge in AL-only leagues and get those counting statistics before his eventual DL stint.

Jonathan Lucroy, C, Milwaukee Brewers: The catcher of the future for the Brewers (now that he’s passed the mentally unstable Angel Salome, who has gone to pieces since his wife had a baby — what’s up with that?) has arrived a bit early as a result of a torn labrum suffered by veteran Gregg Zaun. Last season, the 23-year-old Lucroy managed nine homers with 66 RBI and a respectable .267 BA at Double-A Huntsville. The top prospect is currently slated to back up the underwhelming George Kottaras, so there’s potential he’ll steal at-bats if he proves he can handle big league pitching. Get Lucroy rostered in NL-only formats and follow his progress closely over the next several weeks.

Jeremy Hellickson, SP, Tampa Bay: The 23-year-old wunderkind is pitching lights out at Triple-A Durham. Hellickson is currently sporting a 7-2 won-loss record with a 2.79 ERA. In 58 IP, he has allowed 53 hits and is flashing his usual brilliant command with just 12 walks against 60 Ks. In Hellickson’s last start, he tossed an eight-inning one-hitter against Pawtucket. Clearly, there’s nothing left to prove down on the farm so even with the deep rotation in Tampa, expect him to get a call sooner rather than later. Hellickson will likely pitch out of the pen initially (unless an injury opens up a rotation spot in the interim), but his talent is such that he should be owned in AL-only and deeper formats at this time. Remember the impact Neftali Feliz had last year? Hellickson could provide a similar spark.