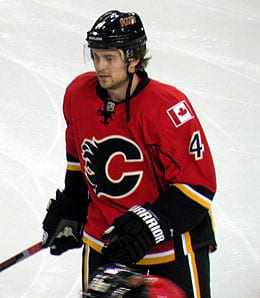 Heading into Week 18, there is the outdoor game in the Bronx to investigate along with a heavy Saturday schedule because of the Super Bowl. Please note that some teams finally are playing a bit more of a manageable schedule so there may be less of those four games in six nights scenarios. Let’s take a look at some different pickups for this week’s “defensive” installment of The Wire Troll.

Kris Russell, D, Calgary Flames: At the expense of Dennis Wideman came the return of Russell (knee), who is someone we haven’t recommended in nearly three years. While he is no Erik Karlsson, Russell averages about a point every other game and has already potted four goals, including a beauty for his first of the season back in late-October (see video below). Deceptively the Calgary defenseman finds ways to be useful in multiple categories whether it is ATOI, blocks, or even power play points. He is owned in less than 20 per cent of all leagues and if you can snatch him off the waiver wire, then you should do so.

Lubomir Visnovsky, D, New York Islanders: Finally it appears that Visnovsky will be ready by Monday or Wednesday and that is truly a joyous occasion for any Fantasy hockey owner. It seemed forever and a day ago that the power play quarterback left the lineup with a concussion. In all, 46 games have been missed but this could be a big pickup, especially when you consider injuries to key defensemen seem to always be popping up of late. In the final 25 games or so, an offense that features a first line including John Tavares and Kyle Okposo can use that quarterback for even greater success, especially on man advantage and four-on-four situations. Visnovsky’s ownership rate is more than low enough.

Tom Gilbert, D, Florida Panthers: Hey, assists are always valuable. The bonus is that Gilbert has been able to adapt well in Florida as he has been unusually proficient in the last week, tallying five points in his last four games. Toss in an average of almost 1.2 shots and 1.3 blocks per game, which is not great, but serviceable. In deeper leagues, Gilbert is occasionally paired with Brian Campbell and that means the chance for some PP1 time. Any help is good help with a 15-to-25 per cent ownership rate, that means Gilbert is probably out there for the pickings.

Olli Maatta, D, Pittsburgh Penguins: Single digit ownership rates should be a thing of the past soon for Maatta who has been very warm for the Penguins with 14 points in his last 22 games. He may only be 19 but his talent and upside cannot be disputed. The way he’s taking advantage of injuries with a veteran like poise has caused many in Pittsburgh to think he may be a more responsible poor man’s Kris Letang. The upside will only get higher in years to come with the forwards Maatta has in front of him.

That is it for now. Good luck this week in your Fantasy leagues and remember to follow @ChrisWasselTHW for the latest Fantasy hockey advice and more. Thanks again for reading.

Now it’s your turn. Let us know in the comments below who your favourite Fantasy hockey wavier wire pick up of the week is.

When you look at the salary and what the defenseman is expected to do in Minnesota, you have two different projections. That is just how it is. The translation of 40-to-45 points over an 82-schedule is about a 24-to-28 points over 48 games. Suter may fall below those numbers as the pressure of playing as the big defensive guy take its toll. The goals and points may be there, but they will fade late.