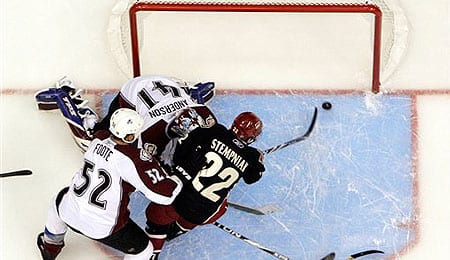 Lee Stempniak has been damn hard to stop since the trade to Phoenix, so hopefully you took our advice and picked him up. (AP Photo/Ross D. Franklin)

So it has come to that time of year when people wonder what to do. There are less than two weeks to go in your Fantasy hockey season and if you are in H2H leagues, your finals or semis have started. Injuries have done a number on your team all year, but now you really are up against it. What do you do?  I said what do you do? Well, you come to the Wire Troll, where if you had listened to us after the trade deadline and picked up Lee Stempniak, you would be reaping the rewards like its no one’s business. Even guys like Tyler Bozak (Toronto) are tearing it up a bit in the NHL. These are just a few of the gems you could have had if you had listened to us.

Now, we have our share of misses…let’s be fair here. I am thankful to say our hits have been greater than our misses this year and we really hope that we have helped you in your quest for Fantasy hockey domination. The feedback has been great and pretty much all positive. You can always ask us any time of year for Fantasy advice as well. No question is too big or too small to ask. The purpose of the Wire Troll is not to find the guy on waivers that has the most of this or that, but the guy that may be under the radar in many leagues that you can pick up for a more long-term fix. Yes, some of our guys are short-term plugs, but most are not. Obviously there is no 100 per cent guarantee to protect you from a dud.

This week, I have to be honest, most waiver wires are scraped clean. I went digging around like a little kid hunting for good Easter eggs and I swear I kept coming up with the eggs that only have a penny. It was a sad exercise, but a good lesson for Fantasy hockey owners as you generally come to the dance with what got you there at this point and time. But, if you are looking for a few that could surprise, you still have come to the right place.

Kris Russell, D, Columbus Bluejackets: Now, this name seems odd to be here, but really it is not. Columbus is suddenly letting loose and scoring, which is something it has not all year and Russell is seeing some appreciable playing time of around 22 minutes per outing in his last six games. He has an above average shot and with guys like Jacob Voracek and Antoine Vermette heating up, Russell should see his share of chances for assists at the very least. We acknowledge that this is a gamble, but honestly the last couple weeks of the season are nothing but taking a flier on Player A or risking all reputation for Player B and that sort of thing. Columbus has a favourable schedule and I would take notice.

Jim Slater, C, Atlanta Thrashers: We went way into left field for this one, and wait until you see the last one. If you are not concerned about ice time, then Slater may be for you. Atlanta has some scoring options, but Slater has picked up his game a bit in the last couple weeks. He may not get a point every time out, but he can get you about a point every other game which bodes well. He also averages over two shots a game which is more than your injured players are getting you right now. His eight points in his last 15 played (according to ESPN) indicates he warrants at least a strong look and maybe a get. Do you have anything to lose right now? I did not think so.

Dean Arsene, D, Edmonton Oilers: For a guy that fights, Arsene does get a decent amount of ice time, so he will not louse up your averages. This really is the only category he excels in, so do not expect scoring. However, if you are in desperate need of PIMs and guys on the waiver wire like Matt Carkner or Nick Tarnasky are not available, then you may be interested in Arsene. He is so far down that he should be available in just about any league you are looking for help in. If your PIMs are hurting, but you do not want to obliterate your ATOI, then this is the guy to take a flier on. At the very worst, you can drop him for the weekend.

Next week, we’ll take a look at the deepest of the deep that could be out there. This would almost be like Deep Blue Sea but worse. Good luck this week in your Fantasy leagues and keep the faith. If you have any questions, fire them up at RotoRob.

By Chris Wassel
This entry was posted on Monday, March 29th, 2010 at 4:00 pm and is filed under Chris Wassel, Fantasy Leagues, HOCKEY, The Wire Troll. You can follow any responses to this entry through the RSS 2.0 feed. You can leave a response, or trackback from your own site.