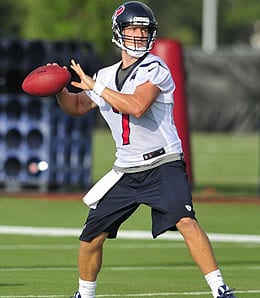 It’s almost playoff time, and by now at least a few of your Fantasy workhorses have betrayed you, plus you’ve had to deal with one-point games, injuries, or even a late year suspension (really, Justin Blackmon… really?!). Well, it’s gut check time and no one can be trusted, so do you have what it takes to sit a blue chip stud or start a nobody? Of course you do. Check out the Week 12 edition of Start ’em, Sit ’em.

Frank Gore, RB, San Francisco 49ers @ WSH: Gore is healthy heading into Week 12… that seems strange to say. Well, we’re a little bit superstitious so we will take it as a sign that he’s due for a big game. Oh, and let’s not forget the Washington Redskins aren’t very good against the run, so who knows? Maybe Gore will break through for a run like the one in the video below.

Case Keenum, QB, Houston Texans vs. JAC: Houston can’t seem to win no matter who’s at quarterback, but this is Fantasy football, so wins and losses are not our concern. We care about production and it seems to be clear which QB gets this team producing. The Texans gave him the start and so should you.

Bobby Rainey, RB, Tampa Bay Buccaneers @ DET: Is he the real deal? It’s a little early to tell, but what we do know is that when you’re a head coach that’s on the chopping block and you find something or someone that gets you on a two-game win streak, you stick with it.

Alshon Jeffery, WR, Chicago Bears @ STL: Lo and behold, there is a receiver on the Chicago Bears that is not named Brandon Marshall, and the quiet has kept this kid pretty reliable, so stick with him.

New Orleans Saints Defense @ ATL: The Atlanta Falcons will surely snap out of this funk at some point, but we just think it’s going to be next year. Start the NFL week off right and go with the Saints defense.

Maurice Jones-Drew, RB, Jacksonville Jaguars @ HOU: These teams’ records are close, but the talent is not. The Houston Texans defense will send MJD owners into an even deeper depression. Sit him down.

Philip Rivers, QB, San Diego Chargers @ KC: With Kansas City’s vaunted defense fielding exactly zero sacks in the last three games maybe Rivers should feel good about facing the Chiefs. Or should he? Rivers will have to travel to one of the loudest stadiums in the world, the red vortex that is Arrowhead Stadium, and even with Keenan Allen on the mend, we see the Chiefs’ defensive line getting their swagger back, which means Rivers will be on his back.

Roddy White, WR, Atlanta Falcons vs. NO: At this point we feel like we’re just being mean, but when your team is so bad that losing to you might be a fireable offense, you just have to look elsewhere.

Carolina Panthers RBs @ MIA: Has there ever been a backfield that is more inconsistent and frustrating as Carolina’s? We think not and it’s too late in the year to be playing handcuff shell games. Cam Newton is the best rusher in Carolina by far, so if you don’t have him don’t bother.

Adrian Peterson, RB, Minnesota Vikings @ GB: Groin injury or not, we have to say if you have a guy sitting on your bench that you’ve wanted to plug in, but couldn’t for fear of “All Day” having one of those Bo Jackson on Tecmo Bowl games, yeah I know, I know, but you have to put ’em in coach because even if Peterson plays, the overcautious Leslie Frazier will see to it that he doesn’t get enough touches to have a big game.

So when round seven rolls around, stash Blackmon in your queue and pull the trigger once you see other second tier WRs start to come off the board. Many Fantasy owners have already wiped him from their radar because of the suspension. Blackmon does have a past history of getting in trouble, so he is still a very risky draftee. But don’t forget he did rack up 64 catches, 865 yards and five TDs despite being saddled with a sub par QB. Blackmon also finished the year by catching at least six balls in each of the last four games.