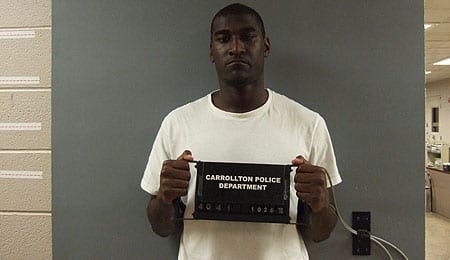 Justin Blackmon could be a Fantasy um… steal this year.

With the NFL season approaching, many Fantasy leagues will have their pages up by early June (I know I will). Some crazies will even draft in early August. I prefer to wait until the last possible night. That way I know the position battles are squared away and those that need to tighten their chinstraps will do so. Others will falter in training camp and be relegated to special teams duty until an opportunity arises. Today, we want to focus on those players, for they are the ones that fill in those bye week gaps and stabilize our Fantasy rosters for playoff runs.

Without further ado, we present the Top 10 Fantasy steals of 2013.

1. Justin Blackmon, WR, Jacksonville Jaguars: First off, we all know that Blackmon has been suspended for the first four games of the season. That’s precisely why he is number one on this list. Unless you are in a league with multiple Jags fans (which is highly unlikely), Blackmon will likely fall like Matt Barkley did in the actual NFL draft last month. So when round seven rolls around, stash Blackmon in your queue and pull the trigger once you see other second tier WRs start to come off the board. Many Fantasy owners have already wiped him from their radar because of the suspension. Blackmon does have a past history of getting in trouble, so he is still a very risky draftee. But don’t forget he did rack up 64 catches, 865 yards and five TDs despite being saddled with a sub par QB. Blackmon also finished the year by catching at least six balls in each of the last four games.

2. DeAndre Hopkins, WR, Houston Texans: This rookie is going to dazzle and frustrate opposing secondaries. Ironically, Hopkins will probably make fellow receiver Andre Johnson better by taking attention away from him. You should feel out your league first, but feel confident picking up Hopkins in the fifth round. If you get him in any round beyond that you should cover your keyboard because saliva will flow.

How good are Hopkins’ hands? Find out for yourself…

3. Andy Dalton, QB, Cincinnati Bengals: This will be Dalton’s third year and he has started every game for the Bengals since they drafted him. He is durable, smart, and he has weapons. Dalton’s numbers have modestly increased throughout his first two campaigns, but this year he is primed to explode. Yes, he did throw three more picks last season than he did as a rookie, but he also throw seven more TDs. So when the big slingers are already snatched up and the fifth round rolls over to you, Dalton is your man. He is a pacesetter with major upside potential.

4. Daryl Richardson, RB, St. Louis Rams: It’s no secret that Richardson is line for loads of touches with Steven Jackson now working on his “dirty bird” dance. As the season approaches, Richardson will be a hot item to be flirted with when round three rolls around. Nabbing him there would definitely be good value. What is enticing is that Richardson could play like a first round pick. For starters, he has a blossoming QB in Sam Bradford, who, like Dalton, has the weapons to spread things around. Secondly, Richardson has moves and the slickness to avoid the big hit. Okay, so he did not score a touchdown last year but don’t let that ruin your chances of landing this future Pro Bowl back.

5. Donnie Avery, WR, Kansas City Chiefs: Avery is a guy that has successfully re-established himself twice. Now he’ll line up across the field from Mr. Consistent, Dwayne Bowe. Avery has never performed at a superstar level, but given the right situation he could be a legit number one receiver. He was one of the recipients of the Andrew Luck show last season and Kansas City very smartly added him to the Alex Smith show as a supporting character. Avery is a receiver many tend to forget and being a Chiefs adds to that. So when the closing rounds are ticking by and both your top two WRs have the same bye week, add Avery instead of that underachiever you always draft.

6. Brandon Myers, TE, New York Giants: Eli Manning has a knack for helping tight ends mature. Now he has one that made Carson Palmer look relevant. His name is Brandon Myers and why the Raiders did not hold onto this kid is beyond me. He very quickly became a vacuum and the backbone to any success Oakland experienced last season. Myers finished fourth in receptions by a TE and sixth in yards. He found the end zone four times and you can bet that Eli will know where he is in the red zone. So when you miss out on Jason Witten and Jimmy Graham, wait until round six and select this gem.

7. Martellus Bennett, TE, Chicago Bears: In a field of goats, Bennett is a gazelle. He is the big target that Jay Cutler has needed since he arrived in Chicago. The red zone offense needs a power forward to make everything else effective. Bennett was trapped in Witten’s shadow in Dallas until he became a Giant last season. Bennett had early success in New York, but then slowly withered away. Then again, so did the Giants. The Bears will have to continue to find ways of getting him the ball and jump balls should be a must. Expect Bennett’s late season trickle to hurt his stock, but draft him with confidence in round seven or higher as your number one TE.

8. Kyle Rudolph, TE, Minnesota Vikings: If you have owned Rudolph before, you know receiving yards have not been his strength. Well that is about to change. The addition of Greg Jennings and Cordarrelle Patterson should clear the middle of the field for Rudolph. His size and deceptive speed make him a tough player to tackle in the open field. Rudolph also has the elite luxury of a guy named Adrian Peterson limiting the pre-game focus on him. “Ponder fakes the handoff to AP, dumps off to Rudolph over middle, he’s got some room.” Rudolph should be drafted in rounds nine through 13, but he could end up a top five TE option.

9. Ryan Tannehill, QB Miami Dolphins: Those of you that doubted Tannehill probably gulped when he turned in respectable rookie numbers. Is it possible that Miami may have a legit QB again? He may not be the next Dan Marino and he is definitely not as sexy as E.J. Manuel. So what is Tannehill? He is a poised dart thrower that had his rookie foibles. Tannehill was also given a burner named Mike Wallace, which should eliminate any safety from blitzing. Last season, Tannehill’s footwork and posture gradually improved. He stood tall and threw with his mid-section. Tannehill is a strong, smart kid who is not afraid to get his nose dirty to move the chains. Best of all, he can be had late — drafting him in rounds eight to 10 would offer maximum value. Chances are, if you are taking Tannehill there you are the last one to draft a QB and that’s okay. Even Michael Vick thinks so.

10. LaMichael James, RB, San Francisco 49ers: Frankly the core of Frank Gore is in full view and he is always an injury risk. The other RB in this depth chart is Kendall Hunter who is coming off a pesky Achilles’ injury and he will need some time before his confidence is restored. In steps the tenacious LaMichael James. This kid has speed and a crafty first step. He only caught three balls last season and that will need to be his focus in training camp as he tries to build the team’s confidence in him as a third down threat. Running between the tackles is never easy for a guy James’ size. That’s where his speed comes into play. If the opening is there, James can explode through it. If you draft Gore early, trust in James late. When round 10 rolls around and you are thinking about which kicker will kick the most field goals, remember the speed of James. Did I mention he is fast?

By Josh Johnson
Tags: Justin Blackmon
This entry was posted on Wednesday, May 15th, 2013 at 1:59 pm and is filed under 2013 RotoRob NFL Draft Kit, FOOTBALL, Josh Johnson. You can follow any responses to this entry through the RSS 2.0 feed. Both comments and pings are currently closed.