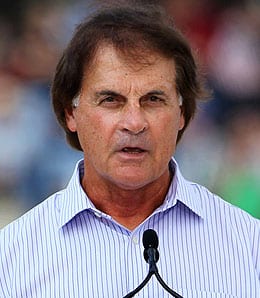 Former manager Tony La Russa, who will be inducted into the Baseball Hall of Fame this summer, believes that Jeff Bagwell, Jack Clark and Jack Morris should all be Hall of Famers, but are being shut out because of what he calls an exaggerated reliance on new metrics.

Of course, La Russa failed to explain exactly why (or under which old school metrics) these players should be in the Hall.

The real problem with Bagwell is his build — which makes him look like a steroid baby, and hence he gets thrown in with that group.

Bagwell was an extraordinarily patient hitter as evidenced by a career OBP of almost .410.

And while his speed waned near the end of his career, remember that he twice was a 30-steal man, winding up with over 200 swipes to go along with almost 450 homers.

At least La Russa has a case there, even if he didn’t actually communicate it.

As for Clark, only three times in his career was he even a top 10 player within his league. He spanked 340 dingers in 18 seasons, but only once did he reach 30 homers to go along with two 100-RBI seasons. The dude enjoyed a solid career, but to say he belongs in the Hall of Fame? Me thinks it’s time for a random drug test for La Russa. Or maybe he should just stick with his animal rescue foundation (see video below).

Now it’s your turn. Let us know in the comments below what you think Tony La Russa is smoking these days.

Crave more in-depth Fantasy analysis? Then join us every Thursday at 9 p.m. EST for RotoRob’s Fantasy Baseball Weekly Podcast on Blogtalkradio as we entertain and edify you for a half hour or more each week. Tune in here.

By RotoRob
Tags: Jeff Bagwell
Posted in BASEBALL, Hall of Fame, RotoRob | Comments Off on Should Jeff Bagwell and Jack Clark be in the HoF?