Posts Tagged ‘Jake and the Fatman’ 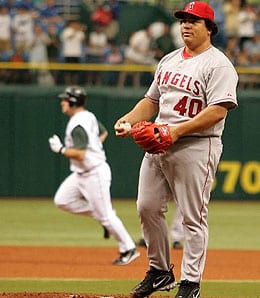 In three starts and 20 2/3 IP since his activation, Colon has been shelled for 29 hits and 14 runs (11 earned) while getting spanked for five long balls. A .385 batting average against? Ouch. That’ll leave a mark. On the plus side, with just three walks allowed, his control has been excellent, but he’s managed just 12 Ks, hardly a dominating rate.

Colon takes the mound for the Angels in Seattle Wednesday, so let’s see how this start goes before we completely panic. He’s 4-0, 1.50 at Safeco over the past three years, so if he takes another bitch-slapping tonight, then you shift your worry meter to DefCon 3. Be aware that Colon has already been dropped in a small amount of mixed leagues, a fact that speaks volumes given the paucity of pitching these days.

Maybe Colon is just lacking some inspiration. Perhaps he should delve into his collection of Jake and the Fatman reruns to fuel his competitive juices.