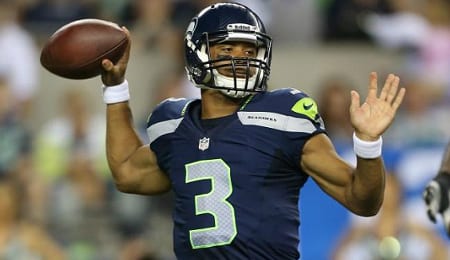 Russell Wilson will have a bulls eye on his back all year, but he could emerge as a must-start option. (Footballperspective.com)

The 2014 RotoRob NFL Draft Kit — like an unstoppable force — surges forward today with yet another of our beloved cheat sheets. So while you wonder whether Jamaal Charles will be worth the extension he signed with the Chiefs, let’s review the top 20 quarterbacks in Fantasy football for 2014.

The evolution of the forward pass has come a long since the days of leather helmets. We saw this coming when Dan Marino torched defenses to the tune of 5,000 yards and 48 touchdowns in 1984. Then Warren Moon arrived in Houston and the run n’ shoot exhilarated us. The new millennium was ushered in by Kurt Warner, Tom Brady and Peyton Manning. The trend continued with the emergence of Drew Brees and Aaron Rodgers. Yet this read-option trend still seems to be an integral part of the future — sustainable or not. Save Marino, the aforementioned QBs all have Super Bowl rings. Last year’s ring bearer, Russell Wilson, is a hybrid with speed and versatility for the occasional read-option set, but his traditionalist college past will allow him to be successful in different ways as well. Basically the more dimensions you can possess as a gun-slinger the better.

1. Peyton Manning, Denver Broncos (7): The Broncos are built around the passing game and Manning is so smart he knows where he is going to throw the ball before it’s even snapped. He might not break his own NFL records this season, but he has proven beyond any doubt that his prime is not over.

2. Drew Brees, New Orleans Saints (2): Not only does Brees have many weapons, he also knows how to use them and play to their strengthens. He is one of the smartest athletes in all of sports, which helps him put up elite numbers every season. We are concerned about the fact that Breese was sacked 37 times in 2013 — compare that to Manning (18) and that’s why Brees comes in at two. Besides, Brees uses Advocare (see video below). No, we have no idea what Advocare is for, either, but clearly it is not used to fix massive face gashes like the one he’s sporting in this clip. Um, it’s called makeup. Look into it.

3. Aaron Rodgers, Green Bay Packers (1): The Pack basically had just four WRs last season hence they drafted three. Rodgers is, to put it simply, one of those special players that makes those around him better. Now he finally has a RB in Eddie Lacy that he can trust. A healthy Randall Cobb and Jordy Nelson will mean free room to roam for rookie WR Davante Adams. For comparison’s sake, Detroit’s Matthew Stafford might throw a couple more touchdowns, but he will also throw plenty more picks.

4. Nick Foles, Philadelphia Eagles (NR): Talk about weapons a-plenty! A healthy Jeremy Maclin returns to be surrounded by Riley Cooper, Jordan Matthews, Zach Ertz and a little fella named Darren Sproles. Philly also has a cat they call Shady (LeSean McCoy), who has caught a pass or two in his career. Foles should now be well-versed in Coach Chip Kelly’s scheme. It’s doubtful that Foles will improve upon his TD-INT ratio of 27-2, yet we still love him this year and even more so in dynasty formats.

5. Matthew Stafford Detroit Lions (6): So, Stafford had a little interception problem last season, in fact, his 19 INTs were the most of anyone in our top 10. But his 29 TD passes ranked sixth in the NFL last season and now he has more weapons. Newly added free agent WR Golden Tate and rookie first round TE Eric Ebron should compliment Calvin Johnson nicely. Stafford now has the best offense around him he has ever had and probably will ever get. If there ever was a year for him to peak, this is it.

6. Matt Ryan, Atlanta Falcons (5): The trio of Roddy White, Julio Jones and Harry Douglas were apparently enough weapons, hence the Falcons will stick with a blocking TE. We agree and since they drafted OT Jake Matthews, now both of Ryan’s sides will be protected. Atlanta was 4-12 last season but Ryan still threw for 4,515 yards and 26 TDs. His career-high 17 INTs were certainly alarming. But, given the rash of injuries last season, all those picks were not surprising. With three healthy weapons, Ryan is not elite but he is no slouch either.

7. Tom Brady, New England Patriots (3): Brady has the “it” factor about him. His brilliance has baffled defenses for years but he hasn’t won a Super Bowl in almost 10 years. Brady’s numbers have been declining in recent years and he is now 36. Even in decline, though, his Fantasy value is still very good. Brady should be starting somewhere in your league and if he slips to round four or beyond you would crazy not to pounce on him.

8. Jay Cutler, Chicago Bears (20): Cutler has a very good RB behind him in Matt Forte and double-barrel shotgun in WRs Brandon Marshall and Alshon Jeffery. We also like what TE Martellus Bennett gives Cutler, especially in the red zone. The big question for Cutler will always be his health. Had he not missed five games last season, we might have been slotting him in the top five. Cutler has a rifle and the scope of this offense is designed around it.

9. Philip Rivers, San Diego Chargers (17): Rivers was a top five QB last season, yet so many of us wanted write him off heading into the season. So why is he not in our top five this season? We love WR Keenan Allen and TE Ladarius Green but besides a little third down help for Danny Woodhead we are not sure Rivers has enough outlets to prosper or improve upon his 2013 numbers.

10. Cam Newton, Carolina Panthers (4): The “mobile” Newton was sacked 43 times and his rushing attempts were slightly down last season. Can we chalk that up to maturity or a need to limit injury risk? Coincidentally, the Panthers enjoyed a five-win improvement. We see the days of dual threat Newton slowing even more. We do still think his athletic prowess will carry both his team and your Fantasy squad a long way. His weapons have changed but Newton is still the trigger man.

11. Robert Griffin III, Washington Redskins (10): Of resident Redskin homer Nick Wagner sees RGIII bouncing back, but he is not alone. DeSean Jackson is now a part of Griffin’s aerial attack that already features WR Pierre Garçon and athletic TE Jordan Reed. Sleeper is the word and your Unisom is about to wear off.

12. Andrew Luck, Indianapolis Colts (8): Even if living legend Reggie Wayne isn’t fully healthy for the start of the season, Luck still has options. T.Y. Hilton will be joined by newly signed Hakeem Nicks and third round selection Donte Moncrief. Da’Rick Rogers and Coby Fleener can also make an impact. Luck is everybody’s boy wonder and we too like him. He will only get better with time and we see him as a low-end starter in most formats.

13. Russell Wilson, Seattle Seahawks (9): Would you believe Wilson endured 44 sacks last season? Wait, didn’t this team win the Super Bowl? New and fully healthy weapons excite us greatly but remember every team will throw the kitchen sink at Seattle this season. Even so, this still could be the year Wilson becomes a must-start option.

14. Andy Dalton, Cincinnati Bengals (16): The jury is still out on Dalton, although he was a waiver wire darling last year. His critics shout that he would be nothing without WR A.J. Green. To that we say Green is a still a Bengal, so shout up. Dalton has slowly gotten better each season, and the numbers don’t lie. The “Red Rifle’s” rise will continue.

15. Ben Roethlisberger, Pittsburgh Steelers (19): Big Ben’s 29 TD passes in 2013 were more than Brady, Ryan, Wilson and even Newton. In fairness, that number is a product of a lack of a running game and the Steelers often trailing. However, it’s hard not to like this guy as a player. Roethlisberger is tough and with some added weapons in veteran Lance Moore and smooth as silk 6’4″ rookie WR Martavis Bryant, we like his chances to be a very effective QB.

16. Carson Palmer, Arizona Cardinals (NR): Any QB with Larry Fitzgerald could make our top 20. Even Geno Smith couldn’t overthrow the former Vikings ball-boy. Troy Niklas will emerge open in the ‘Zona double TE set and Sir Andre Ellington shall patrol the flat. Palmer still has something to prove and playing in the toughest division in football can only make him stronger.

17. Josh McCown, Tampa Bay Buccaneers (NR): Those of us in the know realize how valuable Vincent Jackson can make any QB. Add beastly Austin Serefian-Jenkins and burner Robert Herron to run with Jackson and you’re gold, right? The Bucs also drafted this kid named Mike Evans who is basically the next V-Jax. Rookie RB Charles Sims will be a quality third down outlet back. So, yes, we like McCown’s chances to end being more valuable than 17th, but we also see Mike Glennon getting a chance should McCown toss three picks in a game. Basically relish in whatever you get out of McCown.

18. Tony Romo, Dallas Cowboys (13): We heard your cries of “Chok-o-Romo,” but the facts state that he is a decent Fantasy performer. So why don’t we have him ranked higher? Romo’s best days are firmly behind him as are those for top target Jason Witten. Dez Bryant is peaking but he is still a prima donna and loose cannon. Romo’s back issues have also festered longer than Jerry Jones and company thought. Still, Romo will have his good performances and we hope you have the know-how and the balls to use him when he does.

19. Eli Manning, New York Giants (14): Manning was a pick machine in 2013 (league-leading 27 INTs) and yet so many of you banged on Romo (who threw 10). After an active free agency period and a decent draft, the G-Men should have a better team. Therefore, salsa dancer Victor Cruz should have more space to inflict some spicy damage. Plus, first rounder Odell Beckham should push Rueben Randle for snaps. Manning already has the bling and even though an ankle injury is slowing him this summer he hasn’t missed a start since since 2005, so let’s at least give him kudos for his durability.

20. Colin Kaepernick, San Francisco 49ers (12): Frankly, we didn’t like who was left off our top 20 enough so congratulations, Mr. Kaepernick, you made it! Of the QBs that started 16 games only Geno Smith threw for less yards than Kaepernick. However, Kaepernick did throw more TDs than Joe Flacco and Eli Manning, so chew on that for a while. Kaep is still a risky pick in our eyes.

Now it’s your turn. Let us know in the comments below which QBs you’re targeting this season.

Crave more Pigskin Fantasy chatter? Then join us every Wednesday at 1:30 p.m. EST for RotoRob Fantasy Football Weekly Podcast on Blogtalkradio as we commit personal fouls and chop-blocks for 90 minutes or so each week. Tune in here.