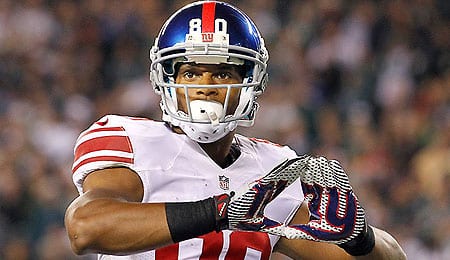 Victor Cruz has been inconsistent this season. (Bigblueunited.com)

If you are reading this it either means that you love our witty verbiage (which is good) or you’re in the playoffs and love our witty verbiage (which is better). During the regular season you can afford to take a few chances, but in the playoffs every point counts. Here are a few moves to keep you from getting bounced in the first round, so let’s check out Week 14’s Start ’em, Sit ’em.

Vincent Jackson, WR, Tampa Bay Buccaneers vs. BUF: Despite fairly consistent quarterback pressure and a league-leading 42 sacks, the Buffalo Bills secondary seems to be woefully unable to keep opposing wide receivers in check. Expect Jackson — who is prone to making big catches in big situations (see the video below) — to join that ever growing list.

Victor Cruz, WR, New York Giants @ SD: Cruz has been pretty uneven this year and may even have got to the point that you’re thinking about benching him. But not so fast, the Giants are in desperate need of one of his signature big plays (salsa included) and the Chargers have been pretty weak against the pass, so stick with him for at least one more week.

Ray Rice, RB, Baltimore Ravens vs. MIN: Minnesota is among the league’s worst when it comes to stopping running backs and although Rice has not wowed this season he should be able to take advantage of the Viking Swiss cheese-like defense.

Rashard Mendenhall, RB, Arizona Cardinals vs. STL: The Rams being poor against the run would be enough for us to start Mendenhall, but ever since he has made his way back into the lineup, the Cardinals brass seem intent on getting him back to his previous form. The cherry on top is that Andre Ellington has been banged up, so we see Mendenhall having a pretty solid outing.

Jared Cook, TE, St. Louis Rams @ ARI: The Arizona Cardinals have a very strong defense except in one area — defending TEs, and guess who absolutely torched this Arizona defense in Week One? You guessed it — Cook.

Pierre Garcon, WR, Washington Redskins vs. KC: When Kansas City is in its standard 3-4 defense, it is actually pretty tough to throw on, but when the Chiefs are forced into a nickel set, teams have been picking on rookie cornerback Marcus Cooper. That all sounds like a good reason to start Garcon, right? Not really. Lately Garcon and Robert Griffin III have not been able to sync up on deep routes, which greatly diminishes Garcon’s ability to be a serious threat. If you’re not strapped at WR, park him.

Mike Wallace, WR, Miami Dolphins @ PIT: Wallace has had a few flashes of greatness this year (accent on “few”) and normally we like players going against their former teams, but this player, against this team, at home? We’ll pass.

Ryan Mathews, RB, San Diego Chargers vs. NYG: Simply put, despite pass rush woes, the Giants have been pretty stout against the run and Mathews has been, well… blah. And we’ll take stout over blah any day.

Josh Gordon, WR, Cleveland Browns @ NE: We can already see your faces and hear your cries of “you would have to be nuts to bench “Flash” Gordon.” Well, we’ve said it once and we’ll say it again: no coach maybe in the history of the league is better than Bill Belichick at taking away the opposition’s best offensive weapon. We have to be honest though, part of this decision is us assuming that the other shoe has got to drop, because if Gordon has another game like his last two, we want him tested for radioactive spider bites.

By Vaney Hariri
Tags: Tampa Bay Buccaneers, Vincent Jackson
This entry was posted on Wednesday, December 4th, 2013 at 1:47 pm and is filed under FOOTBALL, Start 'em Sit 'em, Vaney Hariri. You can follow any responses to this entry through the RSS 2.0 feed. Both comments and pings are currently closed.