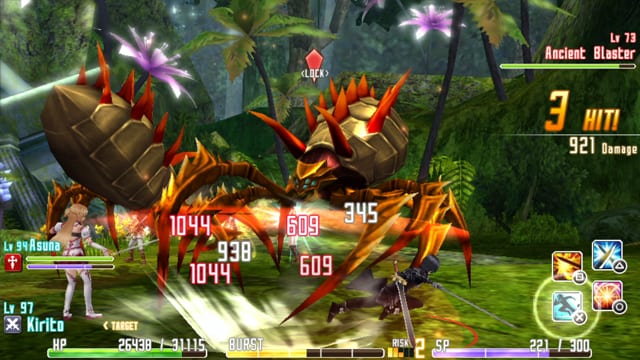 It’s times like these that I wish I had bug repellent.

Sword Art Online is one of those recent anime series that grew in popularity on account of its interesting premise. A group of players finds themselves trapped inside of a virtual reality MMO world where, if they die in the game they also die in the real world. As such, they must play the game and ascend the numerous floors featured in this virtual reality.

The PlayStation Vita title, Sword Art Online: Hollow Fragment, takes place after the anime series on the 76th floor. What challenges and obstacles await these players (both in the story as well as in real life)? Let’s find out.

Sword Art Online can be very complex when it comes to controls as essentially every button on the PlayStation Vita, as well as the touch screen, is employed. With several skills to equip at once, it can be a challenge to get used to. Keep in mind you’ll also need to use the left stick for movement, and the d-pad for executing commands for partners. The camera controls via the right stick can be somewhat cumbersome and uncooperative as well. Still, with some time and perseverance, you’ll become comfortable with the control scheme.

Filled with lush and colourful effects and characters, Hollow Fragment appears to be spectacular. The same can be said about the various cut scenes featured in this game. On the other hand, certain areas, including the dungeons, can look pretty boring and repetitive, and the frame rate occasionally suffers some lag because of high amounts of activity — especially given the high number of in-game characters present.

Your home base is established on the 76th floor, where you can purchase various weapons, armour and other items. Additionally, you can interact with other characters within the town, thereby raising your relationship status with them. Finally, there is an inn that allows your character to rest in — some character events you can participate in are only available during a specific time of day.

When you are ready to engage in combat, you’ll want to teleport to the next floor and progress accordingly. You have the option of either going solo or bringing an additional character to accompany you in battle. In the latter, he or she can be instructed to perform certain skills and/or actions. But mostly, the AI will actively be taking control when it comes to executing attacks.

For your own character, you are essentially performing strikes against enemies continuously, which can be somewhat repetitive. Progressively though, your AP meter fills up, ultimately allowing you to perform special skills. If you wish to increase this meter more quickly, however, you can use items or even have your teammate take part in the replenishing when they perform attacks on enemies. This aspect of Sword Art Online: Hollow Fragment is what helps keep players captivated with the combat system and dynamics.

Within each floor, there are around four quests you can participate in. By completing each one, a useful fact about the boss will be provided to you. Once you complete the necessary quests, you will be engaging in a boss battle in which you have a party of characters to join you.

Still, your controls are limited to your own character and one teammate. That doesn’t mean that you can neglect the rest of the group. On the contrary, it’s best to beef up their stats and heal them if you want to ensure victory against the bosses, especially since these battles can be sizeable affairs.

In terms of multiplayer, you’re allowed to play with three other players but only via an ad-hoc connection. That means there is no online capabilities, which is ironic considering its title: Sword Art Online: Hollow Fragment. Consequently, players may be disappointed by this missing feature.

Besides progressing through floors, you can access another world where you participate in the Hollow Missions. Here, you have a large map with numerous areas for you to explore as well as gain the opportunity to earn a higher rank. This aspect adds another layer of enjoyment since it gives a completely different set of content and adventure for your character to embark on.

Sword Art Online: Hollow Fragment is quite extensive in terms of content and gameplay, giving Vita owners another excuse to fire up their console. Those who are fans, or even just familiar with the anime, should be especially pleased with this title.

Surprisingly enough, this Nintendo 3DS title is not presented in 3D. But it shouldn’t be that big of a deal, right? Well, the cut scenes themselves consist of static images with text appearing on screen. Here, they drag on for a very long time and can be painful when there’s nothing exciting or enjoyable to watch. Then when you jump straight into the gameplay, you’ll quickly notice the grainy texture quality and bland environments. The graphics wouldn’t be that bad if the 3D effects were to kick in, but once you remove that it’s pretty much downhill from here.

As for the audio department, the sound effects do a great job fitting in and performing their function. The music also manages to keep itself from being repetitive and tedious, but at the same time it’s not going to rate as memorable or outstanding.

There are eight female characters that are somehow associated with this Skull Heart. The roster may lack depth in comparison to other fighting games’ on the market. Nonetheless, the characters themselves are unique and charming enough to overlook this limited selection.