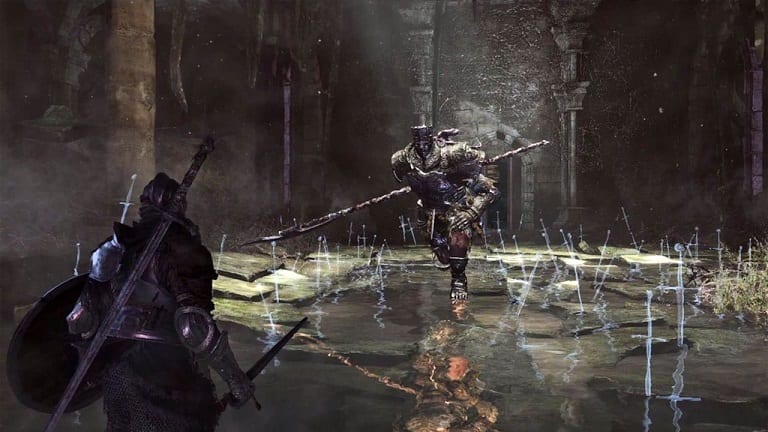 Once again, the time has come to rise from a grave in an unfamiliar place. This strange world has called out, awakening you from a great slumber in order to quell the destruction and rule wrought by The Lords of Cinder. As the Ashen One, your task is to extinguish the flames of the Lords and bring regularity to this strange, dangerous world.

While the basic formula of the series has not changed in Dark Souls III (fight, earn souls, use souls, lose souls), nearly every feature of past games has been revamped. Pick up your axe, ready your Wrath of God, and prepare to die… a lot.

Although this game takes a vast amount of practice to become proficient in the ways of aggression and self-preservation, FromSoftware has added a few new features to smooth out some of the more annoying facets from the series.

The first great change is that you no longer have to press down on the d-pad rapidly to switch back to your “initial” item; you may now just hold the button for a second and the selection is made, so going from throwing knives back to your Estus Flask is super simple now.

It’s the same for spells now, too, so sorcerers, clerics and pyros alike stand a much better chance against the world and its inhabitants. Other than that, the controls remain the same, as does the deliberate and immediate response of your button presses.

As you play Dark Souls III, you will often find messages on the ground, usually facing a wide vista. “Gorgeous view ahead” reads the message, and it’s no lie. Dark Souls III looks absolutely fantastic, featuring some of the best architecture design we’ve ever seen.

Inhabitants of these wrecked halls and poisonous dungeons are mostly terrifying and always fitting of their surroundings. Some specific enemy types made us want to set our TV on fire (like the long-legged spider things from Irithyll Dungeon) in order to rid ourselves of them. Four TVs later, we discovered digital fire functions just as well.

In addition to the robust scenery, spell effects and combat animations are top shelf. Hit boxes have also received much attention, bringing the impact of the fighting even closer than it was before. Clothing effects first seen in Bloodborne make liberal appearances as well, giving a raw and grounded feel to all of your equipment.

Behind all of the crunches of axes breaking bones and fireballs rumbling down hallways is a wonderful soundtrack. The Dark Souls series has always had a somewhat minimal approach with its music, often favouring slower, floating melodies. In Dark Souls III, from the moment you press “Any Button,” you’re treated to some of the most empowering and inspiring music in the series to date.

Sticking to the infamous difficulty of the series, Dark Souls III would rather chop off your hands than hold them. As soon as you awaken, you’re faced with a few simple enemies to readjust to the controls. It’s not long after you’ve felled a few lowlies that you’ll happen upon your first (of many) boss fights.

The first boss, Iudex Gundyr, stands in the way of the Firelink Shrine, which acts as your hub for leveling up and resupplying yourself. Much like the Shrine from Dark Souls and Majula in Dark Souls II, there is plenty of hidden lore in every corner and in every piece of dialogue.

NPCs found in the shrine (or out in the world) can also provide quests to undertake. Unlike practically every other game, Dark Souls III leaves the guidance of the quest to you. For example, a thief named Greirat has you searching for a woman named Loretta. He gives you an extremely vague location where you may find her, and that’s pretty much it.

There are no arrows, markers, or maps to reference, just your noggin. This is both a wonderful and terrible feature, since the quests are so damn vague you can fail them simply by progressing regularly through the game. We guess that’s what NG+ is for then, right?

As you fight your way through the story, a number of familiar NPCs and usable items from games past make appearances, and for obvious reasons we won’t spoil those. We can say, however, that there will be plenty of surprises for Souls veterans.

What would a Dark Souls (or any Souls-esque game) be without jolly co-operation and hostile invaders? Mostly boring and still damn difficult probably, but we luckily don’t have to worry about that at all. Various Covenants can be joined, each with their own (usually vague) objectives.

Among them is the Way of the Blue, the noob-friendly Covenant that calls assisting spirits (the Blue Sentinels) in case they are invaded. Unlike Dark Souls II, The Blue Sentinels are much busier this time around. We have not joined them yet, so we don’t know of the benefits, but we were definitely grateful when one of those beautiful blue bastards entered our game to help with an invader.

Even without a great plot, Rise of the Dark Spark could’ve still succeeded as an action game, but as with the characters it never seems to branch out from previous titles. As longtime fans, we still took a certain satisfaction in gunning down giant robots, but the game recycles the wave-based attack far too liberally, making large sections feel like a single-player Escalation mode. With all that déjà vu it really makes you wonder how much was ripped straight from High Moon’s last installment.