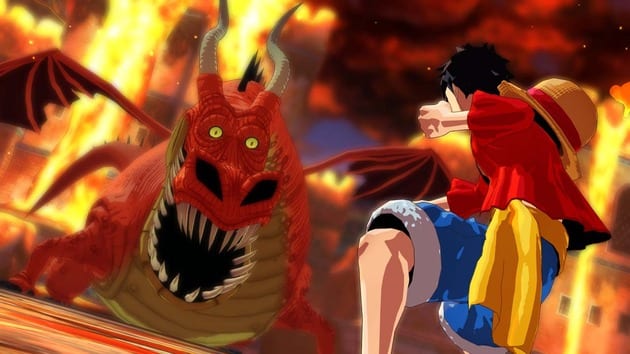 Oooh! What sharp teeth you have there.

Luffy and his pirate crew are back in the PlayStation 3 title, One Piece: Unlimited World Red. Past titles featuring this particular anime series were received with mixed reviews. Will this time be the turning point for this rubber-based pirate or would such lofty aspirations be considered… a “stretch?”

One Piece: Unlimited World Red involves a lot of combat. In this instance, the game takes on the approach of a button-mashing affair, thereby making the control scheme very simple and easy to figure out. Still, there is some depth to all this, especially given that tapping certain face buttons in combination gives different fighting attacks.

As an added bonus, during most parts of the game, you can switch out your character with a partner with a simple press of the select button. This could potentially feel awkward, especially when you need to make that last-second switch. Nonetheless, the overall controls are pretty solid with movement being fluid and responsive.

Hitting the visuals department, Unlimited World Red appears to be giving off an “unlimited” amount of style and impression with its use of cel shading along with plentiful vibrant colors. As a result, we get a shiny and beautiful world populated with the main characters that are bursting with life and personality. It’s a wonderful display of crazy action along a diverse number of tremendous looking scenery.

What also gives this game its charm is the voice acting, which is offered in its original Japanese form, thereby remaining faithful to the fans of the anime. As such, the humor behind this title is just off the charts. On the other hand, the music does do its job but fails to make the same amount of impact to the presentation as a whole. Still, Unlimited World Red certainly packs a punch in both the graphical and audio realms.

Just as he arrives in Transtown, Luffy’s allies all happen to go missing, which means he will need to travel to other distant areas to locate them. As a result, you’ll be playing from one area to the next in the beginning of the game, which can feel odd at first in terms of continuity. Later on though, your Straw Hat pirate crew will eventually get together, at which point the story moves on quite smoothly.

When you look at the story missions to be chosen within the game’s menu, you’ll notice how they have been taken straight from the manga and anime series. This definitely gives this PlayStation 3 title its charm while at the same time retaining players’ attention spans — even those unfamiliar with One Piece. The levels are pretty linear, as you fight against a gang of enemies, but the boss battles are where the game can really shine. Fighting the well-known villains of this series has never been so satisfying and uplifting.

It must also be pointed out that One Piece: Unlimited World Red does have RPG elements incorporated. Therefore, you’ll be able to improve your abilities as well as pick up single-use items that can temporarily increase your attacks or health. Additionally, you’ll be able to level up your crew members with experience points. As such, this type of RPG system is rewarding enough to establish the game’s replay value. Plus, it will encourage players to revisit completed levels to find those hidden items with the newly-acquired skills for each character.

Giving even more content to Unlimited World Red is the coliseum mode, which has its own separate narration. Here, you can engage in the battling action right away without the hassle associated with the RPG system of leveling up and such. This is also where you’ll be able to unlock new playable characters as you progress through the various battles offered in this mode. There’s plenty of content here to keep players preoccupied with both the story and gameplay.

To players that are fans of the One Piece series, it’s a no-brainer to say that One Piece: Unlimited World Red is a definite buy. For others, there’s still an opportunity for them to enjoy this game as long as this type of combat gameplay suits their tastes. Regardless, on the PlayStation 3, Unlimited World Red looks absolutely phenomenal with an almost “unlimited” amount of content that will keep you playing for hours.