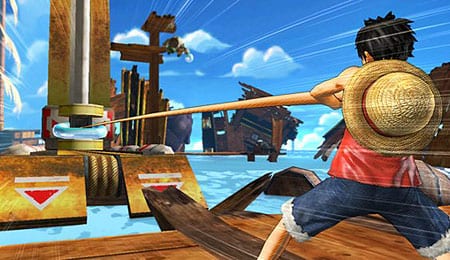 Who needs a remote when you have a reach like that?

One Piece is a long-running series, dating back to the late ’90s. As fans of the anime, we’re always excited to see our favourite characters make it to my portable video game console. Courtesy of Namco Bandai, One Piece: Romance Dawn is bringing its pirate wackiness over to the Nintendo 3DS. But how does it actually play out?

Attacks are what make the gameplay in Romance Dawn exciting. Here, executing combos is very satisfying thanks to the clever allocations of the special attacks within the different face buttons. As such, the controls are very easy to digest.

Unfortunately, determining what exactly the combat system and character development are behind Romance Dawn can be difficult. There is no information readily available that gives you insight on such important details as how accessories work or what the statistics do. So in one sense, One Piece: Romance Dawn is easy to pick up and play, but when it comes to solving the complexity of the game, you’re pretty much on your own.

Surprisingly enough, this Nintendo 3DS title is not presented in 3D. But it shouldn’t be that big of a deal, right? Well, the cut scenes themselves consist of static images with text appearing on screen. Here, they drag on for a very long time and can be painful when there’s nothing exciting or enjoyable to watch. Then when you jump straight into the gameplay, you’ll quickly notice the grainy texture quality and bland environments. The graphics wouldn’t be that bad if the 3D effects were to kick in, but once you remove that it’s pretty much downhill from here.

The Japanese voiceovers are where the redeeming qualities lie, though it’s not going to completely win over players’ hearts. Meanwhile, both the music and sound effects do help a little to provide some excitement during the experience. However, the audio implementation can only go so far in that respect.

One Piece: Romance Dawn primarily plays out with a turn-based combat system. You can move each of your three characters anywhere on the battlefield as long as you don’t go outside your boundaries marked by the red and yellow indicators — doing so would result in penalties. Afterwards, you can enforce your combo attacks. This is where the interesting aspect of the game kicks in, especially when you gain new skills.

With various attributes, including HP, power, speed, and luck, there’s a degree of detail that will get players really engaged with such an RPG system. As you progress further in the game, you’ll have plenty of opportunities to build up each of your characters’ stats. For instance, enemies will occasionally drop accessories that’ll alter your attributes. You can also purchase items within a shop to make this possible. As a result, there is a lot of depth in Romance Dawn that draws players in and potentially retains their attention.

However, the battles themselves can also be quite frustrating and unfair. There are times when enemies are not penalized for “breaking the same rules” that you’re forced to follow. For example, if you take too long during a turn, you’ll get penalized, but if your opponent does the same thing, nothing happens.

Romance Dawn can get very challenging, for the better that is, with the increasing number of enemies thrown in. Nonetheless, it seems that the game lacks diversity in the type of opponents that come at you. Fortunately, the boss battles can be a fun and uplifting ordeal to encounter. So there is always something to look forward to in the end. While the gameplay can get repetitive very quickly, there’s still fun in exploring the worlds and developing your characters.

One Piece: Romance Dawn has its ups and downs, so it’s not the best game out there. Essentially, the experience is split between the lackluster presentation and engaging RPG battle system. At the end of the day, Romance Dawn is not a bad game, but it may not win you over if you’re not already a devoted fan.

By Uma Smith
This entry was posted on Friday, March 14th, 2014 at 3:19 pm and is filed under Uma Smith, Video Game Reviews. You can follow any responses to this entry through the RSS 2.0 feed. You can skip to the end and leave a response. Pinging is currently not allowed.