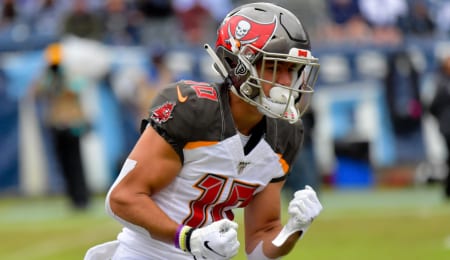 Whether you love Tom Brady (perhaps because of that perfect strike to help clinch the NFC Championship — see video below) or hate him, this might be the last time we see him in a Super Bowl. To have him and soon-to-be living legend Patrick Mahomes duel it out in a rematch of the AFC Championship game of 2018 is what all football fans wanted. Are we about to witness a changing of the guard after two decades?

Winning three playoff games on the road is no easy feat, but it seems like old hat for Brady, who only did it four times with the Patriots before repeating the trick this season with the Bucs. Now, ironically, Tampa Bay will get home field advantage in the Super Bowl, but Brady is showing no weakness after overcoming the Saints and Packers — albeit with three interceptions courtesy of Green Bay’s defense.

He will take advantage of Kansas City’s depressed defense, ranked 16th and 31st in pass and run defense D.V.O.A., by throwing deep to Mike Evans or Scotty Miller in a plus-size and plus-speed matchup. We expect Brady to rack up the yards, but don’t be surprised if the game is closer than expected because of an interception or two.

Tampa Bay running backs Leonard Fournette and Ronald Jones II are about to have monster days themselves. While both running backs are interchangeable, Fournette has the higher PPR ceiling. Both have been muted in the playoffs so far, with Fournette averaging four yards a carry and Jones averaging just three. That’s about to change. Never mind the fact that Kansas City ranks 31st in the league in run defense D.V.O.A., it also needs to prioritize stopping the deep shot from Brady, which should translate into a great day for the Buc backfield. Get your bibs on, boys.

As we predicted, Godwin put in a noteworthy turnaround performance against Green Bay, hauling in five receptions from nine targets for 110 yards. Unfortunately, he is likely to be erased unless Kansas City plays another style of defense on Sunday. Godwin plays nearly exclusively in the slot so he’ll square off against the rotating DB trio of Tyrann Mathieu, Rashad Fenton and most likely L’Jarius Sneed, all of whom are capable in their own right.

Outclassed in weight, height, speed and catch radius, Chiefs CB1 Bashaud Breeland should write his obituary this week. Evans hasn’t done much to inspire confidence in the playoffs, but that’s likely been matchup issues. Expect him to put up Jerry Rice-like numbers as our contrarian Super Bowl MVP pick. Although Miller is a bona fide deep threat, we expect Kansas City to shut down his route by knocking him around at the line of scrimmage. Expect a few deep balls for him in the event of blown coverages.

Gronk is a legitimate blocking tight end. Over the last two games, he averaged 80 per cent snap rate, but only mustered a total of two catches from six targets. On the other side of coin, Brate has heated up over the last two weeks, hauling in seven receptions from 10 targets and converting it into 69 yards and one touchdown. Both have meager red zone stock and little else.

KC Dialed Back on the Deep Throws

HC Andy Reid installed the perfect strategy for Mahomes and the Kansas City Chiefs last Sunday by dialing back the deep shots, taking advantage of Buffalo’s inability to cover man-to-man. Mahomes’ air yards to YAC split was easily the widest of the season, relying especially on Tyreek Hill on shallow YAC-inducing routes. On paper, Mahomes has a much tough matchup against Tampa Bay’s fifth- and first-ranked pass and run defense D.V.O.A. than his 43-year-old counterpart.

Moreover, Tampa is unlikely to send more than four rushers at Mahomes, forcing him to dink-and-dunk (carefully) to beat the defense. He is also unlikely to run effectively against Tampa’s incredibly athletic linebackers — especially given that lingering turf toe injury.

Darrel Williams has the hardest matchup of the game, facing off against Tampa Bay’s premier run-stopping unit. While Reid does an exceptional job at running against tougher opponents (see last Super Bowl for an an example), Williams, Clyde Edwards-Helaire and Mecole Hardman are not expected to generate much rush EPA this game. We do expect Reid to include more dump-offs and screens to take advantage of Tampa’s aggressive downhill nature.

We know when our balls are in someone else’s fists. We were wrong about famed child abuser Hill, who went on a tear over the last two weeks, combining for 17 receptions for 282 yards. We do not expect the Buccaneers to play a lot of man coverage but we do forecast Hill being bracketed most of the game by CB Carlton Davis and another defensive player. Even so, we love Hill’s skill set against a good but leaky Tampa secondary.

Kelce makes up the other half of the passing attack. In the last two weeks, the stud tight end has pulled in 23 catches for 227 yards and three touchdowns. That is insane. We expect another bracket this time with LB Lavonte David and Antoine Winfield Jr. (whose health is trending the right way). Expect Kelce to have a more modest day with an elite chance at a touchdown.

Originally The Band backed Ronnie Hawkins before going off and doing its own thing. Rock of Ages was put together from its live recordings at the Academy of Music in New York City, from December 28 through December 31, 1971. From this effort comes “The Shape I’m In,” one of the few tracks on the album that does include a horn arrangement.

By Lucas Chan
This entry was posted on Saturday, January 30th, 2021 at 3:27 pm and is filed under FOOTBALL, Lucas Chan, Super Bowl. You can follow any responses to this entry through the RSS 2.0 feed. Both comments and pings are currently closed.