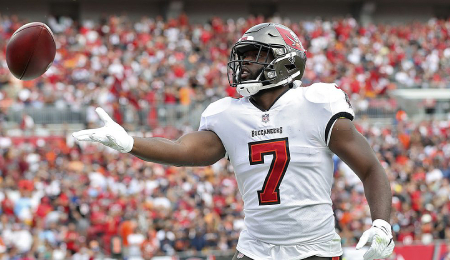 The Bucs could use a big game from well-rested Leonard Fournette on Monday. (Mark LoMoglio/AP)

The Tampa Bay Buccaneers missed a chance to finish with a winning record when they lost 30-17 to the Atlanta Falcons in Week 18.

You’ve got to go back to 2010, when Seattle won its division with a 7-9 mark, to find the last time this ignominious feat occurred.

But by virtue of being a divisional champ, the Bucs get to host their Wild Card game on Monday night against the Dallas Cowboys. FanDuel Odds have Dallas as a 2.5-point favourite to advance.

Let’s examine if Tampa Bay can err… buc the odds to advance to the Divisional Round despite being a sub-.500 club.

First, we’ll start with the passing game, which seems to have lost its deep threat capability since around October. We know that quarterback Tom Brady — despite breaking his own NFL record for completions in a season — struggled through one of his worst seasons ever. More on that later.

For now, let’s look at wide receiver Mike Evans, who statistically enjoyed another fantastic season. However, he was a Fantasy black hole in Week 18, failing to catch a single pass before an illness sent him to an early shower.

Back in Week Eight of the 2021 season, we advised you to sit Evans and more or less nailed that as he only pulled in two receptions on four targets (although a touchdown somewhat took the sting out of that showing).

This season, while he was otherworldly in Week 17, between November 6 and December 11, he failed to top five receptions or 59 yards receiving once. That’s a big chunk of the season when Evans was not exactly lighting it up.

That monster showing in Week 17 really masked the fact that Brady to Evans hasn’t been the most reliable connection this year. Six touchdown passes vs. seven interceptions for Brady when he targets Evans tells the story quite succinctly. Sure, behind this issue has been an offensive line that hasn’t protected Brady as well as it could have, and that’s manifested itself in a more conservative pass attack.

Still, given Evans’ pedigree and opponent, he remains a decent WR1 option for Wild Card weekend.

Speaking of Brady, after he broke the record, he also took an early seat in this meaningless game for the Bucs. Still, with the loss, his perfect career mark (11-0) against Atlanta now has its first blemish.

As mentioned above, Brady regressed significantly this year, throwing 18 fewer TD passes than he did in 2021 despite more completions. Not that we can solely blame him, but it’s worth noting that this is the first time in his illustrious career that he’s been on a losing team. Again, given the available options, we still consider Brady a top 10 QB for this weekend. We’re sure he’s at the top of Jane Fonda‘s rankings (see video below), but there’s a half dozen QBs we’d prefer to roster this weekend. Still, who knows? There’s great intrigue here given that this could be the GOAT’s final game ever.

Feature back Leonard Fournette also barely played in the finale, capping a down season in which he had the second-lowest YPC average of his career while matching his lowest TD output ever — despite missing just one game.

We correctly predicted a huge game for him in Super Bowl 55, but for this weekend, consider Fournette a middling to low-end RB1.

While a big offensive showing from the Bucs will go a long way this weekend, at the end of the day, this game will come down to whether Tampa Bay’s D can slow down a Dallas offense that scored more points than anyone over the last eight weeks. Back in Week One, the Bucs limited Dallas to just three points, but that may as well have been years ago.

Creedence Clearwater Revival is often referred to by shorter forms Creedence or, more commonly, CCR. Here’s another track from Chronicle: The 20 Greatest Hits released by Fantasy Records, this time with “Lodi,” originally from 1969’s Green River.

Jones is capable of driving the ball, has strong playmaking skills, can pitch in with steals, and has flirted with double-doubles in three of his last four games. Yes, he’s mostly been a backup this season, but has still managed to enjoy his finest scoring campaign to date.

In fact, his nine points in nine games heading into Friday’s action ranked him atop the Hurricane leaderboard over this stretch — not too bad for a recently turned 34-year-old. Staal has seen more PT as the season has progressed and he’s rewarded the ‘Canes’ faith with production. While the veteran is playing well, he needs to be owned. Staal is never going to score a ton of goals, but remains a useful Fantasy option for now.